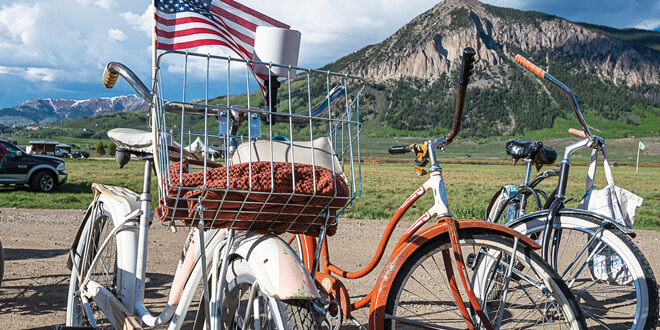 Quick thoughts before the end of the good season

June around Crested Butte is as close to perfect as anywhere on the planet. One good day here is worth five great days anywhere else. The longer days, the cool nights and mornings along with warm afternoons are pretty stellar. Plus it isn’t off-the-hook busy…yet. I hope it stays that way. July and August is a time for people and revenue but locals need their time to breathe.

And of course June won’t stay that way. It seems the trajectory we are on is gaining speed and not slowing down. As people continue to discover June they will flock here as they always have. June and September are pretty spectacular and have been discovered. I’ll continue to lobby for keeping May and October for us.

There is now a general anxiety about what we as a community can expect this summer tourist season. The anticipation is that we’ll see thousands more people here than we had last year — which was a record breaker. Given the fact there will be fewer places to grab a bite in town, that could make for some ‘hangry’ people every evening as they have to wait two hours (or more?) for a table on Elk Avenue. Think reservations!

Oh, and as I walk out on the deck of the News Tuesday afternoon I see summer has arrived. It is hazy as heck so the wildfires near Montrose and in Arizona must be blowing smoke up to our mountain valley. Of course summer is different than it used to be with regular smoke instead of regular monsoons. That does not bode well for the long-term health of the Western U.S. and is just another reminder of how we are dealing with drought in this high mountain valley. Local emergency personnel are busy preparing for a possible wildfire not in Arizona but in Gunnison County. Any bit of fire in the local backcountry would be scary given the dry forests all around us. Emergency plans are being drawn up and evacuation plans are being considered. We need more rain.

I like the Crested Butte council’s choice to replace Laura Mitchell as a council representative. Jasmine Whelan may be new to the local political scene but in her first intro to council she came across as really smart, prepared and enthusiastic. The fact she represents a new demographic in town is a big plus as well. Based on my first impression, I think she has the ability to contribute in a big way to the council and she appears ready to get to work and seriously address a quickly changing town.

At the same time, all the people that have thrown their hat in the ring over the last six months to replace departing councilmembers are strong community contributors as well. The candidates who showed interest in serving on council to replace the last two departing members all came with lots of Crested Butte experience and that can be handy in the upcoming November election. I am excited that there are so many people who have shown sincere interest in jumping into the local political ring and look forward to a robust election season this fall. There is opportunity here.

While taking a fast weekend trip to Minnesota to visit family it is obvious people are ready to mingle after 15 months of pandemic isolation. The plane was full and the airport bars packed. In fact every place was packed. There are a lot of people outside this valley. Too many frankly, so it’s always good to come back to our slice of paradise.

We did take the opportunity to visit George Floyd Square in Minneapolis. It is a pretty powerful place actually with the memorials, murals and tributes to not just Floyd but other Black citizens who have died at the hands of police. It is a good reminder that Floyd’s death a year ago has changed the world and in particular this country. Congregants of a nearby church were giving away water and drinks while providing opportunities to chat. Local businesses, including the store where the incident started, were open. The murals, the fist sculptures, the boarded-up windows, the flower gardens, all poignantly brought home the struggle that people of color deal with on an ongoing basis. That square represented a change in awareness for our fellow citizens who have dealt with racism and a caste system in this country for far too long. It will be interesting to see what the local Black Lives Matter Community Coalition is planning for Juneteenth.

The CB council this week declared housing to be an official “disaster emergency” so we’ll see what else they come up with. It seems there are some “emergency” type summer options available if the North Valley councils want to take immediate action. Some people for years have chosen to camp and work in the summer but that option is being hamstrung by a backcountry crackdown so…Mt. Crested Butte has a pretty nice 26-site primitive campground by its town hall that is not being used at the moment. That council could decide to let it be used by working locals. And if that fills up in a real emergency, perhaps the gravel pit in CB could host campers and tents for employees working in town that like living in the great outdoors. Just a thought…

Speaking of thoughts, we only have a week or two before summer tourist mayhem commences, so get out while you can. The weather is perfect, the place is not yet overwhelmed and you can still grab a bite to eat relatively easily (and use your cell phone relatively easily as well). Enjoy the end of the good season…