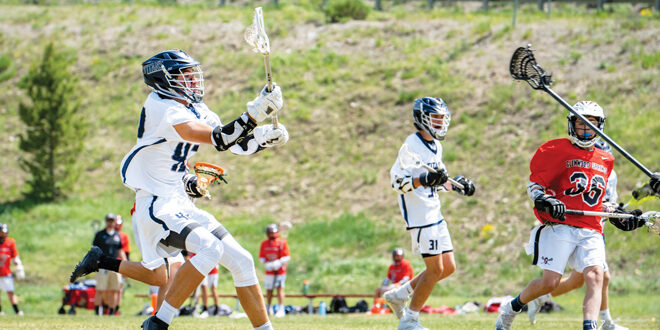 After spending their entire season playing on the road, the Crested Butte Titans lacrosse team hosted the first high school lacrosse game ever in Crested Butte on Tuesday, June 8 and handed the Glenwood Springs JV an 8-2 loss.

“I’m very excited,” says coach Buck Seling. “It was nice to see people out there enjoying the game and hopefully this continues the growth of the program in the valley.”

Slowly but surely, the Titans lacrosse team has gained steam in their first year in existence. After players trickled in from other sports, they started checking off wins with a nearly full roster of players showing up for games and practices. Still, it hadn’t taken complete hold yet as participation was erratic while the coaches and players continued to build a level of commitment to the team.

Such was the case when they headed to Grand Junction on Saturday, June 5 for two games with several players missing leaving them with 15 total to play a doubleheader with temperatures in the mid to high 90s.

The Titans started the first game against Fruita Monument JV strong to build a 3-0 lead but Fruita’s deep bench and quality play, as well as the heat, eventually took a toll on the Titans as they fell 8-4 with goalie Logan Breiner recording 10 saves in the game.

“Fruita has a good program and I think the heat just wore us down,” says Seling.

After some shade, water and Gatorade time, the Titans returned to the field later that day to face the Grand Junction JV. Crested Butte opened up an early 4-0 lead this time and despite losing their top scorer to heat exhaustion in the first quarter, they rallied to an 8-2 win with Breiner recording 19 saves in the game.

“He just stood on his head in goal all day and we had good play from several players, I was really pleased with their effort,” says Seling. “We were able to get scoring from six different players.”

Then came the hometown stand as Crested Butte hosted Glenwood Springs at the CBCS field. With a stuffed roster, energy was high heading into the game.

“We had 19 players and the kids were very excited,” says Seling. “We were also able to get in a really good practice with everyone the day before the game and work on some stick skills and walk through some things.”

Crested Butte opened the game patient on offense and forced a turnover with a solid ride but Glenwood eventually pushed into offense and had an early look on net but Breiner stuffed the wide-open attackman. One minute later Glenwood converted though and finished the first quarter up 1-0.

The Titans tied it up in the second quarter when Riley Davis ran off a pick to bury his shot and Brendan Hartigan produced a couple more chances but the Titans struggled to put shots on net and the two teams entered halftime tied 1-1.

“We had some kids that had to sit for a quarter for missing practices so the flow of the game wasn’t there,” says Seling.

Crested Butte then dominated the third quarter to outscore Glenwood 3-1 and build a 4-2 lead. They started it off forcing a turnover and Kody Bodine scooped up the ground ball and headed straight for goal. Thirty seconds later Davis scooped the ball up as a long stick middie and carried onto offense to feed Bodine for his second goal of the game. Just one minute later the Titans struck again as Lance Lakoski found John Penny open with a pass and Penny fired it past the Glenwood Springs goalie for a quick 4-1 Titans’ lead forcing Glenwood Springs to call a timeout.

“Their settled defense was very strong but we got a couple transitional goals and things started clicking,” says Seling.

The break gave Glenwood a chance to regroup and they ran a play right off the bat to set up their second goal of the game cutting into the Titans’ lead prior to the end of the third quarter.

That would be the last of the scoring for Glenwood Springs though as Breiner came up with a couple more saves, the Titans clamped down on defense.

“Our long pole defense is pretty strong and we have Adam Collins out there on defense and he’s like having another coach on the field,” says Seling.

The Titans got back to scoring one minute into the fourth quarter when Hartigan found Bodine cutting across the front of the net with a pass. Bodine held off two defensemen to then spin and score for a 5-2 lead. Three minutes later Ace Gaither then sent the ball across the top to Hartigan and he battled past three Glenwood Springs players to score and followed that up two minutes later with his second goal of the game.