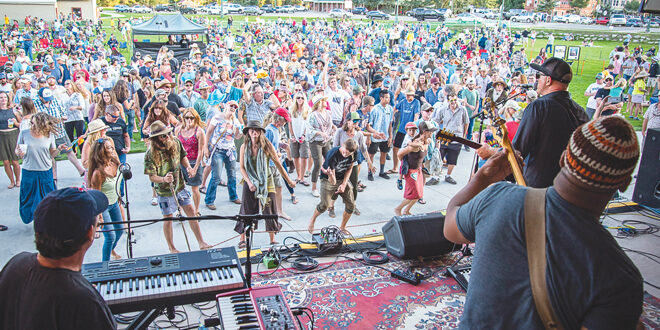 Summer events are back in full swing in CB

The CBMR bike park opens this weekend, live music is back and festivals are popping up like wildflowers — it’s starting to shape up to look like a normal summer again here in paradise. This town embraces any opportunity to hold a good event, and the summer lineup is stacking up as local organizers have the green light of the Coronameter to move forward with events, festivals and gatherings.

One of the most highly anticipated events is the return of the free Alpenglow outdoor concert series. And the Center for the Arts staff is perhaps the most thrilled. “We’re all incredibly excited for Alpenglow,” said associate director of development Jillian Liebl. “It’s that magical place where long-time locals and part-time residents and visitors and young and old can all come together.”

This summer’s Alpenglow lineup will focus on local bands, including Easy Jim and Lizzy Plotkin. “Our local musicians and local artists have also had a tough year and we wanted to support them first and foremost,” said Liebl.

Alpenglow will also feature the Brothers of Brass, the band who helped lead the Black Lives Matter Thrive Rally down Elk Avenue last year. “This time around we’re bringing all 10 members for a full set on the Alpenglow stage,” says Carrie Wallace, the Center’s new performing arts coordinator. The first concert hits the Alpenglow stage on June 28.

The Center is also working with the Melanin Mountain Project to host a free Juneteenth celebration, the town’s first ever Juneteenth event. The event will feature black poetry, art and performances, including an African drumming performance by Etienne Tolno.

Though nothing is set in stone, the Crested Butte-Mt. Crested Butte Chamber of Commerce is exploring all of the options to hold a Fourth of July Parade on Elk Avenue on Sunday, July 4. According to executive director Scott Clarkson, critical details are currently being worked out and if a parade is to happen, volunteers will be needed. If interested, volunteers should contact the Chamber at cbinfo@cbchamber.com. Updates will be posted on the Chamber’s website.

The Town of Mt. Crested Butte will be presenting a fireworks display on the mountain for the Fourth, and is also working hard to bring back its Music on the Mountains free concert series at the base area. Town manager Isa Reeb says they hope to have the first band on July 28, and have six total shows.

The Crested Butte Arts Festival is back to in-person action this year with a new location at the Crested Butte Community School parking lot featuring more than 130 exhibiting artists in 12 fine art mediums. It will also be a ticketed event this year to support the non-profit, $5 for a day pass or $12 for a weekend pass.

The Chamber of Commerce plans to hold the Chainless Race this summer, but it will not take place in June and a different date is still in the works. Because of the expected traffic coming over Kebler Pass due to the Little Blue construction along Highway 50, Gunnison County Public Works and local law enforcement have advised planning for a later date. “We’re looking for a time that works for folks between peak summer and foliage,” said Clarkson.

Some events will continue to embrace the virtual aspect, while still holding in-person gatherings. The Crested Butte Film Festival plans to let pass holders enjoy all 75 films and discussions from the comfort of their own homes September 24 – October 3. Then individual tickets can be purchased for select in-person film screenings, discussions and events September 24 – 26.

There’s plenty more events filling in, and now’s your chance to reconnect with the community, mask free. So get out there and support Crested Butte’s local events!

Snapshot of the Summer 2021 events lineup:

• Pedal Your Butte Off – September 11