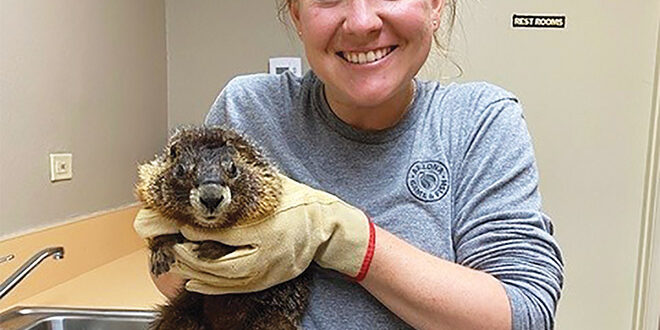 Returns via chartered flight with entourage

It is far from unusual these days to see private jets or chartered planes bringing in visitors to the valley. Corporate bigwigs and celebrities like the convenience and specialness of a private flight. But perhaps one of the more unusual situations was experienced Tuesday, June 29 when a chartered plane flew in a furry native of Gothic from Arizona complete with entourage and press coverage.

Fork, a yearling female marmot who resides in Gothic, Colorado—the home of the Rocky Mountain Biological Laboratory (RMBL)—disappeared approximately a month ago and then made her appearance in Mesa, Arizona last week. Mesa is well outside the normal territory range of yellow-bellied marmots living in Gothic.

Sharon Lashway, non-game specialist with Arizona Game and Fish was called in about the appearance of what might have looked like a “land beaver” to Phoenix suburbanites. Sharon successfully trapped Fork and using the information on her ear tag traced Fork to Gothic.

Fork “Kardashian” went up a few notches on the celebrity ladder with her travel story and arrived back in Gothic on Tuesday on a chartered plane with an entourage of three. Lashway, the pilot and a press person from the Arizona Game and Fish Department accompanied Fork to her mountain home on a state Game and Fish plane used for wildlife work. There, they recorded her reentry to her native home.

RMBL is host to one of the largest collections of long-term field studies, providing unique insights into a changing world and Fork is part of a population of marmots that have been studied at RMBL since 1962. That project is currently led by marmot momager (it’s a real term—look it up) and UCLA professor Daniel T. Blumstein.

“While pretty much all male marmots leave home as yearlings, only about half of females disperse. Females who remain at home are particularly important to sustaining the population. Our previous work showed that socially-connected female marmots are less likely to leave home and Fork was very social,” said Blumstein. “Marmots sometimes climb under cars, which can lead to an unexpected trip, most of which are fatal. This is the first marmot we know of to travel beyond Colorado. Fork must have survived at least a 10-hour ride.”

Blumstein added that, “Personally, I think she headed to the beach because it was so hot and dry in Gothic at the time. She must have made a wrong turn to end up in Phoenix! We’re thrilled to have Sharon bring her back and are keen to see if Fork sticks around or disperses on her own.”

It was not confirmed if champagne was served on the charter flight…but would Fork really have it any other way?