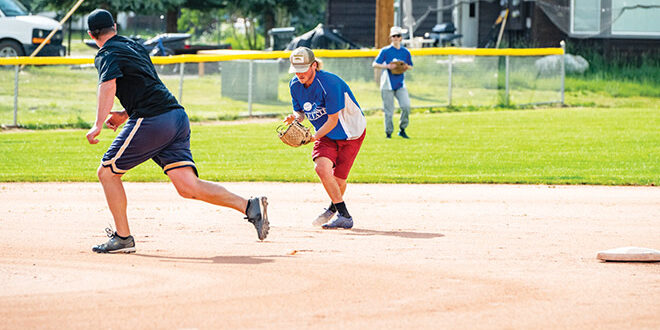 Now I know it’s nothing new to draw the line between a rocket and the shape of male genitalia but Jeff Bezos took it to a whole new level. Take a look at the rocket he flew in and you tell me. Not only that, he didn’t even orbit or land on anything. He basically two bump chumped space. And he wasn’t even the first billionaire to reach space (FBTRS). As if that’s a thing, which apparently it is. Richard Branson was the OG FBTRS when he did it July 11. Even worse, both Branson and Bezos “earned” their “astronaut wings” for the effort.

Then, the media, of which I am a part, had the audacity to cover what Bezos and his crew said when they got to space and referenced the famous line of Neil Armstrong spoke when he actually stood on the moon in the same article. To put what Bezos did in the same article as the accomplishments of real astronauts is blasphemy.

Hey Bozo, I mean, Bezos. No, actually I mean bozo. Cool rocket buuuutttt, where in the hell are the ballet shoes my daughter ordered?
Meanwhile, as bozo continued celebrating his 10-minute hero effort in space, there was something far more pressing, and arguably more important, happening here as Elevate and Pitas Meatsticks faced off Tuesday evening at Tommy V Field to decide who would take the regular season title and earn the top seed heading into the playoffs. Both teams came into the game undefeated so it was all down this one game, for now. And, it lasted more than 10 minutes.

The Meatsticks have a legacy of winning and they carried that legacy into the top of the first inning spraying the field with base hits and racking up five runs with more to come. That is until Elevate second basewoman Halston Gage scooped a hot grounder and flipped to Sam Reaman covering second who then fired to first to turn the 4-6-3 double play and stop the bleeding.

Elevate stepped up to score three runs as CJ Hoover and Liz Wigginton both punched base hits and Reaman pushed them home with a two RBI error-assisted triple. Paige Rumery tacked on a third run with a RBI single, but a base running miscue two batters later stopped Elevate in their tracks leaving them down two runs short but with plenty of game left.

The Meatsticks continued their hitting ways but run production continued to elude them. Melissa Mason got things going with a single and additional hits from Heather Duryea, Roland Mason and Emily Crooks scored two more runs but that was it leaving them well within striking distance, especially at Tommy V Field.

The same was true for Elevate though. While Jared Martin, Hoover, Wigginton and Reaman all found gaps with hits to score two runs, a sliding grab by Drew Stichter in shallow left put an end to a potential Elevate rally.

Things then started to look a little dubious for Elevate as the Meatsticks continued to tack on a run or two over the next three innings. The Elevate bats were nearly non-existent and the Meatsticks slowly but surely started to pull away building a 10-5 lead by the fifth inning.

Michael Villanueva looked to spark additional Meatstick offense when he led off with a triple but the Elevate defense stepped up when needed to shut down the next three batters leaving Villanueva stranded on third.

Having survived, Elevate started to chip away at the Meatsticks’ lead once again. Reaman and Kelly Jones led off with back-to-back singles, a sac fly from Christian Allen pushed them another base and then Rumery and RJ Spinella pushed them home to pull Elevate within three of the Meatsticks.

The tables continued to turn in Elevate’s favor starting with the effort of Spinella in right field. Sanders crushed a shot to deep right field and Spinella took off after it to make a leaping corked out 180 spinning grab for the out. Duryea came up empty at the plate next and then Jones chased down a fly ball at the fence in foul territory in left field to hold the Meatsticks to a whole lot of nothing.

Elevate stayed on course in the bottom of the sixth inning. Jared Martin led off with a single but an errant throw caught Brittanie Brown square in the shin leaving a dent, forcing her from the game and temporarily harshing the buzz of all in attendance.

While noticeably quiet at the field following the injury, Elevate remained in the zone. Matt Savard destroyed a two-run home run to straightaway center field, Allen drove in more with a double and Rumery got dirty stretching for a two RBI double to put Elevate on top 13-10 heading into the top of the seventh inning.

For the third straight inning the Meatstick bats were strangely silent as they went quietly into the evening without a single hit in the top of the seventh to fall 13-10 leaving Elevate to take the top spot heading into the post season.

Which means something, but not everything, because playoffs are where things really matter and it’s anyone’s title to take. 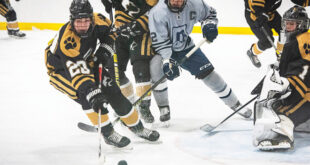 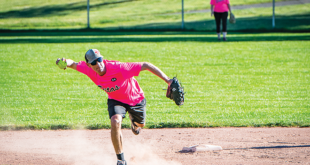 Lend a hand, bring a mask, wear slacks by Than Acuff It’s that time of …