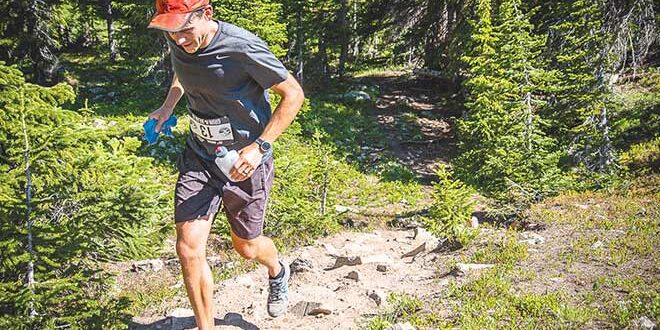 The Grin & Bear It was cool before trail running had taken hold worldwide becoming the latest fitness rave. Back in the early days there were no Hoka One Ones, no running vests, no Strava, no blogs, no training tips. There were short shorts, but there were also cutoffs, and runners were rewarded for their efforts with beer. At least that’s what it looks like in the photos.

Thirty-eight years later, things have changed quite a lot in the trail running world but the Grin & Bear It keeps one foot in the past while remaining current to accommodate those that want a little more out of their running race and CB Nordic is hosting the 38th annual Grin & Bear It on Saturday, July 24.

In an effort to remain in stride with the trail running trend, CB Nordic added a 25-kilometer loop course option using the Baxter Gulch Trail and Carbon Creek Trail before turning down the Green Lake Trail to the finish line.

Still, they keep things “real” with the classic course option and whether you run the loop or the classic, CB Nordic will provide a plate of French toast and some ice cold Eddyline beer once you are done.

As of press time the loop course seems to be the more popular among registrations but signup for the classic course remains steady. Ninety runners of all ages and abilities are signed up with room for 150 total, so Arell encourages people to get in while they can.
“We prefer people register ahead of time but we will sign people up the morning of the race if there are spots left,” says Arell.

In addition, there will be an “awkward load” tied to a buoy in the middle of Green Lake up for grabs whether you run the loop or the classic race.

“Whoever brings that back to me will be crowned with something special,” says Arell.

The Grin & Bear It also gives those that are planning on running in the Summer Grand Traverse Mountain Run a small taste of what they are in for.

“The Grin has a lot to offer in terms of ascent and technical descent,” says Arell. “It’s a proving ground for those attempting the Grand Traverse Mountain Run.”

Speaking of which, the Grand Traverse Mountain Run is completely full already but there are some spots left in the mountain bike race. Those races are scheduled for Saturday and Sunday, September 4-5.

For more information on the Grin & Bear It or to register, check out cbnordic.org.