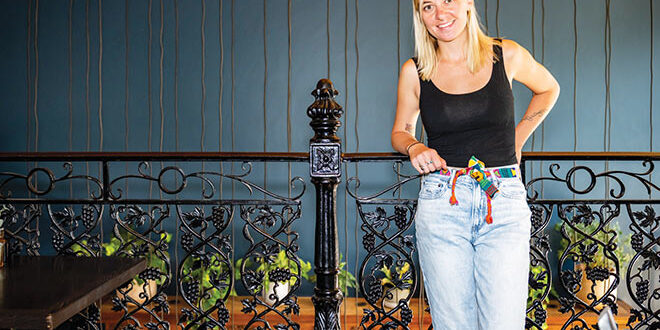 “I’m living out of my car and couch surfing,” Alysha Joaquin says with an entirely big smile. Not that it’s easy, nor, she feels, should workers have to live without basic necessities like a bathroom, shower, running water or a roof over their heads, but for now, this hard-working Buttian will keep the blinders on and continue. “We’re the people who interact the most with the tourists,” she rightfully claims.Born in Wheat Ridge on the Front Range, her parents moved her to Bemidji, Minnesota, a little town that has similar aspects to Crested Butte, she says, because there’s tourism, lakes and woods and lots of outdoor activities. “But there are no mountains,” she laughs. “I’ve always lived in cold places my whole life and always dreamed of being a beach bum, but it’s never happened.” As a toddler, she lived in the Bemidji State University dorms while her mom attended school there. After graduation, her parents moved to Lansing, Michigan, then Iowa, where her parents went their separate ways and Alysha went back to Minnesota with her mom, spending holidays and summers with her father in Colorado.

Back in her small-town country life in Bemidji, Alysha spent many days on the lake. “I’d visit friends across the lake by taking the canoe out,” she remembers, and at 10 years old, she’d be jumping off a bridge into the lake with friends, or tubing behind a boat or playing in the Mississippi River headwaters at Itasca State Park. “I’d ride my bike on all the trails. You could eventually make your way into town. One of the similar aspects I see between CB and Bemidji is that the kids are free range and independent. I basically raised myself. I was self-sufficient because mom was working a lot.”

She also spent much time with her grandmother who lived an hour north. “We’d go out on the dock every morning with peanut butter and mayo sandwiches and spend the whole day out there.”

She was 12 when she moved to Colorado with her father, visiting mom in Bemidji for holidays and summers. “Dad was more strict. It was the middle of a school year and I was put into Catholic school with about 20 kids in my sixth grade class,” she explains.

Alysha was in culture shock after her independent upbringing. ”I was probably this little demon that my dad didn’t understand,” she says.

By the end of the school year, she was adamant about never returning to the parochial school. “The nuns said I was teaching the other kids (things good Catholic kids shouldn’t know) and corrupting them. They didn’t want me back either,” she laughs. She and her dad came to a compromise and she enrolled at Frontier Academy, a charter school in Greeley. “It was a lot more comforting than the Catholic school. I had really great and inspiring teachers there and that had a lot of impact on me.”

Alysha jokes that she has the gift of gab, and through deep discussions about life, the universe and everything with her teachers, she also discovered her interest in understanding people and their cultures. When she graduated in 2010, she decided to take a gap year, moving in with her bestie and working at a pizza joint in Greeley. When her family offered to pay for some college, Alysha signed up for summer classes. ”I didn’t know what anthropology was but the description sounded cool. I really liked it, but I still wasn’t ready to go to college. I was a little hippie during this time,” so naturally she scored a second job at Mellow Yellow, a head shop, and went full-time there in 2011.

Alysha felt the need to head back to a place she could connect with – a place of water, forests and mountains. She applied to Western State College (now Western Colorado University, WCU). “All the reasons that I had for not attending college were still valid.” But she says, “I wanted out and didn’t have a ton of money saved up because I spent it all on concerts and festivals.” She notes that this was especially easy growing up in an area with venues like Red Rocks and Mishawaka Amphitheatre. “Something was appealing about going somewhere I didn’t know anything about,” she says of Gunnison, arriving in the summer of 2013. “WSC has an excellent anthropology department,” she states. She graduated in 2018 with a BA in Anthropology and a minor in Sociology.

Alysha began working at the Secret Stash in the spring of 2014. “I had never skied before, but after my second year here, friends got together to get my equipment and I was able to learn to ski. I’ve never met anybody who tries skiing and doesn’t like it.” With most of her friendships built outside of the college, Alysha started to think about whether she could find her place in this community. “At this point in my life, I’m looking for a home rather than just a house. I’m asking, do I fit in here? I’m not a rad ripper or a business owner, or a community leader or even an uber athlete, so sometimes, I feel as though I’m challenged to justify what I’m doing here.”

The deciding factor for her was that many aspects of the area reminded her of the North Woods she grew up in. “I feel safe here and there’s a lot of like-minded people. I like to travel and having the off-seasons. I like the slow-moving lifestyle. CB time is like five minutes later, it’s not hustle and bustle. I have time to sit with my thoughts. I’m able to walk everywhere. There were no issues finding a place to rent when I moved to CB, although the rise of that issue had already started at that point but there were still available and affordable places you could find.”

Until recently, Alysha was living with three other roommates and three dogs in a cute little condo in town with a tiny yard. Each of the four were paying a reasonable $550 per month. “And I was grateful for that. I was in New Orleans, traveling during off season. I had been there for only three days when my roommate forwarded an email from the condo owner. They weren’t going to renew our lease.”
They were given one month notice, beginning in May this year, to vacate by June 15. Two of her roommates, a couple, found a place to stay until August but are then leaving the valley because, she says, “Housing is hard to find and the vibe of town has changed.” The other roommate luckily found a place in CB South.

Alysha was able to get a storage unit, which is also hard to come by. “I reorganized my whole life and decided what was most important to me and I downsized. I have a couple laundry baskets in my car that have my clothes and immediate toiletries,” she says of her pared-down life. She dropped off her 8-year-old dog at her grandfather’s ranch in South Dakota, ”Where Honeybee can play in the creek and with her sibling,” she says of the furry bestie who’s been with Alysha since she was a puppy.

Essentially homeless, but working multiple shifts, two days a week at Secret Stash and three nights at the Breadery, Alysha’s fortitude is admirable. “You become more versatile. You’re more resilient when you’re more versatile,” she says. She takes showers at friends’ houses and notes, “You don’t have a consistent bathroom or a closet full of clothes, where you can get ready and primp yourself every day, but you realize how little you need to function and be happy.”

Recently, Alysha worked out an arrangement with a second homeowner, an accessory dwelling that mostly sits unused, a place where she can stay sporadically. She was there for a couple weeks in June until family came for three weeks in July. “It helps a lot. It’s less than ideal but it’s something.”

Creatively, Alysha aspires to writing. “I find solace through humor and being able to laugh at yourself. One of my long-time goals would be eventually to perform stand up comedy. One of my favorite things to do is laugh with my friends.” Laughter, she feels, is the universal language. “Laughing has a lot of benefits to your metal health and it’s a really good way to communicate and understand people.”

Alysha admits she has no idea of what she’ll do when winter arrives if she still can’t find an affordable place to live. She talks about the possibility of fulfilling that beach bum dream, perhaps in Costa Rica.

”There’s a lot of uncertainty and instability and not everyone, given this unique situation, would be able to make this work for them. But Crested Butte is the first place I built a home for myself. I found it on my own. I like the lifestyle here, the seasonal changes, and my biggest interest in life is traveling, being able to leave, to see other cultures and then being able to come back and regroup in a place that feels like home.”