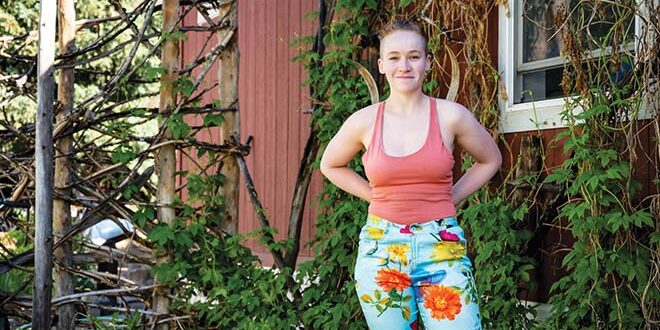 nna Fenerty’s surname is quite fitting for a local born and raised in Crested Butte where winters are long and deep. The Irish name “Fenerty” is derived from O’ fionnachta, which means “fair snow” in the old Celtic language. Anna traveled to Ireland in 2018 to explore a college, which she has yet to attend. “My gap year has extended,” she smiles. “Education is stupid expensive in the U.S. and education is such a privileged thing. I don’t see any reason to become thousands and thousands of dollars in debt when I have the access and the motivation to learn on my own,” she says. After touring the Irish college and speaking to others about it, Anna didn’t feel it was the right choice for her. However, she determined that Irish citizenship could be part of her trajectory. “It’s a country that reflects my own political and social values,” she explains.

Anna’s parents, locals Maria and Brian Fenerty, moved to CB in the 1980s and Anna came along in 1997. “I was a wild hippie kid for sure. There was a lot of barefoot running around in the woods and make believe. Being a kid here was amazing because you had freedom and mountains,” she says. “I remember having free reign of my imagination and not having to do anything except be a kid. It was a huge privilege.” Anna notes that she was raised without TV (and of course, no computers), so she wasn’t allowed to be bored, which she attributes to her ramped up imagination.

“When I talk to other CB kids, they always think they’re the last generation to be brought up as feral,” she laughs and notes that there’s safety in a small town community. “Everybody knows where those kids are and you know there are people looking out for them. I am the last generation who actually got to meet the old-timers, the mining families. I was lucky enough that mom worked at the museum when I was a little kid, so I got to interact with the old-timers.”

Anna didn’t particularly like being a teenager in CB. As an adolescent, conforming to norms was just not part of who she was. “You become more aware of social expectations,” she realized. “In elementary school during recess you were playing in the dirt and aspens. And then very quickly after that, you’d be chasing boys around and sitting in little circles of girls talking about nothing in particular. But you weren’t being crazy anymore.” It was a shift that she disliked. She graduated from CBCS in 2015, in a class of 12 girls and 20 boys and felt it was childhood’s end with town suddenly feeling too small.

Anna had spent her entire junior year in southern India, as a Rotary Club youth exchange student. In 11 months, she lived with three different families. “It was a city with 1.3 million people. I found a new appreciation for this valley, its beauty, mountains and quiet and was less annoyed by the small things,” she says. She suddenly felt lucky to have grown up here, but it also awakened the travel bug in her with the realization of how much one can learn from traveling.

She was still unsure of the need to attend college, but Anna wanted to study anthropology, and her interest was to understand history in the context of humans. “But,” she mused, “to spend all that money only to write history books no one would read?” Instead, she loaded up the car for a 10-month road trip, intending to hit every national park in the continental 48 states. Of the 47 national parks, she visited 41, spending at least three days in each. “I left Crested Butte with $300 and my Subaru, which got me to Vermont,” says Anna, where she worked odd jobs like clearing brush on private land so she could further finance her journey. “A lot of the people I stayed with had connections to CB and helped me along the way. I’d drive until I ran out of money and then worked a little to get more to continue.”

Afterwards, Anna said she had a choice. She could either start school or go take care of her aging grandparents whose health was failing. She chose to go spend more time with her grandparents. “What’s one more gap year in the course of your life?” she surmised. She headed west to Davis, California. “I’d be there for six weeks, go to Hawaii, then return for six weeks to take care of my grandparents, then drive around California and return for six weeks.” She was also a nanny in the Dominican Republic for a California family she had babysat for. “It was a sporic year. I spent a good chunk of time with my grandparents but then I’d leave with the travel bug.” Her grandfather passed in 2018 and her grandmother, who was in a nursing home, passed this year.

Anna’s brother, Cal, persuaded her to move back to Crested Butte in 2019. “And I realized how much I missed it and the mountains,” she says. Moving into her parents’ house, Anna worked the front desk at the Old Town Inn, where she had worked through high school. She also took a job in the kitchen at the Dogwood. This past winter she worked the Westwall front desk, Old Town Inn and was a babysitter, ”But only for local families.” She’s currently working the necessary three jobs to live in her paradise – at Alpengardener, the Daily Dose and Old Town Inn.

During the pandemic, she was able to move into Anthracite Place with the stimulus check she received, but, she says she still needs three jobs to keep afloat. Living at Anthracite Place she feels, “It’s a reasonable price to pay to live alone in CB but what I find unreasonable is that I can’t be a full-time student, that’s part of the lease. There’s also a cap on income so that I have to be careful of how much I make. If I wasn’t a seasonal worker, if I worked full-time year-round, I would no longer qualify to live at Anthracite. I don’t see how I can move on from here. I don’t know how I’m supposed to take a next step to be part of this community,” she says of the restrictive system and qualifying parameters which allow her, and others, to live in CB. “I appreciate it but not sure if it’s really helping me. I can’t grow financially at all and I can’t afford a place. You can’t even find a place. I work really hard. I can make money to pay rent, it’s more about finding a place to live.”

Beginning last summer when businesses partially reopened, Anna also noticed a change in attitude of visitors, which makes customer service even harder. “People are less understanding of inconveniences. I had worked in customer service at Old Town Inn since I was 16 and it seemed you had to ask people to wear their masks and they were not ok with that. The hot tub wasn’t open (because of COVID) and people weren’t able to accept the inconveniences. They weren’t as receptive to wait times.”

Anna decided to quit all her jobs, taking September and October to focus on more creative things, and started writing a screenplay. She’s also honing her creative poetry style and has started an open poetry night. “For one year now, I’ve been making space for creative culture through poetic expression. What started as a way to meet during the social distancing of last spring has become a weekly pseudo-speakeasy. A place for anyone to come, socialize, discuss and better themselves and our community through exposure to subjects and writers from afar and near. Anyone in the valley interested in doing more poetry should ask at the Daily Dose for more information.”

One of her dreams, along with her family’s, is to be able to have a piece of land here in the valley, “A place where my parents can grow old and enjoy themselves. Where we can grow food and be sustainable in a valley that doesn’t really allow for sustainability because everything is shipped in. A place where we can grow our assets and contribute back to this community that has raised us, from my parents to my siblings. After working three years and saving, we can put a downpayment on a downpayment,” she notes of the exorbitant real estate prices. “As the valley changes and more money comes in, it seems more unlikely because we’re being priced out of the community we want to live in. Affordable housing is the reason I’m still in this valley and there’s not enough of it anymore.” Anna recalls the time her parents won an affordable housing space for locals in the Red Lady Estate trailer park.

Getting more involved with local issues just may be in Anna’s future, and definitely in her scope. “You can complain all your life but if you’re not back here living, trying to make Crested Butte the place you want it to be, then you have no say in it. Not that those who had to leave weren’t justified in their complaints, but personally, I wouldn’t forgive myself if I didn’t at least try to keep Crested Butte the wild, crazy little town that raised me.”