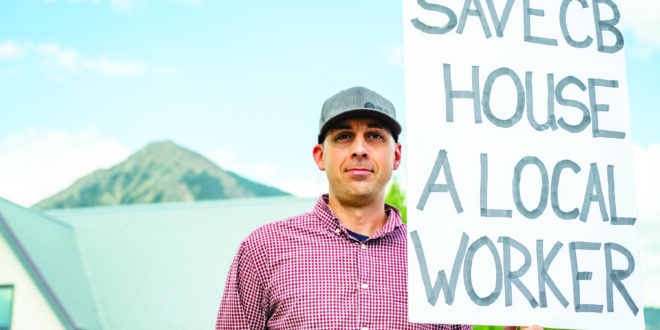 For Crying Out Loud

Ben Wright is at the Four-way Stop in Crested Butte for a little while every day, smiling, waving and holding a sign that reads, “Save CB, house a local worker.” It’s his attempt to educate passersby about the housing crisis and its consequential situation in town. He’s had a regular presence for about a month now. “I hope to help solve the housing crisis by trying to get people into housing and make the general public and second homeowners aware of the affordable housing fund they can donate money to.”

He gets a cacophony of honks and thumbs up. “Pretty much everybody is nodding their head looking at the sign,” he says. “It’s been a very positive experience.”

In his time at the corner, he’s had a lot of interaction with everyone from locals to tourists. “Every day I hear about people losing their homes,” says Ben; on average, he estimates at least one person a day. “I’m desperately holding that sign for the situation, for education and out of frustration as well. That’s why I’m out there.”

Ben was born and raised in Colorado, starting out in Fort Collins but moving to Carbondale at the age of three when his dad, Kevin, scored a job as district manager with the Division of Wildlife there. “As a kid, I was so lucky and privileged. Carbondale was a small town, similar to Gunnison, a safe community and we played on the street with all our friends.” His mom, Debi Saliman, was a nurse at Valley View Hospital. Ben and his sister, Laura, grew up in the forests and mountains around Marble, occasionally helping their dad feed and sometimes trap bighorn sheep for relocation. “They’ll relocate populations that are doing really well to areas where the populations are not doing as well,” he explains.

Throughout grade school, Ben played soccer and baseball and was on the varsity teams when he got to high school. When the snows came, he’d hit the slopes snowboarding. “If you were in the Carbondale school system, you got a season pass to Aspen for like $250. He graduated from Roaring Fork High School in 2003, and with his future a blank canvas, Ben didn’t quite know what he wanted to do, so he enrolled at Western State College (WSC) that fall.

“I grew up playing Gunnison in high school sports, so I drove over here a lot. I have to say, we did always beat them,” he laughs. He declared a business major with an emphasis on entrepreneurship and on a whim, he took a music theory class his freshman year. He tells that his dad listened to country while his mom listened to gospel, but Ben’s tastes were quite a different genre. “In high school, I got into heavy metal. Iron Maiden is one of my favorite bands.” Ben was asked to play drums his freshman year when all the WSC drummers graduated, leaving a void. “I had never touched a drum set in my life but I figured sure, I’ll give it a whirl.”

He attended a Dixieland band rehearsal, one of several jazz genres offered. “And the rest is history. Normally you have to audition, but they offered for me to be a music minor. It was really intense. I had to practice five hours a day because I had a lot of catching up to do to hang with everybody else.” But he had found his path. “That’s when I knew for sure what I wanted to do with my life. The professors at Western are amazing. They had the patience to take on a complete beginner.”

He played with both jazz bands in college, percussion in the symphony and the percussion ensemble. “You also have to be proficient in piano to be a music major,” he explains. Ben graduated in 2009 with a BA in business and stayed a couple years extra to earn a second BA in music. Afterward, Ben started teaching private piano and drum lessons.

His first garage band during college days was classic rock called Midnight Lightning. Ben joined a local Beatles tribute band called Dr. Robert when group member Kevin Reinert called. “I had never listened to the Beatles,” Ben confesses. “That was a whole other realm of music. I loved it.” Dr. Robert played more than 300 shows across Colorado from 2011 through 2017. “It was the most amazing experience of my life.” Ben also played with local groups Kung Pao, songstress Evelyn Roper and the Alpentones. His current endeavor with the much-loved local Grateful Dead tribute band, Easy Jim, started in the autumn of 2018. “We got the two drummers, two guitars, keys, bass and four-part vocal harmonies, which holds true to the music in trying to provide that big sound they had,” Ben says excitedly.

While in college, Ben worked at Interiors furniture store, where he met his future wife, Abby, in 2007. They started dating in 2009, and married on Mt. Crested Butte in 2014. “We were living in a garage apartment in Gunnison but working in CB,” he says. But in 2011, they fell into what Ben calls a sweet deal, caretaking a private “time shared” type home on the mountain. “We live downstairs in a one-bedroom apartment and the second homeowners stay upstairs when they visit, which is often since there are eight different owners,” he says of their living arrangement. He adds that he feels this could be a potential partial solution to the housing shortage if others could be persuaded to rent out existing auxiliary units specifically for caretakers.

Ben’s done that CB hustle for work, working a variety of jobs to keep afloat. Having graduated from WSC during the height of the recession, he noted that there wasn’t much work available, so on a suggestion from his mother, he started Wright Piano Service (wrightpianoservice.com). He took courses for tuning and repair certification through the American School of Piano Tuning, which took a little over a year to complete in 2012. “It’s a fun part-time gig. I’m working on one or two pianos a week. I’ve always had a steady job on top of the music,” he says of the multitude of day jobs that include wildlife trapping control, painting and roof shoveling.

Watching Crested Butte go down that path of losing community for lack of housing is triggering Ben’s frustration as he recalls the same changes of his childhood home in Carbondale. “I’ve been seeing this happen for 30 years. Everyone I grew up with can no longer afford a house there. They drive an hour and a half to work in Aspen. When I was growing up, Carbondale was a cowboy hippie town and the shift was beginning. People started getting pushed out in the ‘90s. They started moving to Glenwood Springs and now everyone’s had to move to Silt and Rifle.”

For his generation, graduating during the recession of 2009, it’s been rough. “It’s been pretty impossible to save money with the cost of living,” he notes that wages have always been low in this valley and typically with no benefits, plus having to pay for health and childcare. He feels that although wages are going up quickly recently to entice the scarce workers, “It’s not enough to buy a house in the valley. We’ve been saving up for a down payment but we have no chance because people are paying cash, and over the asking price,” he says of the new, moneyed people buying into the market. “The local workers have a sense of hopelessness right now because it’s become a reality that none of us will ever be able to own a free market home in this valley, it’s not realistic anymore.”

Ben feels that the area is always going to need more affordable units as the town grows. “In five years, Gunnison is going to be huge like Carbondale. Currently, there’s not going be anything to move into for at least two years. Town is saying that camping and living in your car is the only short-term solution available. There are 100 jobs in town, according to last week’s paper, and maybe two expensive places for rent, so the only option is to live in a tent or live in a car? I feel like the word ‘camping’ is a recreational activity where you go to enjoy the outdoors but if you’re working full-time jobs and your only option for a home is a tent or your car, in my opinion, we call that being homeless not camping. You’re making your workers live in third world conditions. If you have a job, you should be able to have a place to live with walls, a roof, running water and a bathroom. These people who are working and living in their cars are truly amazing to me, working two and three jobs, dealing with tourists and then returning to tents or cars. I have a lot of respect for them.”
“The housing crisis also ties into our mental health crisis in our valley, when people don’t have a stable place to live. Those of us who are fortunate enough to be living in a rental, we could lose our place at any time. The houses in our valley have turned into a commodity as opposed to a home and being part of the community. People are buying up property here just as an investment. For those of us who’ve invested our lives here, the odds are against us in buying a home. People are making money hand over fist on our backs and we’re all living paycheck to paycheck. A lot of my friends are having to leave,” but Ben emphasizes that they want to stay. “I grew up in these mountains. It’s hard for me to think of going anywhere else but we’re facing the fact that we might not be able to stay in the state I was born and grew up in.”

His plea is one echoed throughout the working local population, “If you’re a second homeowner and you have an auxiliary unit or any extra space, or if you’re building a home, consider building an auxiliary building for locals. If you’re working from home, consider housing a local. We now need to find a balance amongst all of these things. There are already some second homeowners renting to locals. That’s what I’m hoping for, that people see my sign at the Four-way and think about it.”