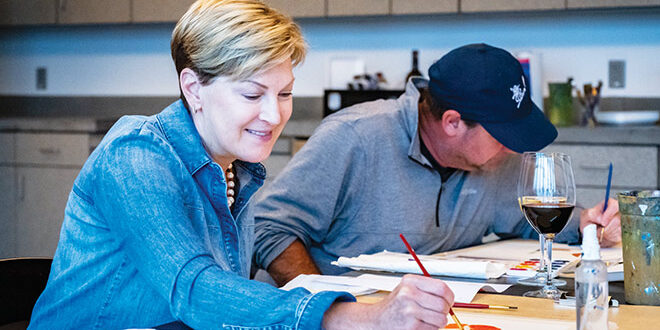 WATERCOLOR AND WINE: Each Thursday evening throughout the summer, local watercolor artist Karen Hill will be walking people through a step-by-step painting class with a little bit of wine thrown in. photo by Nolan Blunck

Emma Coburn Olympics update
Emma Coburn’s qualifying round for the women’s 3,000-meter steeplechase is on Saturday, July 31 starting at 6:30 p.m. MST and the finals are on Wednesday, August 4 and will be streaming live on Peacock starting at 5 a.m. MST. There may also be coverage of the women’s steeplechase on NBC, NBC Sports Network or The Olympic Channel.

Arts Fest in a new location
While this year’s CB Arts Festival won’t be front and center along Elk Avenue, there will be some top quality artists displaying and selling their work all weekend at the school. It is traditionally one of the prime summer weekends of the summer so don’t let the change in location (or small entry fee) scare you away. The festival opens Friday afternoon and runs through Sunday.

Rubber Duckie Race Sunday
The annual Rotary Rubber Duckie Race is scheduled for this weekend as well. The Olympic caliber ducks have been training for a year and are ready to display their finest athletic paddling prowess in Coal Creek. The race gets underway Sunday afternoon at 2 o’clock with the always exciting finish taking place at the Totem Pole Park bridge.

Happy Little Accidents – Bob Ross at the GAC Courtyard
Treat yourself to a night out on Tuesday, August 3 from 6-9 p.m. at the. GAC and come paint along to an episode of “The Joy of Painting.” This TV series introduced the world to Bob Ross, a soft-spoken artist with a nurturing disposition, who believed art was about more than skill but a means to finding mindfulness and a respect for nature. All levels welcome. “All you need is the desire to make beautiful things happen on canvas.” ~ Bob Ross. Contact the Gunnison Arts Center for more information and registration.

New ‘Sci-Thriller’ novel by former Crested Butte resident
Dr. Norman P. Johnson recently released a new novel, Sword of a Thousand Suns, an espionage thriller with a plot driven by deep knowledge of current, real-world theoretical physics. Mr. Johnson lived in Crested Butte from 1969 to 1980, so it’s no coincidence that the lead character of the novel lives in a cabin in Washington Gulch. Sword of a Thousand Suns is for readers who like science, mysteries, adventures and characters that are real people trying to discover the truth. The novel is available at all major online booksellers and on the Townie Books website.

Sundays @ 6 concert in Gunnison: Billy Jeter & The Shine Eye Band
Join us under the big trees of Legion Park on the corner of Tomichi Avenue and Teller Street on Sunday evenings from 6-8 p.m. for free live music and community family fun. This Sunday, August 1 at 6 p.m. features Billy Jeter & The Shine Eye Band. A son of the Delta, Billy Jeter’s music has been shaped by the folk rock and storytelling melodies of the 1960s and ‘70s.

What is your favorite insect/bug?