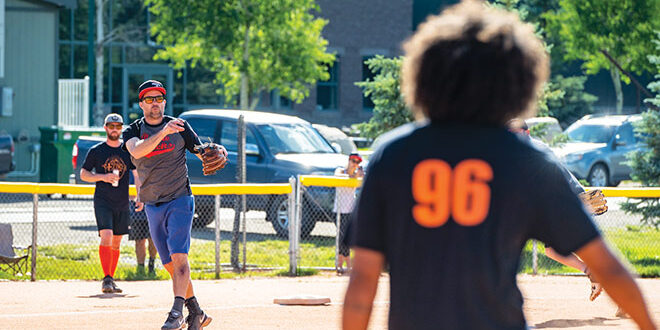 I ain’t gonna just throw out some stats because there’s more to this than meets the eye.
I eat my cheese with a fork.

Last night it was raining cats and dogs, but we’re still in a drought.

Facts and statistics aside though, Psycho Rocks eked out a 20-17 win over the Eldo earlier this season so I was hoping that maybe, just maybe, this one would be close too.

Boy was I wrong, but not entirely.

It was a beautiful evening at Tommy V Field with a few clouds hanging high in the sky and the grass fresh and green from the recent rains. The infield was prepared accordingly, meticulously raked with lines clean and white, almost reflective, and straight as an arrow down both baselines.

The teams warmed up, lightly tossing the ball as the sun beamed down with nary a wisp of wind while they each played their respective warm up soundtracks complete with lyrics regarding multiple acts of copulation, preferred styles of copulation and the occasional reference, or inference, of homicides committed or at least considered.

Ultimately, tactics won out and the goal was met but not without a fight.

The game got off to a rough start for the Eldo. Not only were they missing a fairly important player from the line up, but also they lost another important player two hitters into the game. Renée “Crash” Newton led off with a single and Nick Fulwiler followed with another base hit but when Newton stretched for third, she was tossed out and subsequently may have broken her ankle sliding into the bag leaving the Eldo down two key players at that point.

But they kept fighting and Patrick Cashion drove in a run with a base hit before the top of the first was over.

Psycho Rocks stepped to the plate to score three runs as Kyle Townsend led off with a double and then scored off a base hit from Ken “Warstic” Jenkins. A series of hits from Amanda Brack, Ben Hayes and Claire Bartholomew drove in two more runs and when Dakota Wiggins stroked a ball to deep left with two runners on base, it looked like things were starting to get a little ugly. But they didn’t because Eldo leftfielder Jess Ladwig got an incredible jump on the ball and chased it down for a reaching grab to end the inning and hold Psycho from going… psycho.

Ladwig’s effort fired the Eldo up for three more runs as Ashley “Smashley” Jackson connected for a double and scored on an inside the park home run (ITPHR) from Mark Krause and Ladwig, Robin Yost and Fulwiler all combined to push in another run to back on top 4-3.

Dayna Regan, Drew Grigsby and Ali Lieberman all capitalized on some confusion among the Eldo infield to load the bases and Eli Fiddler pushed them all home with a triple.

Krause cleared up some of the confusion with back-to-back stand out plays at shortstop for the Eldo but Brack got the Psycho Rocks bats going again with a two RBI double and Hayes capped it off turning a routine base hit into a two-run ITPHR for an 11-4 Psycho Rocks lead.

The efforts of Joey Reed and Cashion at the plate scored another Eldo run but Psycho Rocks tacked on three more runs when Fiddler cracked a three-run ITPHR deep to the corner in right field. Yet, when Cashion turned a reverse 6-3 double play with a spin to end the inning, things were still looking good for the Eldo despite the nine-run deficit.

Psycho Rocks added four more insurance runs over the next two innings just to make sure those in attendance knew who was really in charge but the Eldo went down swinging in the sixth and seventh innings to give them some hope, or at least something to talk about at the bar after the game.

Yost led off the sixth with a single and after Psycho Rocks turned a 5-3 double play, Cashion connected for a two-run ITPHR to cut into the Psycho Rocks lead. Their defense then shut down the Psycho bats in the bottom of the sixth inning and the Eldo mounted their comeback in the top of the seventh. Or at least their come closer.

Krause started it off with a solo ITPHR, Yost drove another line drive single and scored on a ITPHR from Fulwiler to cut Psycho’s lead double-digit lead to a single digit, but that single digit was still eight. Kristen Tyson doubled and scored on a double from Cashion to cut into it even more but it was too little too late as Psycho Rocks finished off the 18-11 win.
Did someone say Bonesaber?