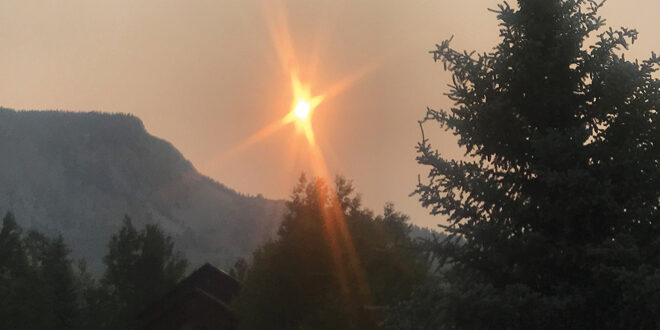 As I snapped a photo Monday of the orange morning sun that reminded me of a scene from an apocalypse film, I wondered if a dinosaur had done the same thing 65 million years ago shortly before heading into extinction. I don’t know why it’s not possible that a species that was able to live on the Earth for 165 million years compared to our measly six million years couldn’t have figured out their version of the iPhone and Britney Spears. I know humans have a superiority complex, but there is no evidence that a Stevejobosaurus didn’t take the dinosaurs to technological levels we are experiencing with humans today. No one really knows.

I do know that the climate is different than it was just a few years ago and most scientists credit the industrialization of the world and our greenhouse gas emissions for weirding out the climate. I read a scary story from longtime Colorado journalist Allen Best last weekend making the case that Colorado is on the path to start experiencing the so-called “megafires” that have haunted California for years. His story titled “There will be fire: Colorado arrives at the dawn of megafires” is on his Big Pivots website (bigpivots.com or read the story on our website under the ‘online extra’ tab). The combination of relentless drought, significant temperature increases, forest conditions all point us in the direction of having to live with gigantic forest fires and their impacts (smoke ‘em if you got ‘em) in our state.

The experts in Best’s story say wildfires will soon become much larger and more unpredictable. “What we’re seeing today in Colorado is very similar to what California was seeing in the early years of the 2000s, from 2003 to 2007,” says (Vail Fire Chief Mark) Novak. “I believe that in 10 to 15 years we will see the same type of fire that California was seeing in 2017, 2018 and 2020. I think that (East Troublesome) was just the first case of what we will see in the future.”

The story states, “that fires covered fewer than 100,00 acres during the decade of the 1970s. Just last year, 650,000 acres burned in Colorado… On the Western Slope, in places like Aspen and Vail, the fires have historically occurred every 120 to 250 years. Fires are natural. What we see now is not natural… A study published in 2020 in the journal Science concluded that climate change has made drought conditions 46 percent worse between 2000 and 2018… Now comes new evidence that high-elevation forests in Colorado since 2000 have burned at a rate greater than at any time in the past 2,000 years.”

Okay then. Being the humans we are, we have chosen to go from the opportunity to stop these types of climate impacts (which would have been a lot easier 20 years ago when we knew what was coming) to having to figure out how to live with the impacts. There is a town in Australia called Coober Pedy where I once bought an opal. Known not just for opals but also for the underground dwellings people live in because of the scorching heat, people live like comfortable moles. Underground, it is a consistent 75 degrees no matter the 100+ degree daytime temps. Is that Grand Junction’s future before going over the tipping point the dinosaurs must have crossed with, according to some theories, the “volcanic eruptions that caused large-scale climate change together with more gradual changes to Earth’s climate that happened over millions of years”? (Yeah I know there was likely an asteroid involved too.). But the question now is, how much do we have to apologize to our kids and grandchildren for making them live like moles? Apocalypse or new future reality?

The Crested Butte town council meeting agenda for next Monday shows a work session starting at 6 p.m. and a potential adjournment at midnight. Sign of the apocalypse or just a new normal? Unfortunately, it is the new normal.

It appears county officials are willing to reduce the maximum house size allowed in the valley without more intensive review and public comment. Is it a sign of the apocalypse that elected officials are acting like a bunch of hippie socialists or just good government? I’d say the latter.

It hasn’t happened yet but it might be a sign of the apocalypse if Mark Walter, who recently bought up a bunch of local commercial real estate, called me to chat so I could help him communicate his vision for a quickly changing town to a community on edge. I’ll keep asking, but so far, crickets. I know people are wondering and worried. He can always give me a ring at 349-0500 (extension 109). It’s understandably more important to deal with the Lakers and Dodgers but if Mark has a few seconds, it might go a long way in this little community…