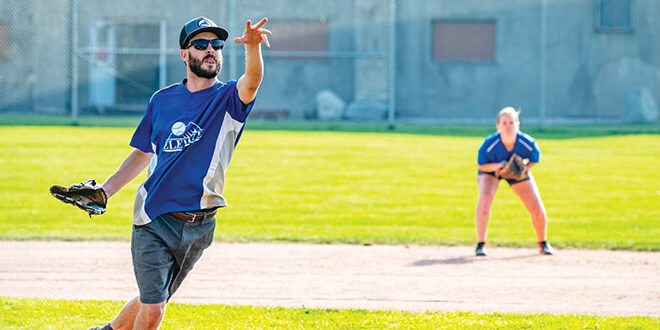 My work is done here

It has been an incredible journey for Elevate. When they joined the league seven or eight years ago, you could see there was something special about them. They had the core and just needed time to build around that core and actually keep playing. Well, they did both of those things and it finally paid off as they took down the Pitas Meatsticks, aka the Dynasty, 28-14 to win the 2021 softball league title finishing the season with a perfect 17-0 record. It’s a story arc I have been following since their inception and now that’s it’s done, so am I.

If I stop covering softball who will be there to tout the majesty and brilliance of race walking and team rhythmic gymnastics because that sh** is for real. Like really for real.

Speaking of really real, yes CJ Hoover, it’s not a dream, it’s really real. The hard work and dedication has paid off and you and your teammates are champions.

It’s been quite the run for Pitas, there’s no doubt about that. A five-year run to be exact. There’s a repeat, a three-peat, a four-peat and then a Meat-peat. And while teams like Psycho Rocks, Elevate and even the Avalanche back in 2018 threw everything they had at them over that stretch, the Meatsticks always found a way to prevail.

But not Tuesday night at Gothic Field, although it did look dubious at one crucial point in the game.

Offense scores runs but defense wins games and in the first couple of innings, Elevate had both starting with the work of Elevate first basewoman Hannah Crofut. In the top of the first inning Crofut robbed a base hit with a diving grab and then in the top of the second inning she did it again when Drew Stichter smashed a line drive at her head, unintentionally of course, and Crofut pulled it in more out of self preservation than anything else. Regardless, she made the play. Add in a leaping grab at the fence by Brent Chambers and the Meatsticks had mustered just four runs through the first two innings.

Meanwhile, Elevate’s bats turned from lukewarm to red-hot. After falling behind 4-0, Elevate tied it up off base hits from Kelly Jones and Sam Reaman and a three-run home run from Matt Savard. The bottom of the second inning is when they really caught fire to rack up 10 runs with everyone finding their swing. Two walks and a base hit loaded the bases to get things going and Elevate just kept on chooglin’. Reaman and Crofut connected for RBI base hits, Savard crushed his second three-run dinger of the night and Chambers and Hoover capped the 10-run attack with RBI base hits for a 14-4 Elevate lead.

The bottom of the fourth inning is when things started getting a little shaky. Sure, Savard hit another home run, as did Reaman, for an 18-4 lead but that meant they had capped out on their allotted home runs for the game and it was only the fourth inning. Meanwhile, Pitas had yet to hit a single home run. That is until the top of the fifth inning.

As the Meatsticks have done so many times before, they remained in the hunt and then started reeling their opponent in. Base hits from Roland Mason and Heather Duryea put two on for Stichter to drive home with a shot over the right field fence. Emily Crooks singled, Michael Villanueva slapped a RBI single up the middle and then Thomas McLean stepped up to crank a three-run home run of his own and all of a sudden the Meatsticks were within seven runs with two more innings to go. It was starting to play out like it had so many times before.

Except for one thing, Elevate wasn’t done and I tout the lead off single by Paige Rummery as one of the biggest hits of the game as it brought the Elevate bats back from the doldrums. Chambers followed with a double, Hoover smacked a two RBI triple off the fence, Jones added in sac hit RBI and when Savard, Liz Wigginton and Christian Allen all connected for RBI hits, Elevate had rebuilt a 13-run lead.

But you’re never safe from the Meatstick’s penchant for winning and they responded with three more runs in the top of the sixth inning just to keep everyone on edge.

Remarkably, Elevate remained laser-focused on a goal they set so many years ago. Chambers led off the bottom of the sixth inning with a double and when Hoover, Jones, Reaman and Savard all followed with RBI base hits, Elevate was out on top 28-14 and three outs away from the title.

Elevate ultimately sealed the deal as the Meatsticks managed just two hits and three fly outs to finish the game ending their reign, at least temporarily, and a new champion was crowned, and showered with beer.

And now I will turn my attention to the Walk of Shame because, just like Elevate, they got a quality core of players. They just need some time, about seven or eight years.