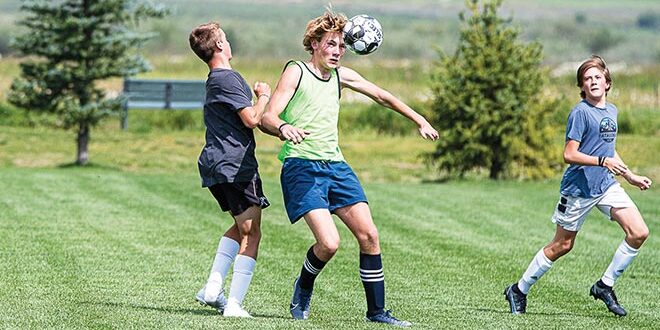 Volleyball, cross-country and soccer all set in motion

Last year was unique to say the least with the sports seasons curtailed and some sports moved to new parts of the school year to accommodate the COVID disruption. This year sports across the state look to get back to their regular scheduled programming with volleyball, cross-country and boys soccer all set in motion for a fall season and preseason workouts starting on Monday, August 9.
Furthermore, all three sports have their same coaches returning to the fold and consistency at the coaching positions is tantamount to a programs success so things are looking good for all three heading into the 2021 season.

Volleyball
The Titans volleyball season remained in their regular slot last year playing in the fall but the season was significantly shortened and, in the end, the Titans finished 2-12 overall. Fortunately, this past year there seems to be a renewed commitment to the program. Head coach Cierra Abbott returns for her third year and she and head girls basketball coach Amanda Reynolds joined forces to keep the players engaged and progressing in their respective sports as a lot of the athletes play volleyball in the fall and then basketball in the winter.

Reynolds and Abbott ran workouts twice a week that opened with volleyball, followed by some weight training and then finished with basketball. In the end, participation was decent and grew as the volleyball season drew near.

“I had my core group of four there with JV and swing players joining in fairly consistently,” says Abbott. “Towards the end of the summer I also had freshmen showing up.”

Now a week into the preseason Abbott has 27 players out for the team. It’s a good number leaving enough for varsity and JV but just a few players shy of creating a C team as well.

“It’s a pretty good number,” says Abbott. “We could run three teams but they’d be smaller teams so I will probably stick with a varsity and JV.”

Abbott has Ryli Mills-Thomas joining her as an assistant coach. Mills-Thomas grew up playing at a big Oklahoma high school as well as club volleyball.

The Titans look to build around their core of seniors Sami Lakoski, Hayes Freeman and Caroline Bryndal and two juniors Blakeley Reynolds and Ellie Duryea. In addition, Abbott is seeing a lot of talent at the younger ages to help push the upper classmen and the program with the potential to contribute at the varsity level.

“I’m looking to whoever has hustle, heart for the chance to play at that level,” says Abbott.

“If you don’t have ball control you can’t run your offense,” says Abbott.

They’re transitioning their workouts now to include court sense, specific skills such as blocking and getting the older players to help the younger players learn the rotations and their defense.

The Titans open the season at home when they host Creede on Thursday, August 19 at 5 p.m. in mighty Mt. Olympus. From then on, who knows, as the Titans play in one of the most competitive 2A leagues in the state. Making things tougher, the Titans are a noticeably smaller team. But with the returning core and the addition of some younger players looking to contribute, Abbott and the team do have a game strategy in place as well as one main goal in mind.

“We got to start early in games, serving hard and playing hard because we are a small team, I think our tallest player is 5’9”,” says Abbott. “Their big goal is to make it to the playoffs and, with a great core of girls, I do think it’s definitely within reach.”

Cross-country
Cross-country was the usual season last year but a far from normal season with meets limited and meet formats organized to accommodate social distancing with the competitions limited in number of participants and the typical mass starts altered to include smaller waves of runners.

The Titans did muster some success despite the erratic workings of the season with both Connor Williams and Ruby Pendy winning regionals and then placing third and 10th respectively at the 2A state championships.

This year the season returns back to its old ways with a full slate of meets for the Titans and mass start races. In addition, the Titans are fortunate to have Shari Sullivan-Marshall and Laura Puckett Daniels returning as co-head coaches and Vince Rodgers back as an assistant coach. It’ll be the fourth year the three have worked together with the cross-country team.

“It’s nice when you have continuity in your coaching team,” says Sullivan-Marshall.

The three coaches have nine boys and six girls out right now, including Williams and Pendy, as well as four-year Titan runners Sam Merck, Cormac Billick and Porter Washburn.

“We got two full teams which is great and we’re happy with the numbers but we will certainly welcome more if some want to run once school starts,” says Sullivan-Marshall.

The coaches have dedicated the preseason to working on team building and focusing on strength and stability for their athletes. It’s a “slow to grow” approach that they hope will bear fruit as the season progresses. They also have individualized workouts for the runners as some are coming in ahead of the game with their training while others are just starting to get their feet underneath them.

They do plan to take four to six runners to the Cheyenne Mountain Stampede in Colorado Springs on Friday, September 3. The meet is held on the same course as the state championships and is the only opportunity to get some time on the course all season long.

“It’s a great opportunity for the runners we think are ready for a 5-kilometer race three weeks into the season,” says Sullivan-Marshall. “They can get their first 5k of the season under their belt and get some familiarity with the course.

The team will then line up for their first meet on September 11 in Grand Junction and then maintain a consistent race schedule throughout the season with some big goals in mind.

“We need to talk to our kids about it but we think both teams have a chance to qualify for state,” says Sullivan-Marshall. “It’ll be fun to see how the season shakes out.”

Soccer
Expectations were somewhat muted going into the COVID soccer season last spring. First of all, boy’s soccer is typically played in the fall so the change in season brought questions for programs across the state. Additionally, the Titans were a young team with just three seniors, a couple of juniors and a gang load of sophomores vying for varsity spots. In the end, the team rallied to win their second 2A state title in the past three years and now have a whole new challenge ahead of them in the 2021 season.

“There is definitely added pressure on us,” says coach Bob Piccaro. “One, to repeat, and two, we have a target on our back.”

The Titans do have a number of players returning from the team last year but there are some holes to fill and players will be asked to step into key roles.

“We have a lot of returning talent and skill, now we have to develop the younger players as we’re a little thin on the freshmen and sophomore side and some inexperience in goal at the varsity level that will need to be worked on,” says Piccaro.

They opened their preseason workouts with a variety of areas that need work but the main focus is on one area in particular.

They got their first test on Saturday, August 14 when they headed to Grand Junction for a couple of scrimmages. They closed the day with two ties and, while the younger players did have strong showings, the team as a whole was a bit out of sorts.

“We definitely looked rusty, no movement off the ball and we still need better defense,” says Piccaro.

The Titans open the season on the road when they head to Basalt on Friday, August 20 and then stay there to face Aspen the next day. Their first home game of the season is on Tuesday, August 31 when they host a new opponent out of Colorado Springs, St. Mary’s.

While the ultimate goal is to repeat as champions, there’s a lot that can happen between now and the end of the season and the Titans have much to work on before they even consider the post season.