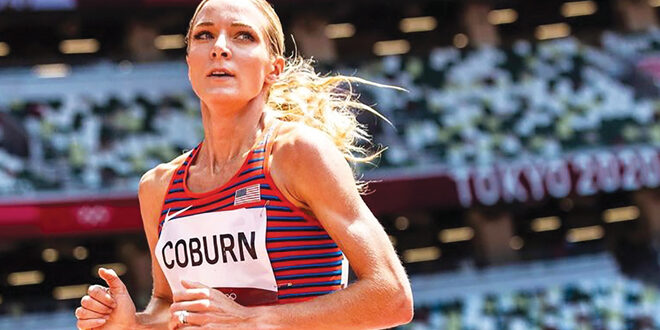 “All of a sudden, my body stopped moving forward”

Expectations were high as Emma Coburn headed into the Olympic Games in Tokyo. She had established herself as one of the top 3,000-meter steeplers in the world racking up a bronze medal at the 2016 Olympic Games in Rio as well as a gold and silver medal in the last two track and field world championships, events equal in caliber to the Olympic Games just without the massive pomp and circumstance.

Coburn had her sights set on bringing back another Olympic medal but, in the end, things didn’t work out as expected. She now returns to the Diamond League pro race circuit and looks forward to seeing everyone at the Elk Run 5k on September 25. She answered a few questions for the Crested Butte News:

Were you happy with your prelim race?

I was happy with the prelim race, it was one of the fastest times I’ve run in a prelim before and the goal was to just finish in the top 3, which I did. It was really hot and humid so I didn’t want to overdo it and let the top two girls go the last 600 meters and ran a little easier at the end.

What did you do the days between prelims and the final?

We had two days rest, so one day was a 45 minute easy run and the other day was 25 minutes of running with some sprints. Then lots of naps, massage, hydrating, and rest.

How was preparation the day of the race?

All the preparation for the race was great. I came into Tokyo feeling very fit and ready. On the day of the race, I went through my usual race day routine. Sleep in, relax, eat, nap, eat more, then head to the track.

Was there a unique sense of urgency or expectations going into the race?

I am used to running under pressure, as I’ve been the top US steeplechaser for 10 years and one of the top in the world for the last 7 years. So I’m used to the pressure and expectation at major championships. I find focus and peace in the moment, actually.

What was happening the first couple of laps?

My plan was to stay in the pack early on and relax, then the last few laps, make a move to the front. So the early laps went according to plan.

I’m unsure what happened. All of a sudden, my body stopped moving forward. It wasn’t like my lungs were burning or my legs were burning, it was like a full loss of power. I did everything I could to make my body cooperate, and it wasn’t working. My initial thoughts are that the conditions in Tokyo took a toll on me and the last two laps were a reflection of that depletion. The only other time I have felt that way was when I raced in a humid race in Austin, TX. Growing up in CB was a wonderful time, but it didn’t prepare me for racing in 80% humidity.

How would you characterize the Olympic experience as a whole?

In general, I am so proud that I am a three time Olympian. I will look back at this point in my career and have pride in the fact that I won the Olympic Trials and that I was in Tokyo. But right now, my Olympic experience in Tokyo isn’t a rosy memory. COVID restrictions, weather, training were all difficult. But in the end, I am proud that I was able to stand on the starting line at the Olympics representing USA.

What is next for you?

Thank you to everyone in town who was so supportive. It warms my heart knowing I have your support in victory and defeat. Thank you! And I look forward to seeing you all at Elk Run 5k on September 25th. Sign up at ElkRun5k.com.