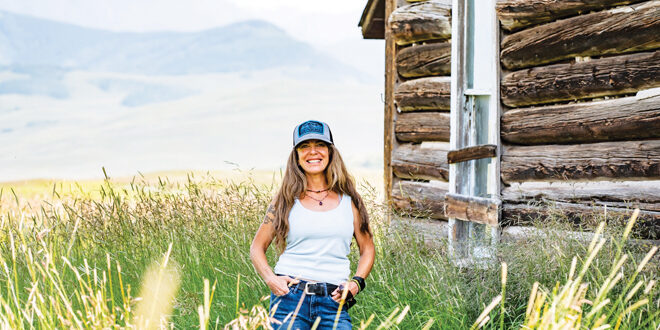 M’Lissa Story’s mom felt that “Mel” was a truck driver’s name and “Missy” was too prissy, so she crunched it with an apostrophe and made it as unique as her daughter. “It’s on my birth certificate. It’s always been a conversation piece. Oftentimes people will question the name and it gives me an opportunity to have conversations that I wouldn’t typically have had,” she says.

Although she lived in the Los Angeles area, her childhood memories are of being outdoors and in the mountains. “We had a tiny, old, beat up cabin in Mammoth, so I grew up skiing there. My parents would take me out of school and we’d drive up. I’m so grateful that my parents were outdoors oriented,” she says. “They introduced me to enjoying those wild places at a very young age. It really set me on a trajectory of having my own personal relationship with being outdoors and the mountains.”

M’Lissa left California right after high school to attend Arizona State University as a fine arts major, graduating with a Bachelor of Fine Arts. “I was under the influence of the American dream – that illusion about graduating with a degree, getting a corporate job, buying a house with the white picket fence,” she admits, but that dream was also an internal conflict for her on many levels. She went to work for an ad agency, however, she realized her folly half a year into the corporate job. “Even though I was doing art and the thing I loved, it was a sterile environment and that was limiting,” she explains. “There were restrictions and it wasn’t the work environment that I wanted to be in and when you’re in your early twenties, you’re still trying to find your way.”

Her college roommate had moved to Vail and invited M’Lissa to join her. She had visited Colorado as kid and in high school on family ski trips, “Steamboat, Vail, Copper, and Crested Butte. I definitely connected with the mountains.”

M’Lissa headed out and found work as a ski instructor. “I loved it but I was working three jobs,” she says, with her additional employment at a Benetton clothing store and also waiting tables at the Vail Country Club.

As much as she loved the mountains, she always had an urge to do something quite different, “I had a burning desire to go to the East Coast because I wanted to know how the other half lives.” She moved to Manhattan with two duffle bags, no place to stay, and no job, “So, without any of the typical fundamental things you move for,” she laughs. After a bit of couch surfing, she moved in with a friend on the upper west side. Her friends would tease her about her Colorado ways of making eye contact, being too friendly and her inability to hail a cab. “You need to get bold and that was the beauty of my experience there. Back then, New York City had such a blunt straight forwardness, a candor, but there was also an odd beauty in that. There was an authenticity,” she feels.

She was doing temp work and became a financial assistant for Smith Barney. “I was working for three stockbrokers during the day and at night I was cold calling for qualified leads. They buy these lists of people to pitch the latest and greatest stocks.” Part of the experience for M’Lissa was the NYC culture, enjoying Broadway, off-off broadway, the museums and even the New Jersey shores and all the diverse cuisine that “the city that never sleeps” has to offer. Manhattan is notoriously expensive however, and her rent alone consumed three-quarters of her paycheck. She was sharing a one bedroom apartment. “We had twin beds. I loved it but I went to Central Park every day for my nature fix that I needed desperately. It started to wear on me.”

M’Lissa went back to the west coast, Orange  County, and got a job as the east coast sales manager for Powder Magazine, part of Surfer Publications. She covered all of the east coast and the state of Colorado. Two years later, she created her own business, Summit Sports Marketing, and did marketing and public relations in the outdoor industry. Some of her clients included Kelty, Ibex Wool clothing, Boreal climbing shoes and Bombshell, a women’s snowboard clothing company. “It was before the days of social media, so it was old school press releases and interacting with all the journalists to promote the products and get them into the different magazines.”

She worked her company for 15 years, during which time she got engaged to a Powder Magazine co-worker, then moved to Telluride and got married. “We traveled the mountain resorts and we got free ski passes.”

They decided to move instead of traveling to all the places and mountains they loved, “It was between Crested Butte and Telluride. It was a difficult decision, but we settled in Telluride.” A decade later, she moved solo to Durango, but never felt connected to the town. “It was too big, it was a big city to me.”

She stayed long enough to go back to school to get her masters in Ecological Economics through Prescott College in Arizona, which had a low residency program. “It allowed me to study what I wanted and design my own curriculum. The impetus was, I wanted to get to the root of why is it that everything I love is being destroyed.” And she feels she got her answer, “It’s for money. Why are the forests being clearcut? Why are the oceans being polluted? Why is there not holistic growth instead of urban sprawl? Unfortunately, we have one measuring stick and that’s money.”

She moved to Crested Butte in the autumn of 2016 after a long-time friend offered an extra room. Two months later, she found a studio just out of town. M’Lissa was freelancing in communications while working on a big project and then was hired by KBUT as events manager. “I love community radio. I wanted to immerse myself and get involved in the community.” She was also a server at the Sunflower.

Somewhere along the line, M’Lissa decided to start up another company. “I got this wild hair that I wanted to start an organic cold press juice company,” which she named High Lift Juicery, and featured her unpasteurized juices at the Sunday farmers’ markets as well as Mountain Earth and Scouts General Store. “I worked so much but I could barely pay my rent, so after two years, I let go of the idea because I truly could not make enough juice to make a living.” M’Lissa returned to her roots in communications, marketing, PR, social media, websites, and content creation. She’s had such great success that all her business is word of mouth. “I’ve never been busier,” she says. However, her housing situation changed and M’Lissa now needs to find a place to live.

“It’s so unsettling to not have a place of my own. I’m constantly in survival mode,” she says, and is currently couch surfing at a friend’s house with her two dogs. “I have been looking for a place to live since March. The landscape for rentals has changed so drastically that people don’t even list their places. Housing is so tight now, it’s all word of mouth and people are securing places three months in advance, if they’re lucky.” Back in June, she looked at a one bedroom rental for $2,800 per month, “I can’t afford that but at least it was pet friendly.”

M’Lissa considers some of the reasons for town’s issues. “People are coming to this funky, close knit community to escape the ills of society but then they bring those ills with them. I lived in Telluride in the mid ‘90s for over a decade. I like tattered curbs. I don’t like round abouts. Everything’s polished, manicured and everything has to be within a kind of rule or regulation. To me, that’s not how humans want to live. Sadly, I see this happening in CB. It hits hard. I truly thought I’d be in Telluride my entire life. I was incredibly active, on ten different nonprofit boards. I organized educational workshops about green building, organic, local food. This was a natural springboard to start the Telluride farmers market. I was hugely involved as a community activist. The idea is, we’re in this together, we can evolve with the change, being proactive and doing it mindfully instead of retroactively. If you’re only using one measuring stick, the bottom line is, things start to get distorted. Are we saving open space or selling it?”

Underneath her rant she confesses her fear of losing the community that she knows and loves. “There’s a reason that I love this place and weather the storm.” She hopes to someday be able to buy into affordable housing. Community is what keeps her here. She was also on the Creative District board, volunteers at local events when she can and last fall started volunteering with the CB Search and Rescue.

“Relationships are a vital part of the health of the community. Community is not separate, it’s cultivated through taking care of each other. To be in community is to be personal. It’s not all about the money. I feel like I’m one of the wealthiest people because of my friends.” But she asks the question on most locals’ minds, “How do we preserve the character and funkiness of the community we love? How do we save that?”