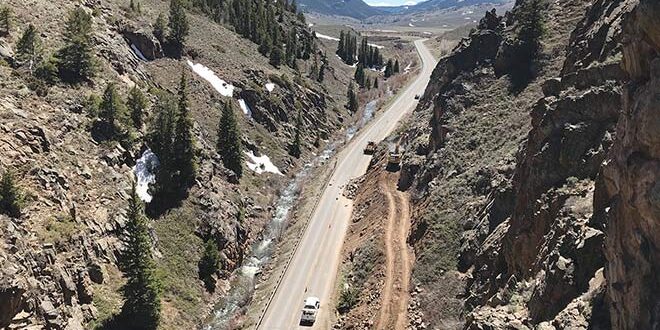 Mudslides and flash flooding on Interstate 70 near Glenwood Springs has lead to some changes on roadway construction and scheduled closures along Highway 50 within Little Blue Creek Canyon between Gunnison and Montrose. Officials cannot yet confirm how long those changes will be in effect but it appears it could be weeks, and in the meantime the canyon will remain open “until further notice,” according to the project’s public information team.

I-70 near Glenwood Springs has been closed for several days after extensive flash floods and mudslides damaged the roadway, and governor Jared Polis has declared a disaster for the area, saying it may be closed for weeks. Highway 50 will provide a detour that accesses Montrose and Grand Junction.

During the Tuesday, August 3 Gunnison County commissioner meeting, public works director Marlene Crosby predicted that Highway 50 will remain open until the extensive road damage to I-70 is resolved.

The indefinite opening will slow the ongoing construction on Highway 50, where efforts to widen the roadway and shoulders and make other safety improvements have caused scheduled closures all summer. A spokesperson for the Little Blue Creek Canyon project, Mavis Fitzgerald, confirmed on Wednesday that, “US 50 (project area) will remain open until further notice,” but could not provide any estimated timelines. She said construction would continue within Little Blue Creek Canyon.

“Construction is not halted, we are required to have two-way traffic, at this point. It’s not indefinitely, just until further notice,” she said.