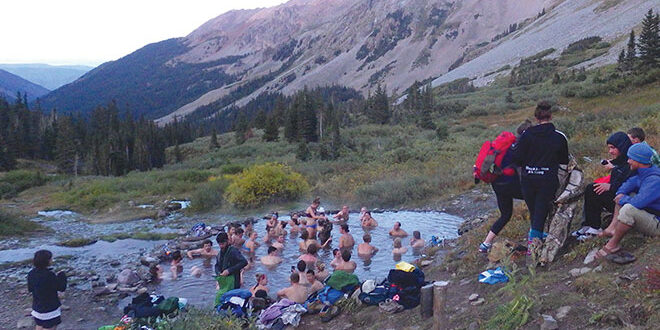 Backpacking along Conundrum Creek, West Maroon trail and around several other areas of the Maroon Bells-Snowmass Wilderness (MBSW) area might come with a fee and required permit for overnight visitors starting in the spring of 2022. The White River National Forest is taking public comment on a proposed set of overnight user fees for its most popular backpacking areas and designated campsites, and Aspen-Sopris district ranger Kevin Warner gave Gunnison County commissioners a presentation on Tuesday, August 24 on the proposal.

The overnight fee proposal includes a $12 per person fee for overnight use in specific areas of the MBSW from May 1 through October 31, and an additional $6 year-round online permit fee. These fee and permit areas would include Conundrum Hot Springs; the Four Pass Loop area including Crater Lake, Snowmass Lake, the east fork trail of West Maroon and all the connecting trails in the four pass area; Geneva Lake and Capitol Lake. Day use would not require permitting or a user fee.

Warner explained that the reasoning behind a permitting and fee structure is that the nearby resort communities have attracted a lot of visitors looking for backcountry experiences over the years, both tourists and locals alike. The White River National Forest has been hearing from people asking them to better manage these areas regarding human waste, resource damage, trail maintenance and crowding. Warner shared several photos of large, unruly tent groups overtaking smaller designated camping areas, removing trees to create more room and impacting the overall user experience.

The revenue from the user fees would be used for restoration, additional ranger field and visitor center presence, trail maintenance and improving user experience.

Warner said the need for restoration is extensive, with several football-sized areas of denuded bare soil, damaged vegetation and fire scars. “Now we can come in and start to rehab some of those areas,” he said.

The fees would also enable the Forest Service to provide more wilderness ranger field presence to monitor trails and also to provide visitor information services. “We would be able to have seven days a week coverage throughout the backpacking season if this were to go through,” said Warner.

He said making trail improvements would also entail better maintaining and clearing areas for access to permitted camping areas, and the visitor experience would be improved through reduced crowding and conflict, as well as the assurance of an opportunity to visit through the online permit system.

Warner said the fees would also help the Forest Service purchase and provide wag bags to users at the trailheads. Aspen has been providing wag bags to users for about a decade to help manage the human waste factor, “and they getting tired of it, to be honest,” he said.

The Forest Service would also be able to provide additional and replacement bear-proof canisters for food.

Warner said the existing camping permit system at Conundrum Hot Springs has been successful in spreading the same number of users out over different days of the week and throughout the season, instead of former times when as many as 200 people were camping there at once.

“We’re still seeing the same numbers of people able to access the area,” he said.

As far as crowding, Warner said while the other areas proposed under the new system are over-crowded already, Geneva Lake is on the cusp of need. But there is concern that if it were left unpermitted, it would be overrun after other areas became permitted.

Approximately 75 percent of the Maroon Bells-Snowmass Wilderness will not require a permit and fee, although Warner pointed out that the Forest Service is aware there could be unintended effects and it will adapt to future needs if other areas are impacted heavily by the new system.

Commissioners responded with some questions, namely how long-term changes might look in the area and specifically within the Gunnison County boundaries.

Warner said in general it would limit the spikes, but not the overall number of users currently out there. There is a limit on how many people can get a permit in one of these areas on any given night, he said.

County commissioner chairperson Jonathan Houck asked how the East Fork trailhead of West Maroon would play in to this, and Warner said he planned to visit that trailhead on Wednesday to meet with Grand Mesa Uncompahgre and Gunnison National Forest district ranger Matt McCombs.

“It’s on our radar; we’re working on it. And I think we can anticipate those improvements we are talking about would be applied across the board,” said Warner.

The new system would begin around May 1, 2022 and the user fee would remain in effect through the end of October. The $6 permit fee would be collected year-round.

The Forest Service began accepting public comments and feedback in July and will continue to do so through September 15. “We are trying to get all input in by the middle of September,” said Warner, and the Forest Service has received 200-plus comments so far. All comments are available to the public.

More information about the proposal and how to comment is available at https://www.fs.usda.gov/whiteriver