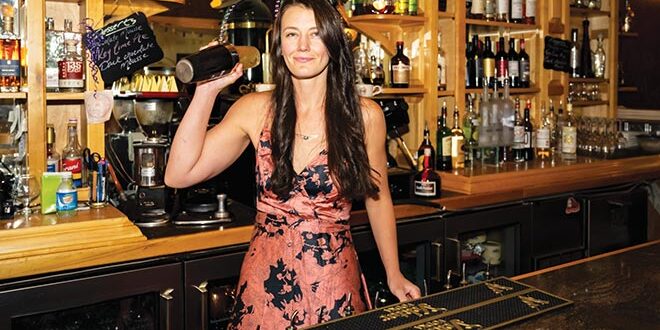 Sydney Boling grew up in the college town of Fort Collins as a middle child to a Colorado hippie-mom school teacher and a Texas cowboy-dad in construction. She tells that it was an amazing place to be raised with the many things to do and she participated in year-round sports growing up – softball, volleyball, swimming and then rugby during high school. “But my favorite thing was hanging out with my black lab. We hung out in the mud together,” she smiles. “Fort Collins still had kind of a country feel back then,” but, she laments, “It’s gotten a lot bigger now. It’s why I left. You couldn’t see the stars anymore because the light pollution got so bad.”

Sydney was only able to snowboard about 10 times a year because it was a six-hour round trip commitment to Front Range resorts on winter roads. As an exchange student in Bordeaux, France, during the summer of her junior year, she began to realize the benefits of traveling. During her sweet 16 birthday year, Sydney’s father took her to Amsterdam, which completely triggered her wanderlust. “You learn something new every day when you’re traveling. When you’re somewhere new, everyday mundane things seem more exciting.”
She graduated from high school a year early, in 2007. “I was in a hurry for no reason,” she laughs, and she then realized that, “None of my friends could hang out because they were still in school.” To remedy this, Sydney enrolled in massage school at the Healing Arts Institute. “I liked the idea of it because you could go to school barefoot,” she says somewhat jokingly, and earned her CMT (certified massage therapist) in 2008. She then attended Front Range Community College for biochemistry. “I wanted to brew beer because that was taking off at the time,” however, she refocused on agricultural application for fertilizer and transferred to Colorado State University (CSU). She had been in school for four and a half years with a solid math and science curriculum, footing her entire tuition by herself, so when she was told most of her credits transferred only as electives, she understandably lost motivation. “I decided to go traveling more,” she resolved, and set out to satisfy her wanderlust.

In 2012, Sydney was slinging sake in a Fort Collins sushi restaurant. “I’d work a couple months to make enough money to travel, spend all my money overseas until I completely ran out, and then come back home and work. And that’s why Crested Butte suits me, because you don’t get penalized for leaving to travel,” she says of the advantages of having an off-season. Her first post-college journey was an eight-month excursion that included traveling through England, France, Amsterdam and Cyprus, the latter is where she found work to carry on with her adventures. “I worked at a cafe as a food runner because no one could understand English,” she explains why she couldn’t be a waitress. “It was interesting because everyone thought I was a prostitute since I was so pale and tall, so they thought I was one of the Russian prostitutes who would come there for work,” she laughs. “The first Greek I learned was, ‘Leave me alone, go away.’” She wisely befriended a couple of bouncers who took her under their wings, “They were my bodyguards.”

Sydney’s first jaunt to Asia was in 2014 where she explored Japan and South Korea before heading to southwest Asia to hit Thailand, Cambodia and then Malaysia, where she became certified to dive. “That’s when I realized that diving is what I wanted to do, and to become an instructor someday.” This past spring, she became dive master certified in Koh Tao in the Gulf of Thailand.

When COVID shut down tourism and made its future uncertain, it scuttled Sydney’s concept for a conservation project as her investors pulled out, so she’s currently seeking new investors for that same project. “It’s hard to get people interested in a travel idea when tourism and travel is shut down,” she says, but still plans to pursue this dream. She’s got her sight set on creating a marine park to preserve coral in the Philippines. “I had the privilege going there four years ago. We were on a boat with no mooring lines so they kept throwing their anchors into the coral, which destroyed it. Coral takes 50 years to grow so without education, they’re destroying their tourism,” she says.

She explains that many tourists come exclusively to take the boat tours to the coral reefs. She chose the Philippines since that country is seeing more diving tourism and tourism in general. Sydney wisely plans to get in on the ground floor of that industry.
Right after the Philippines, Sydney visited the Rosario Islands to check out the coral reefs, off the coast of Cartagena, Columbia, South America. “I got there and it was just a bunch of dead coral and not the beautiful reef they described. I’m sure it was there 10 years ago but it wasn’t there anymore. It was depressing. Coral has to be a specific temperature and PH and too much silt will smother it, so construction right off the shore can suffocate a reef.”

Sydney’s dream is to open a dive shop that promotes responsible tourism, “And enables the local community to make money while preserving their home.” She feels that educating the locals is imperative, “And installing mooring lines so boats don’t drop anchor and destroy the environment.” She says her project will have a focus on conservation. “If I can get more marine biologists in intern programs, that would be best because those are the people I’m excited to work with. There are programs called ‘coral watch’ where you dive with the general public — laymen or tourists — and have them help gather data, such as writing down the color of coral which will track its health and vitality.”

Sydney plans on getting dive instructor certified this October in the Gili Islands, in Indonesia, which will allow her to also teach conservation programs as well as certify others as open water divers. “It’s a shark conservation group,” she tells of the organization where she’ll get her instructor certification and further explains, “Basically, they incorporate people into their research projects (while training them for the instructor certification). Sharks in Indonesia are the most hunted anywhere in the world. I’ve learned the dive aspect of it and now I’m learning the business aspect to be able to operate a dive shop with a focus on conservation.”

Her concept is to build accommodations for people to stay and have the dive shop be a part of that. Her goal is to find a pretty reef to guard and then build some bungalows, “I just want to garden coral,” she grins.

For now, Crested Butte is a perfect place for Sydney, having arrived for Vinotok celebrations just three years ago. “I was invited to Vinotok by a boy who then ditched me, and I went from house party to house party on a skateboard. Then everyone invited me back to live here. During the subsequent six times she visited, Sydney met more people. “By the time I moved here on June 3, 2018, I had a great network of friends. I had wanted to leave the town I was born in because, again, I couldn’t see the stars and there was nowhere to dance.”

Once moving here, Sydney did the usual job shuffle until she landed at the Princess Wine Bar in September. “I love it here, they’re good to me.” She also feels fortunate in her housing situation. ”Although I was homeless for a short span, I was invited to live in Skyland with a friend and it’s a beautiful place for my dog, Lexi,” she says of her 11-year-old blue tick healer she’s had since a puppy. “I leave her with a friend when I travel,” she assures.

Even though she’s an avid traveler, Sydney does feel that CB is home. “It’s about the people and I feel at home. So many people here are well traveled and interesting and they’re excited for your travel adventures as well. The people of CB are flavorful. I enjoy the off-seasons because they let me pursue my ambitions, so Crested Butte fits me like a glove.”

Share
Previous Clock is ticking on Country Meadows and commissioners are frustrated
Next Benchtalk: August 20, 2021