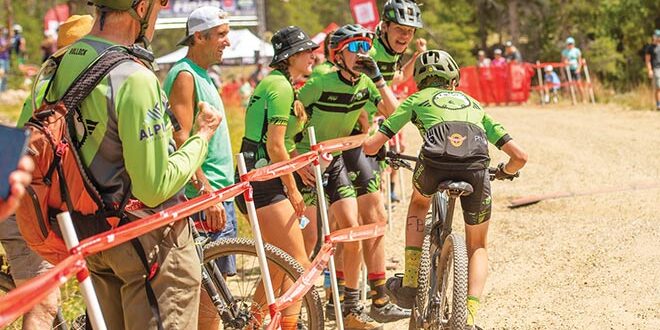 The CB Devo high school mountain bike racing team is back at race pace having had their first race of the 2021 season last weekend in Leadville with Finn Veit and Lance Lakoski leading the charge by winning their respective race classes.

It had been quite a while for Colorado high school mountain bike racers since their last race. The sport opted to suspend the usual spate of races last year due to COVID and used a “virtual” race style instead.

“They came up with virtual challenges that teams and their riders could do, trying to keep the kids engaged,” explains coach Jenny Smith. “It was neither negative or positive, it was just challenging. But I think we all grew from it.”

Smith and her coaching staff, including newcomer Levi Southerton and returning coach Geo Bullock, brought the team back together in April to discuss changes to their program and decided to have their riders do something a little different over the summer rather than pure training for the upcoming high school race season.

“We wanted to focus on the growth of the kids, racing is not the end all, be all,” says Smith.

“It was a bit different and it bonded the team more,” adds captain Conner Knight. “It was sweet.”

As a result, they dedicated days to more adventure rides than training over the summer and then made the transition to the high school race season at the start of August.

“It was super fun and I think it worked really well,” says Smith.

“The summer was good and it was good to switch from adventure rides and start training,” says captain Katie O’Neill.

Still, while in race season now, they have not abandoned their efforts to include more than just training to their time with bikes. In addition to race prep, the team also dedicates one day a week to bike maintenance, yoga and whatever else the team captains may have in mind.

“We want them to grow as riders and learn to be active members of a team and not just focus on racing,” explains Smith. “Strike a balance.”

Part of that balance does include races and the 11 members of the team made the trip to the Cloud City Challenge race in Leadville on Saturday and Sunday, August 28-29. With Colorado high school mountain bike racing finally returning to near normal, the first race was adjusted accordingly with a new format. Rather than the usual mass start, organizers decided to do a series of time trials with four racers on course at a time. And from the looks of things the new approach to the CB Devo high school bike team seems to be working on the racing front as well.

“We only had four of the 11 riders that had raced in a high school race before,” says Smith. “They all did amazing.”

“I had a lot of fun, cheering everyone on, we are the loudest team by far,” says Piper. “I think we race a lot better than we train. We train well but we do so much better racing.”

The team now has a full month off until their next race in Snowmass on September 25-26. They plan to take this first week easy and then will start to ramp up their efforts to prepare for the Snowmass event.

“We typically do well there,” says Smith.

Share
Previous Legals: September 3, 2021
Next Volleyball wins one of three in opening week