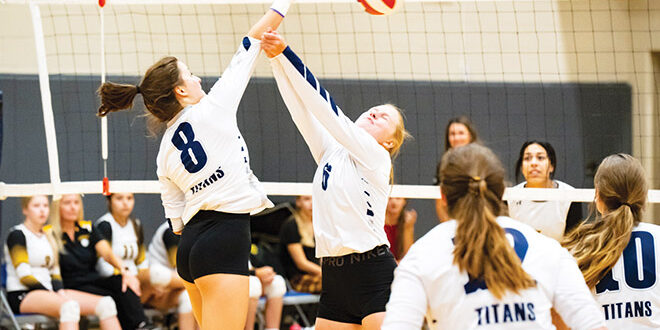 Volleyball wins one of three in opening week

“It shows the resiliency this team has”

Injuries and illnesses have the Crested Butte Titans volleyball team scrambling but they remain all in no matter what they are asked to do and opened the season winning one of three matches this past week.

The Titans started the season off with one of the toughest opponents from the Southern Peaks league, the Sargent Farmers on Tuesday, August 24.

“They’re usually one of the top teams in our league,” says head coach Cierra Abbott. “I feel like we were as ready as we could be. We had to use a different rotation than normal but we adapted really well.”

After struggling through the first two sets and losing both, the Titans put together a much-improved game in the third set. Despite losing that as well, and the match, there were plenty of positives to take from the first match.

“We came out in the third and gave them a run for their money,” says Abbott. “I don’t think they were expecting that. Win or lose, it was a good indicator of how the season will go.”

“We definitely had a strong serving game overall and I think our serving helped a lot,” says Abbott.

The Titans returned to action for two matches on Saturday, August 28 against Caprock and Ridgway. Once again, the team was forced to adjust their rotation to accommodate the loss of players and they opened against Caprock a bit disheveled. But after struggling initially and losing the first set 25-18, the Titans found their feet and started to set the tone for the match to win the next three sets and take the match.

“It took the first 10 points of the first set to get our feet under us,” says Abbott. “Then we stayed heavy on the pedal. We cut runs off and got runs of our own.”

“Our passing and digging was probably the most controlled I’ve seen, last season and this,” says Abbott. “Serve receive and defense really helped us get more swings and stay in our system.”

Fatigue and injuries continued to set in on the Titans throughout that initial match though and, once again, the Titans had a completely new line up when they took to the floor later that day against Ridgway.

“We haven’t played two games with the same rotation,” says Abbott. “I was running a little understaffed and had players in all new positions.”

While rotations were mixed and players were asked to play in new positions than what they’re used to, the Titans did not use it as an excuse to fold no matter what the score was throughout the match. They ended up dropping the match to Ridgway in straight sets, but Abbott saw her team continue to press on no matter what the obstacle.

“They wanted to play on,” says Abbott. “We had a lot of things change and they had to do things they’ve never done before, but they never gave up which was great to see. It shows the resiliency this team has.”

The Titans have a tournament in Gunnison on Saturday, September 4 and then they head to Ridgway for a rematch on Tuesday, September 7.