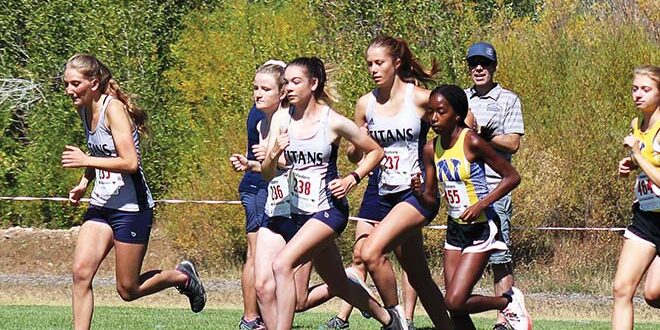 The Crested Butte Titans cross-country team got to stay in the valley last weekend as they raced at the Cowboy Invitational in Gunnison on Saturday, September 18 finishing with a win, a top 10 result and a strong effort across the board from all of the Titan athletes.

The big news for Crested Butte was they had a full slate of athletes in the boys’ race as every Titan toed the line alongside 75 other runners.

“It was a good field and it was exciting to have nine boys line up,” says coach Shari Sullivan-Marshall. “We talked with them about working together and that ended up resonating with most of the kids.”

Connor Williams set the course record in Gunnison last year and had no one to work with in his effort this year as he took off from the start line and never looked back to cruise to the win.

“He just stayed out in front and ran well,” says Sullivan-Marshall.

Jake Pendy continued his rapid ascent as a freshman with a 12th place finish in Gunnison. It was his third race in a row where he shaved time off his previous five-kilometer mark mixing in with some stout competition.

“To be in the mix as an underclassman is great,” says Sullivan-Marshall. “He’s probably one of the fastest freshman we’ve had in a long time.”

Cormac Billick and Porter Washburn remained together through most of the race with the difference coming at the end as Billick finished in 38th and Washburn in 40th. It was Washburn’s final time racing on that course as he’s been there through all four years of his high school career and even more as he’s been on the course as a middle school runner as well.

Giles Billick was next for the Titans as the fifth scoring runner for the team result helping to push them into fifth place as a team out of 11 teams total. Meanwhile, the sophomores continued to work together and off of each other as they all posted faster times than last year on the same course.

“It was great to see everybody running as a team and implementing the strategies we gave them,” says Sullivan-Marshall.

Ruby Pendy led the four Titan girls at the race as she crossed in sixth place overall posting a time two minutes faster than her effort in Gunnison last year.

Sophia Komarek was next for the Titans followed by Sam Merck and Lilla Laird.

“They went out well and with good purpose,” says Sullivan-Marshall. “It was great to see Sam running faster than a week ago and Lilla held steady the entire race. I feel like they all raced really well.”

The Titans remain in the valley this weekend as they will be a part of the Elk Run 5k high school race Saturday, September 25. The girls will start at 8:30 a.m. and the boys at 9:15 a.m. at the intersection of Third Street and Elk Avenue before heading through the northwest part of town, out Peanut Lake Road and then turning back to finish at the start line. Two hundred high school runners from 13 schools are coming for the race and should be a new level of competition for the Titan runners.

“There will be some great competition,” says Sullivan-Marshall.