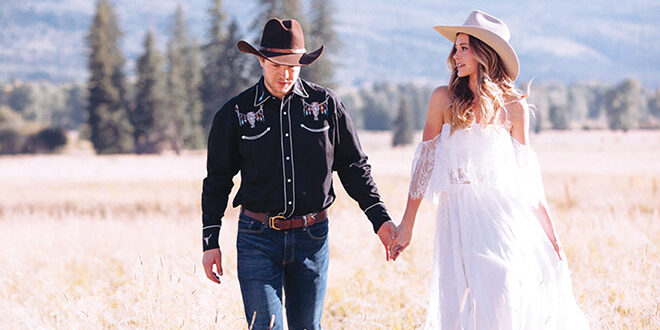 MATRIMONIO: Aaron Blunck and Morgan McNallie were married in Amalfi, Italy on August 5, 2021. The couple then celebrated state side with friends and family in Pagosa Springs on September 16, 2021. Congratulations! photo by Amy Melsa

Color time
Is it just us or does it seem the aspens are taking their sweet time in changing color this year? There are definitely good patches around the valley but there is also a lot of green left. That doesn’t mean people flocking in from the Front Range won’t be clogging up Kebler to search for the gold and orange so be aware and be careful when heading up there. There are definitely nice places to immerse in the gold and last weekend was pretty spectacular out in Buddland.

Jump onboard the Recycle Train
Sustainable Crested Butte is getting some recognition as its Recycle Train events were the lead story on Boulder’s Eco-Cycle newsletter this month. The article goes in depth on the local organization’s effort to provide a place for locals to drop off hard to recycle materials. And there will be a Recycle Train event this Saturday morning, September 25 at the Crested Butte Community School Parking Lot. It will run from 9 a.m. until noon or until the trailer is full (which happened last time).

March for Climate Thursday afternoon
A climate march and rally sponsored by the Gunnison Valley Climate Crisis Coalition is taking place Thursday, September 23 in Crested Butte. The march starts at 5 o’clock at the CB Four-Way Stop and will end at Rainbow Park for an Action Rally. There will be live music from the Slate River String Dawgs. Prior to the march, the GCEA will be serving brats and providing educational information on things like electric vehicles.

Bus parade up Elk Avenue to honor Schnoid on Sunday
Mountain Express is having a bus parade to honor long-time employee and friend, Jeff Schneider who passed away in an avalanche last season. The bus parade will begin through town at 11:30 a.m. on Sunday, September 26. Friends and family of Jeff are invited to ride on a bus for the parade. Anyone who would like to ride must meet at the MX Shop by 11:15 a.m. We are hoping the rest of the town turns out to line the streets and make some noise for the Schnoid!

County’s first schoolhouse was…
Where does Gunnison’s first schoolhouse still stand today and who constructed it? Visit the Gunnison Pioneer Museum, open daily from 9 a.m.-5 p.m. through September, and find out! Admission is $10 for ages 13+, $3 for ages 6-12, and free for those 5 and under. Follow on Facebook for more awesome local history! The museum will close September 30.

Congrats to Western
U.S. News & World Report has named Western Colorado University as a top 100 Regional Universities West (RUW) institution, landing ahead of its peers and tying with one in-state institution. Western tied for 61 with Colorado Christian University, and was ranked higher than CSU Pueblo, Adams State, Colorado Mesa University and Metropolitan State University of Denver. Western’s ranking is 14 places higher than last year’s rank. The 2022 rankings were released on September 13, 2021, and are based upon data from 1,466 U.S. bachelor’s degree-granting institutions. The RUW represents 14 states. Western also was ranked 28 among the best colleges for veterans.

Cameos: what is your favorite fall meal?