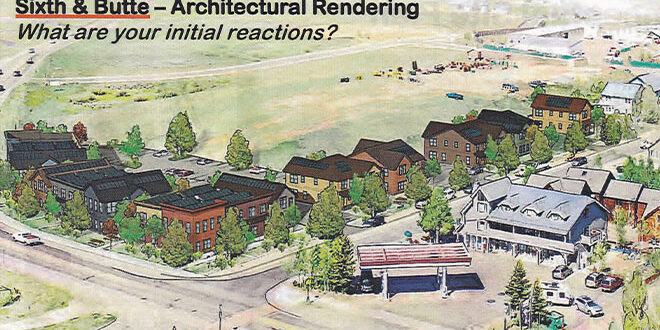 Both rental and ownership being contemplated

Development of a master plan for the proposed workforce housing area located at Sixth and Butte is under way and staff presented numbers, ideas and actual renderings of potential buildings to the Crested Butte town council Monday night. The preliminary proposal included between 59-61 units holding 94 beds, most of which would be rentals with some ‘for sale’ units available. The town hopes to attract a private developer to build the project that they could see starting in the summer of 2022.

Town planner Mel Yemma presented the plan and told the council the hope is to have a final plan in place for approval in early October. From there, Requests for Proposals (RFPs) would be solicited from developers and that request would include construction of units to help fill out the Paradise Park affordable housing neighborhood, thus bringing up the total number of new affordable units to between 72-75. Based on public feedback, the idea is to have a mix of housing types representing a diversity of people and lifestyles. Yemma asked council members for their initial opinions on the proposed artistic rendering of a plan that included three large apartment buildings adjacent to Gothic Road across from the Gas Café with fourplexes and duplexes tapering down to the current Poverty Gulch development on Butte Avenue.

“Whoa! In the context of everything it seems like a lot,” said councilmember Mona Merrill. “There’s also the North Village and Whetstone parcel and possibly Brush Creek. But we have a lot of lines at businesses right now and no plans for another grocery store. What does it do with the school? These buildings also don’t seem to blend into the old feel for me.”

“I’m excited to see the high density that I think we need,” said councilmember Jasmine Whelan. “I think the look fits in with the character of town. The amount of asphalt in there is stark so maybe we need more communal green space, but I know we need parking.”

“I agree we need the density, especially because we now know that single family zoning is racist and classist,” said councilmember Mallika Magner. “We do need to figure out how to provide services to the people living there. But aesthetically, I like it.”

“My first reaction was seeing parking problems,” said mayor Jim Schmidt. “There is already lots of parking being used there. I don’t like the change to allowing just one parking space for a one-bedroom unit. I don’t think that realistically is enough. Parking will be a mess.”

Schmidt also expressed he wasn’t thrilled with a “big blocky building on the corner.”

Councilmember Chris Haver said he liked the density and could have been comfortable with three-story buildings instead of two-story buildings. “I’m a little disappointed there are only 61 units,” he said.

Yemma reemphasized that parking and snow storage requirements were a big driver in density restrictions.

“It’s a good first stab at it,” said councilmember Jason MacMillan. “The two-story size works with the height and it fits in the neighborhood.”

Community development director Troy Russ warned the council that the Sixth Street corridor is nowhere near built out and that is where the town has designated big, tall buildings to be located.

“I too like the density. I think it appropriate,” said councilmember Ian Billick. “I don’t like the rendering showing 50-year-old trees because I think it provides a false expectation. As for numbers, until we have the hard conversation about regional projects and how they all tie in together, it feels like we are chasing the density issue project by project. That’s something we all need to come together up here and talk about.”

Schmidt suggested instead of solar panels on one of the big apartment buildings, perhaps a rooftop deck and garden would be better. “It would be a place for people in the development to use,” he said.

MacMillan agreed the idea was worth considering to help with the livability of the project and “providing some Crested Butte flair.”
MacMillan also advocated for more three-bedroom units to provide places for families to grow into. Housing consultant Willa Williford said that with Paradise Park, the sweet spot for units was two-bedroom places. “Our demographics indicate a lot of singles and couples in the market, especially those looking for rentals,” she said.

Schmidt said on the other end of the spectrum, many people might be interested in purchasing one-bedroom units to get out of the typical roommate situation.

The rental units would be geared to people making less than 100 percent of Area Median Income (AMI) while the ‘for sale’ units would go to those making between 100 and 200 percent AMI. The average cost of a unit without a subsidy would come in at about the $408,000 price point with the expected square foot building cost of about $350.

Williford said that given the dramatic increase in North Valley free market housing prices, she would not expect much problem finding buyers for the units. Town would help subsidize several million dollars in project costs for things like tap fees, a cleanup of the old town dump area and Climate Action Plan upgrades.

The goal is to finalize a council approved master plan for the project next month and have a developer selected by this winter. Ideally, construction could start early next summer.