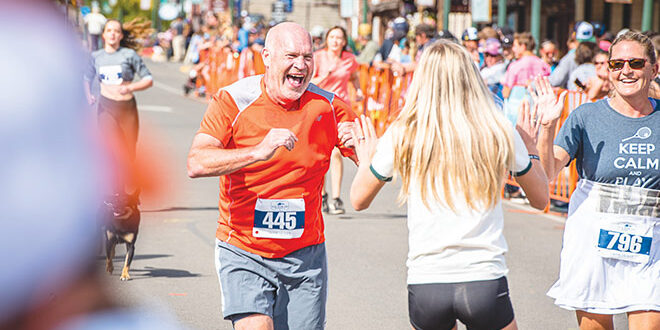 Emma Coburn’s Elk Run 5k race is back in person and this one looks to be the biggest ever as she is expecting 1,200 runners to toe the line on Saturday, September 25, all in an effort to raise money for Living Journeys. Living Journeys provides financial assistance, emotional support and enrichment programs to those suffering from cancer in the Gunnison Valley.

While the Elk Run 5k started as a citizens’ race, it has now morphed to include a high school cross-country race with teams from all over the state coming to compete and participate. In fact, this year’s high school race filled up and there’s already a waiting list for the race next year.

“I think it’ll be really fun,” says Coburn, who started her running career as a Crested Butte Community School Titan. “I raced in high school and it’s not necessarily the most fun experience so we’ll have a fun experience waiting for them. We’ll have teams camping out at the school. It’s so cool to see the high school race blossoming.”

The high school race kicks off from downtown Crested Butte at Third Street and Elk Avenue with the girls’ start at 8:30 a.m. and the boys’ race at 9:15 a.m. They make a loop through the northwest corner of town before heading out Peanut Lake Road to a turnaround spot and then head back into town to finish right back where they started.

The Elite and Citizens’ races will then take off on the same course starting at 10:15 a.m. This year’s Elite class will include two U.S. Olympians from the Tokyo games as well as a host of other top level runners Coburn has crossed paths with throughout her career. Although, she admits, many of them will be there not necessarily to compete.

“A lot of my professional runner friends will be there but it’s our off season so they’ll be more jogging along, cheering, drinking beer and dancing,” says Coburn.

There will be an awards ceremony at the start/finish area at 11 a.m. for the high school and Elite runners and then at 11:30 a.m. the runners, spectators and volunteers are all encouraged to switch out their footwear for ‘80s cover band The Goonies, also right there in downtown Crested Butte.

“We want the event to be fun and a high level,” says Coburn. “I travel all over the world to train and race and there’s no better place than right here in Crested Butte.”

Registration, course map and all information are online at elkrun5k.com and registration is open until noon on Friday, September 24. There’s also a place to sign up and volunteer. And if neither floats your boat, then at least come out and cheer.

“The more spectators we can have out there the better,” says Coburn. “For a tiny, little town, we’ve got a lot of fun people.”