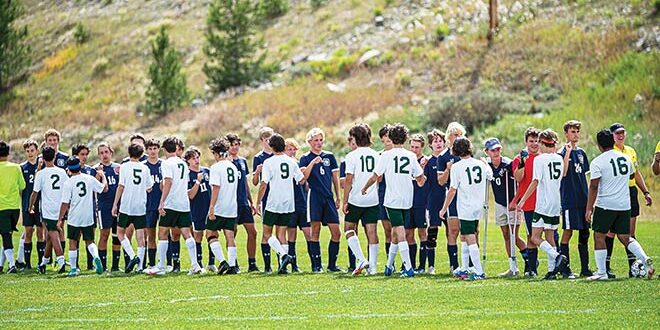 It was of little surprise that the Crested Butte Titans boys soccer team rolled to a win over the Colorado Rocky Mountain School (CRMS) at Homecoming Saturday, September 18. They had just played CRMS a week prior and won 8-0 so when CRMS came to Crested Butte, they ran into the buzz saw once again falling 9-0.

“We wanted them to use the game to focus on things, both big and small, that will make us successful,” says coach Bob Piccaro. “Ball pressure, first touches, movement off the ball and getting shots on goal.”

The day was perfect for a Homecoming game with a hint of fall in the air, a live performance of the National Anthem complete with Joe Fitzpatrick holding the flag in his military uniform, the Titan Booster Club out in force grilling up some food for the fans and a tractor pulled up lifting a couch in the air for some overhead seating for a handful of lucky fans.

The Titans fed off of the energy from their hometown crowd and opened the game at Mach 1 speed led by their senior group of players opening the scoring in the second minute when Rowan Featherman pushed the ball ahead to Thomas Nichols and Nichols slipped it past the oncoming goalie.

Nine minutes later Featherman did it again as he found Trent Pulliam overlapping the strikers to get a pass and scored. Grayson White then became the third senior to score in a row when a cross from Ace Gaither bounced off the far post and White followed to poke it in for a 3-0 lead 15 minutes into the game.

CRMS shook off the bus ride to step up their game and play a more compact defense stalling the Titans’ attack the next 15 minutes but the relentless pressure eventually bore fruit once again as Otto Billingsley assisted Jacob Bernholtz for Crested Butte’s next goal. Bernholtz then turned and assisted a goal from Blue Gardner two minutes after that and Brendan Hartigan and Ben Barney followed with one goal each for a 7-0 Titans’ lead at halftime.

Davis McNeill then joined the senior Homecoming celebration in the second half. Ten minutes into the second half, McNeill’s set play attempt was deflected but fell to Avi Narayana for him to score. McNeill then got a goal of his own in the 75th minute driving a low hard shot from 20 yards out to seal the 9-0 Crested Butte Titans win.

“There were some good things and just some that were ok,” says Piccaro. “Some players are starting to find their first touch, others are still looking on Saturn for it. We need to keep up the competition at practices among the players to keep the edge needed of intensity.””
The Titans head into the lion’s den on Friday, September 24 as they travel to Telluride for their first match of the season against the notoriously strong Telluride side.

“This will be the real thing,” says Piccaro. “We better get our heads in focus mode and get hungry to continue to grow this week at practice.”

Following that, the Titans then host Salida on Tuesday, September 28 at Rainbow Field at 4 p.m.