Author discussion on September 21 at the Center for the Arts

I look at a trend and ask the question, if this goes on what will the world look like?” says New York Times Bestseller science-fiction author Paolo Bacigalupi. “Let’s just assume that everything is burning in the future, there’s an increasing population, decreasing water supply, there’s more mega droughts and politicians who won’t engage with facts. If we turn the volume up to 11, what does it look like?”
The world Bacigalupi imagines as the backdrop for his 2015 sci-fi thriller, The Water Knife, is eerily not far off from the reality we currently live in as he explores the not-too-distant future impacts of climate change and drought in the American Southwest. In partnership with Townie Books, Bacigalupi will be discussing his inspiration for The Water Knife with local water expert Ashley Bembenek on Tuesday, September 21 at the Center for the Arts.

Previously an online editor for the High Country News, Bacigalupi notes how even 15-20 years ago the topic of climate change and its impacts on the Western landscape was emerging more and more.

“Our journalists were starting to cover a lot about climate change, the Colorado River Basin, the scarcities, the politics and the bickering between a lot of difference parties,” he says. “Something was afoot already and there were indicators that things weren’t going in the right direction.”

One of his biggest inspirations to write The Water Knife came in 2011 when Texas was experiencing extreme drought, electricity shortages and low water supply.

“Rick Perry, the Governor of Texas and a presidential candidate at the time, was running around telling people to pray for rain,” Bacigalupi says. “I was really interested in the idea of people who prepare and plan and engage with reality and the people who engage with magical thinking. It was these really complex and different environmental threats combined with magical thinking as the solution was when I realized I had to write The Water Knife.”

The story takes place in the American Southwest in the near future, and follows three characters with different backgrounds and perspectives as Nevada, Arizona and California battle for dwindling shares of the Colorado River.

“I was looking for a way to talk about climate change and to set it in an ecosystem that was viscerally understandable to other people, and the Colorado River Basin and the Southwest is something I’m familiar with,” he says.

Having grown up in Paonia and now splitting his time between Paonia and Crested Butte, Bacigalupi is no stranger to the impacts of climate change on the Colorado River Basin, the Western Slope and the Gunnison Valley.

“I grew up on a farm, so we have irrigation rights and you have a certain amount of water. I was familiar with those sorts of dynamics of what scarcity looks like,” he says.

Bacigalupi recalls noticing more and more wildfire smoke every summer and lower water levels in the rivers and reservoirs, while the first signs of fall appear later in the year and the gap between the first and last freeze of the season is getting shorter and shorter.
“All those things were known impacts and predicable and we’ve been watching it slowly build up around us until the point where you’re finally starting to see this is going to be consequential,” says Bacigalupi.

As he spent time writing about climate change for the book, Bacigalupi says that has crossed over to his real-time, real life decisions.
“One of the things I thought about when I was deciding to commit to buy property in Crested Butte and live here and be here long-term, is that you can’t help but evaluate every sort of infrastructure decision you make. Will I still like it here when the forests have all burned down and all the snow has melted and there’s not a ski area anymore? How do I feel about living here when all these hills are covered with sage brush instead of aspens?” he says. “It’s not really a question of if, it’s more a question of when we’re going to see all these ecosystems shift. And they’re going to shift catastrophically.”

Bacigalupi also notes how interconnected the world is, and how the story explores the snowball effect climate change can have on civilization.

“The fascinating thing to me is when we talk about climate change a lot of people tend to think they’re protected or they’re living in the spot that won’t be as impacted or is the more resilient spot. We like to tell ourselves we’re civilized, we know better, we have good stable systems that are going to buffer us. But the truth is we live in an incredibly interconnected world.”

For example, he says, “Crested Butte doesn’t have a growing system, it needs food, you need those farms in Iowa or wherever else to have stable growing systems. But if Iowa is in a drought and you have to cut off its water, you can’t just say we’re all good here at the headwaters because then all of a sudden food is triple the cost of what it used to be.”

Bacigalupi says if he was writing the story today, he fears the environmental and political premise would be much worse that what he originally imagined back when the book was published in 2015.

“At the time it was published there was a wet season in California and we were joining the Paris Climate Accords and I thought, oh maybe I got the trends wrong. Maybe we have more time, maybe I’ve just gotten it wrong. You start to feel silly but also relieved,” he says. “But just because we have one great winter and the skiing is great, we’re only reacting to the short-term story and not remembering the overarching story. Because then I was wrong, we’ve actually been dumbing down.”

He notes that writing it today, he would have used COVID as a touch point. “I would have taken into account the fact that we as a society can’t figure out the question of how to fight COVID and half the population is fighting against the health protocols.”

On September 21 at the Center for the Arts, Bacigalupi will be discussing the trends he examines in The Water Knife as well as discussing real world water issues in the West with local water scientist Ashley Bembenek. Bembenek is also the executive director of the Coal Creek Watershed Coalition, an organization actively working to protect and restore the watersheds surrounding Crested Butte.

“We’ll be having a back-and-forth discussion about where we’re at, what the future might look like and talking about what things might be done, what are the next steps and how do we do better and resolve these things,” says Bacigalupi. “I hope people will start looking around and asking, where are we going, what are we doing, what can I imagine and what can I imagine better, instead of what can I imagine worse. We’ve always survived together in cooperation with one another. I hope when somebody reads The Water Knife they start thinking and imagining the real functional steps we can collectively make to go in a better direction.”

The discussion will take place at the Center for the Arts on Tuesday, September 21 at 5:30 p.m. For more information about The Water Knife and Bacigalupi’s other books, visit windupstories.com. 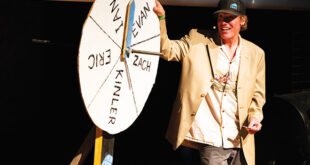 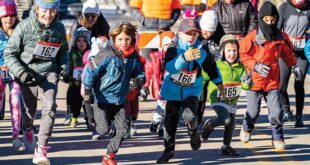 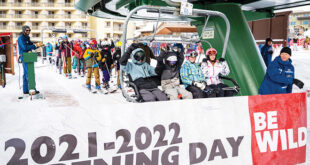 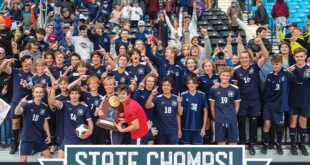