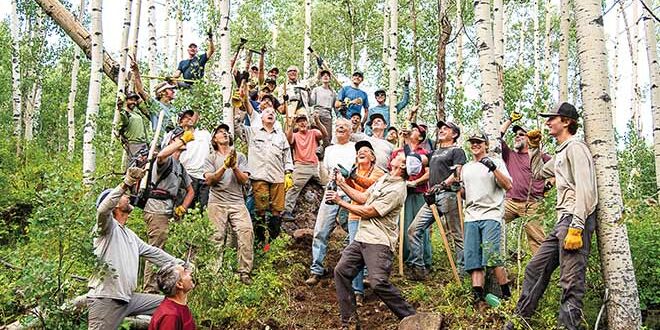 On September 8, 2021 after three years of work including 17 workdays, some National Trail Days, some overnighters and countless volunteer hours, Middle Cement and Fenceline are now legitimate and open to the public.

It actually officially started back in 2017 when the idea of building the Middle Cement trail and a realignment of the Fenceline trail to make it legitimate and open to the public got a subtle nod of approval provided CBMBA got approvals from both the Sustainable Tourism and Outdoor Recreation (STOR) committee and stakeholders. Which they did, so the plan spent 2018 and 2019 in the Forest Service scoping process and was ultimately approved.

In 2019 the dirt started flying as CBMBA and legions of dedicated volunteers kicked the entire project off by building Phase I, aka Stumpjumper, splitting off from the Warm Springs trail and connecting to the Lower Cement Creek trail.

“Stumpjumper is a ‘lunch ride’ for the CB South folks,” says Ochs. “It provided an amazing opportunity.”

CBMBA then dedicated its efforts the next year to Phase II of the Middle Cement Trail to take it from the top of Stumpjumper, up valley, with lots of steep exposed hillsides rife with rocks, trees and gullies standing between that and the ultimate goal, connecting to Fenceline.

Again, with massive help of volunteers and the efforts of the Crested Butte Conservation Corps, Phase II was finished and that left them one last stretch, Phase III, to go in 2021.

CBMBA and the outpouring of support from volunteers kept plugging away at it at their annual overnighter and were just 454 feet from getting it done. One last workday on Wednesday, September 8 then sealed the deal.

“That was a very rewarding moment,” says Ochs. “4.3 miles of trail are now legit and the most dangerous part of Cement Creek Road is eliminated and you can be on singletrack. It was so cool to see how much effort the community put into this one to see it finished.”

And that’s just one part of other projects that have been underway in the Cement Creek drainage. While CBMBA was busy with Middle Cement and Fenceline, the Forest Service has been in the midst of a Herculean effort on Trail 405, aka Double Top.

“What they did on 405 is amazing and a huge accomplishment,” says Ochs. “The work done out in that area the past 10 years has just been incredible. It’s a whole new playground.”