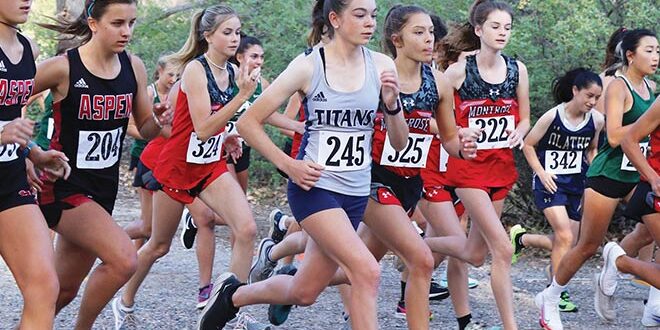 The Crested Butte Titans cross-country team officially kicked off the season as 13 athletes competed at the Tiger Invitational in Grand Junction on Saturday, September 11.

A handful raced the week prior in Colorado Springs but this was the first race for the entire team and they were able to put their training to the test after five weeks of preparation for a lot of the Titan runners.

“Everyone was ready for it,” says coach Laura Puckett Daniels. “Because we let a lot of the kids wait longer for their first race, their fitness was better. We spent time building mileage slowly so they can stay healthy.”

The Tiger Invitational had both varsity and JV races for boys and girls and the Titan coaches used the opportunity to provide their athletes a chance to open the season on a positive note.

“We wanted to put them in a race where we’d thought they’d be competitive,” says Daniels. “We have a very young team and for a lot of them, racing is a new component so we wanted to find the right fit for them to find success and be proud of themselves.”

In the end the Titans had an extremely positive experience in Grand Junction as they saw success at both the varsity and JV levels.

Ruby Pendy was the lone girl to represent the Titans in the girls’ varsity race. She had a prolific season in her first year racing cross-country last year and is back on track this season. The coaches decided to challenge Pendy in Grand Junction giving her a new race strategy to see how it would pan out.

“We told her not to be scared to go out in front at the start,” says Daniels. “Let’s go out hard and see what happens.”

Pendy did just that taking the lead through the first mile and then hanging tough through the next two miles to finish in third place tying her personal best time from last season.

“She stayed mentally tough and pushed all the way to the finish,” says Daniels.

The three remaining Titan girls then toed the line for the JV race and all placed in the top 10 for a positive start to their 2021 seasons.
The Titan boys had four line up for the varsity race with three seniors and lone freshman Jake Pendy.

Connor Williams took off from the start line and never looked back cruising to the win 40 seconds ahead of his closest competitor.
Meanwhile, Jake Pendy continues to take the bull by the horns in his first season racing high school varsity as he placed eighth with more to come as the season continues.

“For him to start off like this is awesome,” says Daniels. “Jake’s future is looking really bright.”

Cormac Billick set a personal record time in his effort that day to place 25th and Porter Washburn went out fast but was eventually slowed down by his body to place 28th.

Five JV boys all got a chance to test the waters and looked to be spot on in their training and development with solid results in their race.

“They really don’t have much experience so it was cool to see them out there figuring it all out,” says Daniels.

The Titans stay in the valley this weekend as they head to Gunnison on Saturday, September 18 to race. The boys’ race starts at 11:15 a.m. with the girls set to run at 11:45 a.m. The course is on the Van Tuyl trail system behind the middle school.