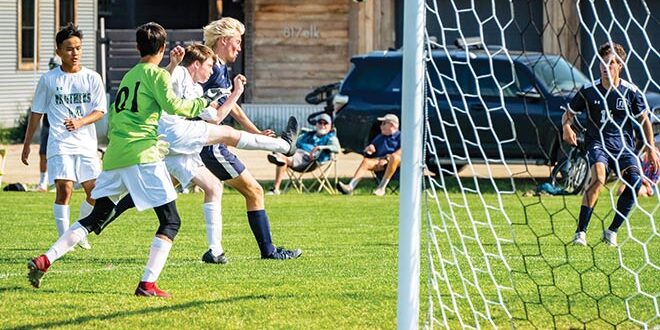 “They were focused, positive and the execution was there”

After spending two days on the road, the Crested Butte Titans boy’s soccer team brought home two wins including their first league win of the season.

The Titans continued to test their mettle with another 3A showdown when they hit the road to play Manitou Springs on Friday, September 3. Manitou Springs brings a high-paced game to the field and provide a good challenge for the Titans.

“We were expecting a big, powerful 3A team and that’s somewhat what we got,” says coach Bob Piccaro.

Friday night the energy was electric, literally, as a lightning delay during the JV game earlier pushed the varsity game back and when the teams were warming up, the field lights came on injecting another layer of excitement for the game.

Both teams came out at race pace for the opening 10 minutes exchanging attacks but Crested Butte’s defensive shape and goaltender Cedar Fessenden held the Manitou attack in check.

Meanwhile, Crested Butte’s midfield established ball possession with quick passing and opened up some seams in the attacking third for a couple of early chances. Manitou’s effort showed little sign of slowing down but Crested Butte maintained their efforts as well to match the intensity on the field. Fresh legs on the field proved advantageous for the Titans as they continued to move the ball quickly in and out of trouble with strikers Blue Gardner and Jacob Bernholtz relentless in their pursuit of any and all opportunities on offense.
Crested Butte finally broke the seal on the Manitou goal when Gardner battled his way past two Manitou players to gain a step at the top of the 18-yard box and drove a low shot past the Manitou goalie for a 1-0 lead.

The combined efforts of the striker crew and midfield created a second goal for the Titans seven minutes later when a series of quick passes through the middle third of the field left Jamis Matlock with the ball and headed into the attacking third. Matlock took one look and slipped the ball through a small gap to Bernholtz who poked it past the oncoming goaltender to put the Titans up 2-0. Gardner then struck again in the final minutes of the first half to put the Titans on top 3-0 heading into halftime.

“The keys were the execution of all the stuff we have been concentrating on such as first touch, moving the ball quickly, facilitated by moving off the ball and timely runs up top accompanied by finishing and a stout defense,” says Piccaro.

Given Manitou’s propensity for speed and a dangerous attacking unit, the Titans knew the opening minutes of the second half could be the biggest minutes of the game. Manitou came out looking to strike first but the Titans stepped up their game another notch to quash the initial surge. Ten minutes into the second half, Crested Butte struck again as Davis McNeill chipped a cross into the 18-yard box and Gardner fired a shot. The initial strike rebounded off a Manitou player but Bernholtz was there to finish it off for a 4-0 lead.

“Getting the first goal in the second half was huge,” says Piccaro. “That team could have switched momentum on their home field with a goal against us and a different scenario could have unfolded. But our team showed resilience and depth. We wanted it more.”
The lightning then rolled back in and after an initial lightning delay, the weather showed little sign of letting up and the coaches and officials agreed to call it a game as Crested Butte finished with the 4-0 win.

“I was very happy with the team’s performance,” says Piccaro. “They were focused, positive and the execution was there.”

The Titans then headed three and a half hours in the other direction on Saturday, September 4 to face Caprock Academy in Grand Junction. Caprock is a new program and Crested Butte had little trouble out-pacing the young team to cruise to a 10-0 win. Bernholtz finished with a hat trick, Gardner and Brendan Hartigan each scored two, Matlock netted two as well and finished with three assists and McNeill added in one while Thomas Nichols recorded two assists and Cedar Fessenden and Kaiden Marziano had one assist each.
Following their success over the weekend, Crested Butte finished off another 3A opponent on Tuesday, September 7 when they took down Delta 8-0.

The Titans return to league play this weekend heading to Carbondale on Friday, September 10 to face Colorado Rocky Mountain School and then hosting Ridgway on Saturday, September 11 at Rainbow Park at 3 p.m.