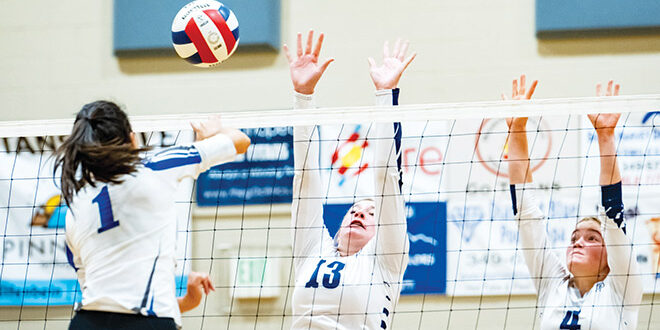 Volleyball hopes to get back on winning track this week

The Crested Butte Titans volleyball team is still searching for consistency as their starting rotation remains in flux with players still in and out with injuries. Nevertheless, their grit and competitiveness continues to shine through and while they lost all four matches over the past week, all is not lost.

The Titans hosted the Center Vikings on Tuesday, August 31 and jumped out to take the opening set 25-21 making the most of their relative health and the home court advantage.

“We just came out strong and ready to step up,” says coach Cierra Abbott. “The energy in the gym really helped.”

The battle continued into the second set as the two teams traded off points throughout before the Vikings edged out the 27-25 win but injuries started to creep in on the Titans forcing Abbott to change things up and mix in players and rotations and Center sealed the match win over the Titans winning the next two sets 25-21 and 25-17.

“We had some unfortunate injuries and I had to rotate some things around mid-set which can be hard,” says Abbott. “They still tried their best and played through the line-up changes.”

The Titans returned to workouts and Abbott continued her efforts to develop the team and players while still maintaining her overall philosophy regarding injuries.

“Their bodies and their well-being is my priority,” says Abbott.

The Titans then headed into some intense non-league play on Saturday, September 4 at a tournament in Gunnison. Year in and year out the Titans are one of the smallest teams at the tournament and this year they were again with opponents out-sizing the Titans making for some tough competition.

The Titans dropped all three matches in the tournament as Abbott continued to change rotations and adjust line-ups throughout the day. Her team responded though to put up a fight through all three showdowns.

“I played two different line-ups through the three matches and we definitely gave the bigger teams a run for their money,” says Abbott. “No matter what line-up we have, they’re going to give me everything they have and I think they had fun playing those bigger teams.”

The Titans return to the road this weekend as they head to center to face Trinidad, a team they beat last year.

“The girls are looking to keep that streak going,” says Abbott.

They will then host Telluride on Tuesday, September 14 as part of the Titans Homecoming Week.

“They’re excited to keep that rivalry going,” says Abbott. “We’re working on getting some players back from injuries and I’m excited to see how that looks.”