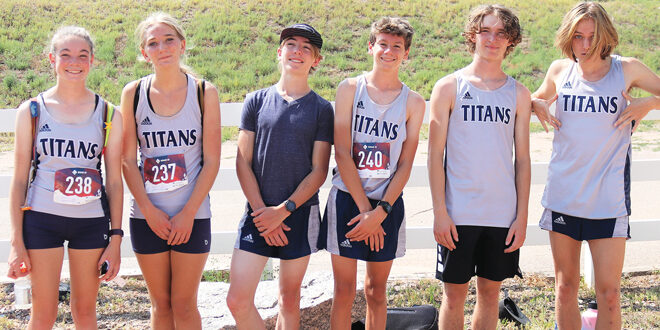 “I think they’re going to surprise themselves this year”

While the Titans have 15 athletes on their team, the coaching staff of Laura Puckett-Daniels, Shari Sullivan-Marshall and Vince Rodgers opted to take just six to the opening race for a variety of reasons, one of which was training.

“We wanted to give most of our runners five solid weeks of training before their first race,” says Sullivan-Marshall. “We took these six based on their summer training and fitness.”

The race itself is unique as well as it is the only time a meet is held on the state championship course all season giving runners a glimpse prior to the big race at the end of the season.

The girls started things off for the Titans as Ruby Pendy and Sophia Komarek toed the line alongside 81 other runners, another unique aspect of the race. Last season, races were limited to wave starts with no more than 25 starting at a time due to COVID protocols. But this year, the race format is back to normal.

“It was a brand new experience for both girls and I’m glad they had that because that’s what cross-country is all about,” says Sullivan-Marshall.

Pendy had a stellar season last year and picked up right where she left off in her first race placing fourth and posting a faster time than her effort on the same course at the state championships last season.

“She ran very confidently,” says Sullivan-Marshall. “She was kind of in no-man’s-land on her own the entire race which is a tough place to be.”

Komarek finished her day in the top half of the field placing 42nd overall.

“She had a great first race,” says Sullivan-Marshall.

The Titan boys then stepped to the line with seniors Connor Williams, Cormac Billick and Porter Washburn and freshman Jake Pendy carrying the Titan colors.

Williams’ experience was far from ideal as he struggled and was forced to drop from the race two miles into the endeavor. Pendy made the most of his inaugural high school race though placing 26th out of 110 runners.

“He ran awesome,” says Sullivan-Marshall. “He just trusted his fitness, I was really impressed and I’m excited for his season ahead.”
Washburn finished the day in 51st place and Billick crossed the line in 63rd.

“It was great to see those boys race and we still have five others waiting in the wings,” says Sullivan-Marshall. “I think they’re going to surprise themselves this year.”

The entire team is headed to Grand Junction for the Tiger Invite on Saturday, September 11 to get everyone into race mode for the rest of the season.

“It’ll be fun to have the whole team there, get everyone’s baseline and see where they are,” says Sullivan-Marshall.

Share
Previous Volleyball hopes to get back on winning track this week
Next Benchtalk: September 10, 2021