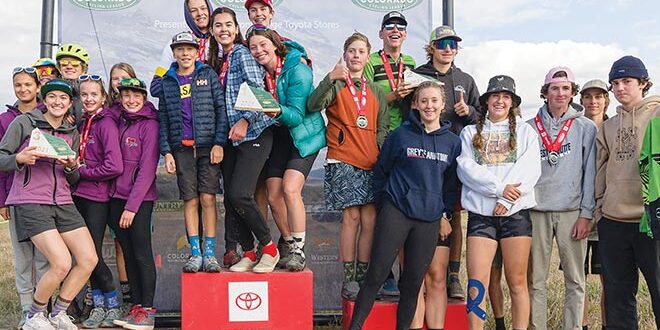 Every rider headed to state championships

The high school mountain bike race season is ramping up in the final month of racing and the CB Devo high school team is right on pace for a strong finish to the season as they rallied to a second place team finish at the regional championships in Eagle on Sunday, October 10.

The Eagle course is unique and has been problematic for the Crested Butte team over the years. While there was still a modicum of carnage for the Devo athletes, they put in their best effort as a team ever on the notorious course.

“Eagle is more of a bike handling skills course,” says coach Jenny Smith. “I think we did really well and that shows the influence CB Devo has had. The kids can ride so well.”

JV Boys rider Lance Lakoski was one that fell victim to misfortune, but it wasn’t because of the course. While Lakoski was mixing it up in the top three, his saddlebag fell off and into his rear wheel breaking some spokes. Lakoski rolled with the situation and while he lost touch with the leaders, he remained in third place and finished the season the overall regional champion.

One of those riders he was chasing was Eli Nolan, who is currently attending and racing for the Colorado Rocky Mountain School. Nolan finished the day in second place and third overall in the conference.

Oliver White continued to climb up the rankings and appears to be on track for the state championships. White had a breakout performance in Snowmass two weeks prior and kept it going placing ninth in Eagle.

“It just shows his growth as a rider,” says Smith.

Luca Loperfido is on the same trajectory as he calmly rolled his way to a 13th place finish in Eagle.

Following that same composed riding style, captain Katie O’Neill overcame some carnage in her JV Girls race. O’Neill crashed in the first lap turning her handlebars 45-degrees sideways and after some failed attempts to turn them back, decided to roll with it and finished the day in 13th place.

Team captain Connor Knight had a similar mishap in the sophomore boys’ race. Knight was in fourth place until he crashed but recovered well enough to hold onto fifth place, a testament to his commitment all season.

“He just works so hard and is doing amazing,” says Smith. “The crashes, for me, just reflect how hard they were trying.”

Cy Davis ended up starting in the back of the pack in that same race and after dodging a pile up, remained focused and relaxed to push into a 32nd place finish.

Finn Veit has been nothing if not consistently strong all season and kept that going in Eagle finishing in third place for his third top-three finish in a row and taking second overall in the region. He’s been matching wits with another rider who has been in the other wave of each race so Smith looks forward to when they will be shoulder to shoulder at the state championships.

“I’m keen to see him at state where they’ll have all the fastest boys racing together,” says Smith.

Meanwhile the Bullock brothers and Sam and Kenny have been on a rocket ship ride through the field over the course of the season. After placing in the 20’s in the first race of the season, they’ve continued to push throughout the year with Sam placing 10th in Eagle and Kenny 11th.

Piper O’Neill then finished the day for CB Devo lining up for the varsity race and finishing in 11th place.

As of press time, every single CB Devo rider has qualified for the state championships in Durango October 23-24, a new benchmark for the team.

“I don’t think we’ve ever had that,” says Smith. “We have a pretty fantastic little team.”