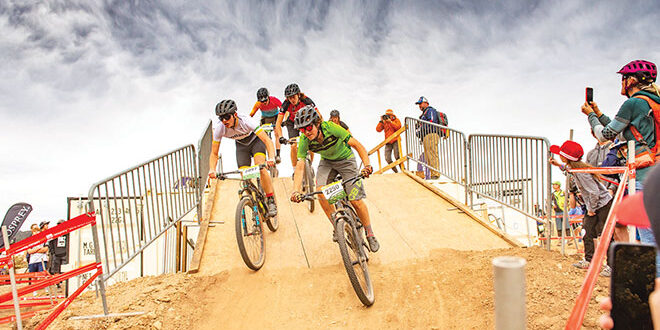 “It was pretty cool to get on the podium”

The CB Devo high school bike team started their workouts at the beginning of August and all of the miles and miles and… miles of training ultimately paid off as the team took third place in Division 3 at the state championships in Durango.

The week leading up to the big weekend was somewhat hampered by the weather as snow put the kibosh on one day of planned riding. Nevertheless, they took it in stride and took an afternoon to give back putting in some time doing trail work with Gunnison Trails. The team hit the road Friday, October 22 and was on their bikes that afternoon to get a look at the course.

“We pre-rode the course along with the other teams and, for a lot of the kids, that’s when they realized the venue and the field of riders was so big,” says coach Jenny Smith.

“Some of us had been there before but for a lot of them, it was definitely a shock,” says captain Katie O’Neill. ”But I think they adjusted to it pretty well.”

The racing opened Saturday, October 24 with the freshmen boys as Finn Veit, Sam Bullock and Kenny Bullock lined up in the first wave and Ebbet Weinberg in the second wave.

“I think they were equally nervous and excited to race first,” says Smith.

Veit has been tearing up the courses in their league showdowns and continued his effort against riders from throughout the state to place ninth bringing massive points to the team score.

Sam was next for CB Devo to cross the line coming in 21st to score key team points as well and Kenny finished 55th out of the two waves of riders. Weinberg was in the second wave of riders and finished the day in 73rd overall.

“Finn had an awesome race,” says Smith. “Sam had the ride of the day in that group in my opinion and Ebbet got to start near the front of the second wave and I think he had a lot of fun up there.”

The JV boys then rolled up to the start with Lance Lakoski getting the call up to the front row with Crested Butte kid riding for CRMS Eli Nolan not far behind him and CB Devo teammates Oliver White and Luca Loperfido a little further back in the start field.

Lakoski and Nolan were wheel-to-wheel at the final sprint with Lakoski just edging out a ninth place finish to keep the team points pouring in while Nolan finished in 10th. White had a great result to place 35th and Loperfido crossed the line close behind in 39th place.

Saturday’s excitement then wrapped up with the JV girls race and team captain O’Neill in the saddle for CB Devo. O’Neill put together her best effort of the season to come in 33rd place high enough to tack on some more team points for CB Devo.

“I think that was her best race of the season,” says Smith.

“It definitely was my best race,” says O’Neill. “Durango was the one where I felt strong the whole race.”

With team scores updated after each race, CB Devo was sitting in the top spot after one day of racing.

“It was cool to see we were on top but we knew teams like Aspen/Basalt had a lot of varsity riders racing the next day,” says O’Neill. “We knew it was going to hard to hold that spot.”

Sunday started with the sophomore boys’ race and captain Conner Knight lining up in the first wave with nerves running rampant. Knight turned nerves into power to ride to a 28th place finish among the massive throngs of athletes on course and Cy Davis closed out his season with a great effort as well.

Captain Piper O’Neill then put the finishing touches on the weekend of racing for CB Devo with five teams in the running for the top three spots at that point. Piper was mixing it up with another rider from one of the other top five teams and sprinted her way to a 21st place finish racking up another slew of points for Crested Butte.

The last race of the day was the varsity boys and since CB Devo had no one in the class, they had to sit and wait to see how the point totals played out for the final tally.

“We just had to see how the varsity boys shook out,” says Smith. “We didn’t have any control over the outcome in the end.”

While two teams managed to take first and second with their varsity boys’ riders, CB Devo had amassed enough points to take third.

“Top three is awesome,” says Smith. “It was pretty cool to get on the podium. The last time we were there was in 2019. Everyone progressed throughout the season as people found their feet.”