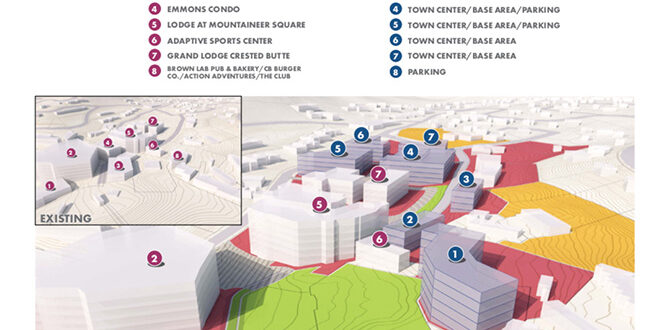 How do we activate the base area

The town of Mt. Crested Butte is in the thick of drafting its Master Plan, which will provide guidance on decision-making for the town’s future planning and direction. In its first phase, the town has conducted a series of community engagement events this year to gather input from residents, visitors and the greater community, including a recent public open house. Now headed into phase two which includes design, strategy and planning, the Master Plan team discussed the feedback and drafted plans with the town council and planning commission in a joint work session on October 19.

“What are we really envisioning for our community, how would we like to see that happen and how do we get there?” explained Elena Scott of Norris Design, the group working with the town to develop the Master Plan.

Scott noted that when talking with the community throughout this summer and fall, the top two items were housing and improving the base area. The majority of the October 19 discussion focused around the base area.

“How the base area functions as a primary community hub for us is really critical into how the rest of the community functions,” said Scott. “We want to start with activating the base area and having more vibrancy there.”

She continued, “We want to try to create a sense of arrival. When do you know you’re here?” said Scott, referencing Elk Avenue as an example for the town of Crested Butte. “People had a hard time pinpointing that here. How can we grow some of that community potential, restaurant potential and create better east/west connections.”

The general feedback of the current base area is that it’s difficult to find your way around. “There’s no natural lead through the space or visual view of where you’re trying to get to,” said Tori Aidala of Norris Design. “We’ve put a fortress around our town center.”

“There lacks east/west connectivity to get through the base area,” said Scott. “We have some great structures, and some that are aging, and some that are in the wrong spot.” She also noted that the Master Plan conversations with the community and stakeholders have brought up issues with circulation, delivery drop-offs and operations.

One idea presented in the draft was to create an arrival plaza where the Emmons building and Treasury Center are currently located, extending all the way from Gothic Road to the ski lifts. The plaza could have a delivery loading and drop-off on a lower level at Gothic Road, with stairs or escalators leading up to an upper plaza level for people making their way to the base.

“This would engage both Gothic and lead people into the core,” said Scott. “Currently, when you’re coming down or up Gothic everything is pushed right up on the road. There’s no easing in and up into the mountain and into the space.”
Town council member Dwayne Lehnertz noted that a similar key point of arrival and plaza area could be accomplished off of Snowmass Road where the Axtel and Whetstone buildings and parking are located.

Lauren Koelliker expressed concern that this plaza concept wasn’t connected to the current transit center or parking areas, and would only capture people coming up the Rec Path. “Very few people would be going there. Most people are getting off the bus or coming from the parking lots. We need to really be thinking about where people are coming from.”

“How will people’s patterns change with change we create?” noted Scott.

Many existing buildings were missing from the Master Plan example rendering, including the Emmons building, the Treasury Center and the property that has included the Brown Lab, CB Burger Co, Action Adventures and the Club at Crested Butte. Town Manager Isa Reeb noted that base area and property owners have been included in the Master Plan conversations.

“We want to think about relocating, not displacing,” said Reeb. “Any time you see a building gone, we can put a better building in its place. And replace them in a way that’s more conducive to place-making and sense of arrival.”

“What was the initial reaction to these land and real estate owners in these meetings when you say, ‘We’ve got a vision for the base area and it includes your buildings not existing,’” said council member Roman Kolodziej. “What incentive exists for somebody to give up their building or sell it to someone?”

“None of them were surprised when I’ve talked to them individually,” said Reeb.

“They weren’t shocked but they were really intrigued,” said Aidala.

“It’s all about not looking at property boundaries,” said Reeb. “There’s lots of different ways I think it can happen. There’s also a potential that someone says I don’t want this property…it will be cheaper for me to donate it and take the tax write-off than to demo it and put something new on it.”

“You’re playing with other people’s investments with these ideas,” said planning commission member Sara Morgan.
“They’re at the table talking to us,” said Reeb.

“We have buildings that are 40 years old,” said planning commission member Lisa Lenander. “We have to consider those are going to start being taken down.“

“What happens if this plan is accepted and one of these key players doesn’t want to play ball and the Emmons building ends up staying there and you have all this open space and no view corridor? How do you navigate those different hurdles and adapt?” asked Kolodziej.

“We can create some guidance in what we’re trying to achieve,” explained Scott. “Could a different proposal come in, but it meets all those goals?” she said. “Can we achieve the same types of goals with a different plan? Possibly.”

“I 100-percent guarantee that the footprints that you see today will not be built,” said Reeb. “Never in the history of master planning has that happened.”

“Our wayfinding public outreach was extremely consistent that no one knew how to find the lifts,” said Reeb. The town is currently working on a wayfinding initiative to put in more cohesive signage around town. The wayfinding and Master Plan contractors are also collaborating and comparing community feedback. “For outsiders it’s really confusing for people and knowing where to park, where to walk after you park, getting to the lifts…There’s definitely a challenge from the outside perspective,” said Reeb.

“It goes back to the fact that we’re trying to create an active, vibrant space and creating space for it to be success,” said Scott. “We don’t have that in the current space for restaurants and retail to be successful.”

Lehnertz advocated for a grand lodge, or some space similar to the old Rafters restaurant. “Some place where everybody is going to show up and put on their ski boots. The central, anchor hub where everything flows to and from that area. That’s what’s missing. Nobody knows where to go because there’s no place to go.”

Planning commission member Nancy Grindlay liked the idea of a plaza opening up the base area. “I am concerned about the feasibility in how that’s going to evolve especially since we haven’t had any input from Vail about what they want to do about the Cinnamon building. A grand lodge would be really wonderful for a cafeteria and lockers and a place to hang out.”

The Master Plan team is taking the council and planning commission feedback into consideration, and the next joint work session is tentatively scheduled for some time January. The goal is to have a final Master Plan ready by the end of February.