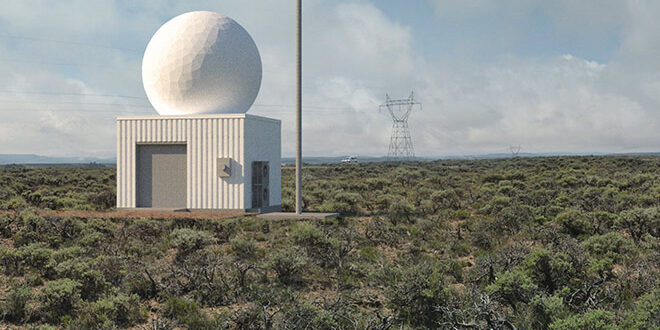 Should be operational next summer

A new weather radar will likely be installed in Gunnison next summer that will enable enhanced local weather forecasting and streamflow predictions to help water planners, flight operators, and wildfire prevention/mitigation efforts across the valley and possibly across the West. Gunnison County will serve as a demonstration site for the radar and in exchange the Western States Water Partnership (WSWP), which is providing the radar, will also provide the installation, radar technology and maintenance free of charge. Gunnison County recently signed a Memorandum of Agreement with WSWP to establish a public private partnership, and a final environmental assessment for a long-term lease with the Bureau of Land Management (BLM) is to be signed later this week.

The “gap filling radar” will be installed on BLM property south of Highway 50 in Gunnison, between County Road 32 and 32A. It will have a range of 100 kilometers, and studies suggest that it could help with general “water intelligence,” in addition to localized weather forecasting. The radar’s data will aid in streamflow predictions using accumulated winter snowpack measurements and in assessing wildfire danger and mitigation measures. This will be particularly promising for predicting and managing water flows in the Gunnison River, which flows into the Colorado River and faces increasing scrutiny as droughts across the west persist year over year.

WSWP purchased the radar from manufacturer and strategic partner Advanced Radar Company (ARC) of Boulder, and WSWP plans to install an entire array of 12 to 15 such weather radars in other rural, or gap areas, throughout the western U.S. “We have already begun simple site geotechnical work and power should be put in to the targeted building site in the next several weeks,” confirmed WSWP co-manager Vern Tharp of the Gunnison site’s preparation work this week.

The radar will add redundancy to existing Snotel sites across the valley which are used to measure snowpack throughout the winter and spring, and which help determine streamflow predictions. A recent study commissioned by the Colorado Water Conservation Division and executed by NASA, the National Center for Atmospheric Research (NCAR) and the National Severe Storm Laboratory, among others, found that better data from the temporary radar, combined with a better software forecasting tool from NCAR, increased the accuracy of streamflow forecasts for the targeted Upper Rio Grande River Basin by up to 30 percent.

The study determined that better snowpack accumulation data (using gap filling radars) combined with a better streamflow forecasting software can result in up to 30 percent better streamflow prediction accuracy throughout the spring and summer months. That equates to millions of gallons of water for Colorado, according to WSWP.
“This study was founded on the reality that – due to the line of sight restrictions of the existing collection of the National Weather Services’ Weather Radars – much of the Western U.S. has little to no weather radar coverage,” said Tharp.

Helping the airport
Tharp noted how important the radar would be to keeping local airport operations moving as smoothly as possible as well. “Better local weather forecasting could reduce the number of times the FAA shuts down the local airport due to abundance of caution and uncertainty as to the detailed local weather conditions and thus increase the predictability of flights into Gunnison to help local tourism / economic development.”

WSWP is a for profit entity owned entirely by a non-profit, the Colorado Wildlife Foundation (CWF). The radar project has secured the support of the Upper Gunnison River Water Conservancy District, the Colorado River District and the Western States Water Council, which represents all 18 western states. In a letter dated June 21, 2021, the UGRWD and Colorado River District wrote to express their support for federal funding for the purchase of raw data generated by the gap filling radar project.

As of this month, WSWP has secured more than $1.5 million in funding from the CWF and is seeking to increase funding by $2M in federal appropriations for the National Oceanic & Atmospheric Administration (NOAA) in support of National Mesonet Program acquisition of gap radar data.