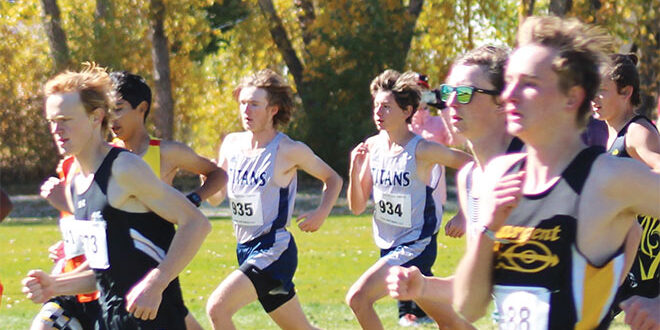 Big plans for regionals this Friday

hile the school’s fall break can stymie high school athletic programs, the Crested Butte Titans cross-country team took it all in stride with six Titans toeing the line at their league meet at the end of the break in Monte Vista on Friday, October 15 and coming home with a couple of top 10 results and on pace for their upcoming regional meet.

While the coaches always ask their athletes to keep up with workouts while on vacation, the reality is it can be hard to motivate without teammates to help with the push. But with some of the Titan runners staying in town, assistant coach Vince Rogers looked to keep the team atmosphere in place with those who were around.

“We wanted to keep it fun and we had a team hike planned but the snow kept us from that,” says Rogers.

Nevertheless, they still hit the road Friday morning bound for Monte Vista only to find some snow still in their way both on the road and at the race venue.

“It was kind of crazy, dicey roads getting over there and they had to delay the race an hour because there was still snow on the course,” says Rogers. “There were some slick parts out there on course.”

While part of the reason to go to Monte Vista was for some of the Titans to get all-league accolades, the main purpose was keeping the athletes engaged with their big regional meet on the near horizon.

“We wanted them to run strong, run consistent and think about the race as a warm up for regionals,” explains Rogers. “Get into their place and settle in, don’t try to blow the roof off times.”

Ruby Pendy did heed the advice yet still managed to put in another strong showing. While course conditions did slow things down for everyone, Pendy still ran her race to finish in second place and is currently ranked second among all 2A runners.

“She had first place in her sights the whole time and had a gap on the girl in third and just stayed there the whole race,” says Rogers.

Sophia Komarek was the only other girl to line up for the Titans and she ran her way to a 19th place finish.

“Both of them did really well,” says Rogers.

Jake Pendy posted the top result among the four boys who made the trip to the league meet coming in seventh place overall and first among the freshmen runners in the varsity race.

Porter Washburn crossed the line in 46th place, Giles Billick placed 51st and Connor Brown hit the line in 81st place.
In the end, Rogers felt it was well worth the trip to Monte Vista as they all adopted the plan for the event.

“Most of them were thinking of it as a warm up,” says Rogers. “It’s important to stay sharp and not lose that edge going into regionals.”

The regional meet is Friday, October 22 at Confluence Park in Delta. The course in known for fast times and Rogers feels the Titans have a big opportunity at the race. While individual runners such as Connor Williams, Jake Pendy and Ruby Pendy all look to punch their ticket to the state championships, the coaches also feel the boys team has a good shot at state and quite possibly the girls team as well.

“We’re pretty excited for our chances to qualify for state,” says Rogers. “If we’re able to pull off both teams qualifying, that’d be amazing.”