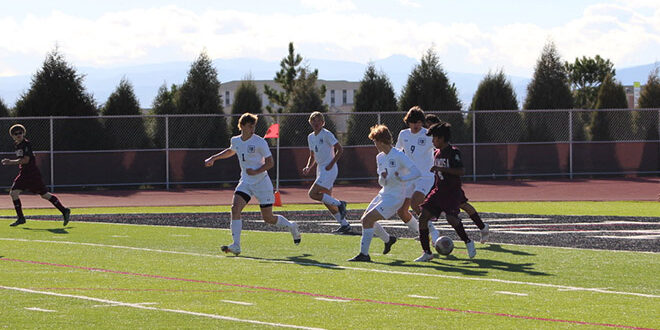 Senior day this Saturday against Telluride

The Crested Butte Titans soccer team coasted to a 3-0 win over the Alamosa Mean Moose on Tuesday, October 19 and now have one game left on the regular season schedule before heading to the 2A state tournament.

The Titans were coming off a week long break from both games and practices as the coaches decided to take advantage of the annual school break to give their players a chance to reboot.

“We wanted to give them a chance to get caught up on life and come back rejuvenated for the last push rather than partially burnt out,” says coach Bob Piccaro.

When they returned to workouts on Monday to prepare for the Alamosa game, coaches found that, for the most part, the break was just what the team needed.

“I was actually surprised with the conditioning level of most of the players and there didn’t seem to be any lull in intensity at practice,” says Piccaro.

They headed to Alamosa knowing the program’s propensity for tough defensive play and their ability to field opportunistic strikers who often capitalize on the few chances they get. What the Titans found when they got to the game was a squad that had been depleted for a number of reasons and Crested Butte went straight to work pinning the Mean Moose in their own half from the opening kick off.

After a couple failed attempts to crack the Alamosa defense down the middle, the Titans turned to the flanks to find success in the 11th minute as Blue Gardner and Ace Gaither combined to send Gardner free down the wing and to the corner. As Alamosa’s defense collapsed to crowd the front of their goal, Gardner found Davis McNeill open at the top of the 18-yard box with a pass and McNeill drove a low hard shot off the inside of the post for a 1-0 Titans’ lead.

Two minutes later, Gardner was at it again down the wing and sent his next cross into the box to Grayson White who struck a one time shot past the Alamosa keeper for a quick 2-0 lead.

Crested Butte continued to dominate possession and looked for another way to score opting to switch their attack to the left side. A series of quick passes between the defense, midfield and strikers sent a ball down the line to Nathan Sawyer overlapping wide. Sawyer collected the ball, took a look and drove a low cross into the six-yard box for Gardner to poke home and the Titans were ahead 3-0, 26 minutes into the game.

“We had some great work on the flanks and some guys are getting incredible finishes,” says Piccaro.

With the game well in hand, Crested Butte got a little complacent in their play. While they continued to maintain possession through the midfield and the back line of Eric Lain, Otto Billingsley and Finn Ramsey left nothing for Alamosa’s strikers, the Titans abandoned the wings trying to find seams in the middle third without much success and the times they did break through, shots were turned away by the Mean Moose goalkeeper to keep the score 3-0 at halftime.

The coaches asked the team to try some new attacking schemes in the second half as they had plenty to still work on with their game against Telluride on the horizon. While the intent was there, passes were a bit off the mark and Alamosa ramped up their effort defensively to hold the Titans to the 3-0 win by the final whistle.

“There was good passing, movement off the ball and they were executing the systems we’ve been working on,” says Piccaro. “Granted, they weren’t really pressured too much but it was a good welcome back, warm up game.”

The Titans close out the regular season at home on Saturday, October 23 against Telluride at Rainbow Field at 1 p.m. The Titans edged out a 3-2 overtime win earlier this season so the pressure is on Crested Butte in their second showdown.

“Telluride wants nothing more than to do to us what we did to them and they’re vying for a decent seed in the post season,” says Piccaro. “It’ll be a really good test for us.”