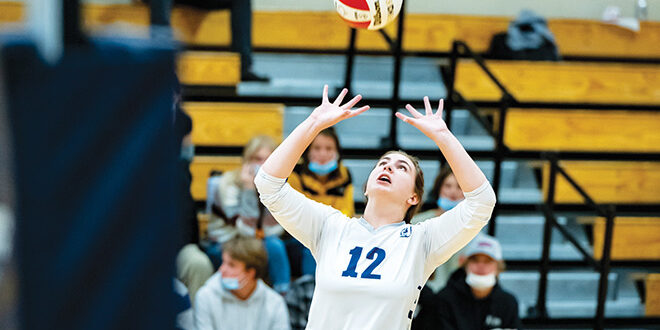 Tough loss prior to October break

It’s been a long stretch in match play for the Crested Butte Titans volleyball team and the hope is that the break helped some players heal as well as gave the team time to pull back together for the close of the regular season.

The Titans last played a match on Tuesday, October 5 when they hosted the Custer County Bobcats. The team recognized seniors Sami Lakoski, Hayes Freeman and Caroline Bryndal at the match and a win was well within reach but Crested Butte had to make changes to their rotation once again for the Custer County game.

“We didn’t have a player for the first set so I had to move players again,” says coach Cierra Abbott. “I had to move Hayes to setter and she always does a great job no matter where I need her but we did start a little wonky.”

While it was tough to find their mojo as a team in the first set, they still put together a solid effort only to drop the first set 25-17.

“They were actually pretty strong despite the weird rotation,” says Abbott.

Abbott and the team continued to struggle with cohesiveness on the court in the second set and while some individual efforts did provide points, the overall team dynamic spelled the Titans’ demise in the second set as well losing 25-18.
Abbott took the break between the second and third set to get her players back on track as a team as she knew it was a winnable match if they would just pull together and execute the plan she laid out.

“I just got onto them and told them they weren’t playing to their ability and were playing down to their opponent,” says Abbott. “They needed to decide as a team what they wanted to do.”

The Titans came out in the third set more in tune with each other and with the plan in place and fought back to win the third set 25-18 to push the match into a fourth set and a chance to continue the swing in momentum.

Unfortunately, the Titans fell back into bad habits in the fourth set. While Custer County was sitting back defensively for big hits, the opportunity was open to score points off a softer touch on offense. Still, the team looked for big hits instead and the Bobcats were in place to make the needed plays to win the fourth set 25-22 and take the match.

“Hard kills don’t always work and they were not enacting what I was seeing and what would work,” says Abbott.

Following a break from play for the week following the match, Abbott got the team back workouts on Monday, October 18 as they look for a strong finish in their final two matches when they head to Sanford on Friday, October 22 and then finish the season against Gunnison, in Gunnison, on Tuesday, October 26.

“I’m excited,” says Abbott. “We’re practicing a new line up and moved some people around to ramp up our defense. I’m hopeful it’ll be a nice, strong rotation.”