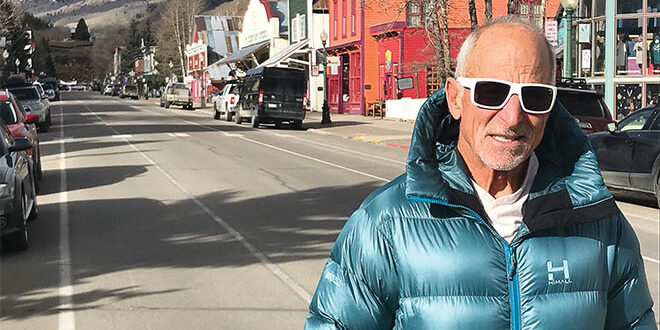 After spending 48 years living in Crested Butte, businessman Jeff Hermanson is jumping into the deep end to try and make an impact on the future of CB in a time he describes as “extreme change.” A former president of the Crested Butte Land Trust, Hermanson can still be found mountain biking the local trails or skiing the steeps on a powder day. He sat down last week at a local coffee shop after a weekend at Hartman’s to talk about his effort to play a part in Crested Butte’s future. As he said more than once, “You can sit at the bar and complain about what’s happening or you can try to do something about it.”
The following are some excerpts from our conversation.

MR: What’s your history with CB?
JH: I first arrived in 1973 and got a job working for Eric Roemer and Lynn Heutchy at Penelope’s. After three years, I opened the Slogar as a fine dining restaurant. It was way too upscale and pretentious, with white tablecloths and jazz music. Nine years later, I sold it to Mac Bailey, who immediately changed the concept to family-style fried chicken, creating one of the most profitable eateries in town — and schooling me in the restaurant world.

I also bought the Artichoke at the base of the ski area in 1979, and was a partner in Soupçon for a few years in the early 1980s. By the mid-eighties, I developed a restaurant company in Denver before acquiring Larimer Square in 1993. I spent the better part of three decades revitalizing Larimer Square, engaging with the historic restoration of Denver Union Station, and partnering with chefs to evolve my restaurant business. But I still spent a third of my time in Crested Butte, which I have always considered home. This is the place that nurtures my soul and makes me feel part of a community.

MR: You’ve recently put several places on Elk Avenue under contract (The Last Steep business and building, the Montanya’s building, the Breadery building and are in talks to perhaps become part of the Club at Crested Butte ownership). What was the motivation to leave the city and start buying property here?
JH: Even with multiple projects in Denver, I always return to Crested Butte. This is my home, and the pull is strong. But now there’s an even more important reason. Five years ago, my partner Theresa and I adopted Lilli, who was 4 years old at the time. Now she’s 9 and going to school here, and we’re committed to raising her in Crested Butte.

MR: So you chose CB over Denver to be a dad?
JH: We’ll spend a few days in Denver each month, but this town is very grounding and gives me a sense of peace. Raising her here definitely shifted my focus back to Crested Butte.

MR: Has it worked?
JH: Yes, with lots of validation. I’ve also learned from Lilli’s school activities. One example is the Mountain Roots garden. On Thursdays, the kids sold the vegetables they harvested at a little stand in the parking lot. It was great. At that time, we were creating an urban garden on the roof of the Larimer Square parking structure. The goal was to demonstrate that food could be grown in an urban environment, but it was also an opportunity to help children understand that food doesn’t just come from grocery stores.

This ties into one of my philanthropic areas, which involves changing the food paradigm. I’ve worked with We Don’t Waste, a Denver-based organization that distributes unused food from restaurants, caterers, grocery stores, and schools to those in need. I also co-founded the Good Food 100, which creates a rating system for restaurants based on sustainability and ESG (Environmental, Social and Governance) metrics.

Some people think that food insecurity is not being able to get a reservation on Elk Avenue, but in another reality, one in six people in the richest country in the world does not have enough to eat. Staying local and small may be the formula to solve the food challenge, which is why I’m now connected with Mountain Roots. Every one of us can make an impact in Crested Butte and the valley. Seeing the results is powerful.

MR: So you’ve gone from spending 75 percent of your time in Denver to 75 percent in CB?
JH: I’m in Denver about five days a month to spend time on my partnership with Urban Villages, a sustainability-focused development company that helped me create a lot of the magic in Larimer Square. Together we’re working on several transformative projects, including a hotel in Civic Center Park called Populus.

But most of my time is in Crested Butte. In many ways, the community is in an extreme state of change. It’s disheartening to see so many people we know move down valley or completely out of the valley. But at the same time, there are opportunities to make a difference for this community, and that’s what I’d like to do.

MR: So that’s why you’ve put so many Elk Avenue properties under contract?
JH: We can all play a role in shaping the next chapter, and hopefully we end up with a community that still possesses the values we appreciate. The Elk Avenue properties are part of this potential. Curating and placemaking is what I’ve done most of my professional life, and I hope to do that here. I’ve always been connected to Crested Butte, and am committed to the community.
Besides, I’m too young to retire!

MR: So do you want to open and run a bunch of restaurants in CB?
JH: We’re considering several possibilities. We could bring to Crested Butte some of the concepts we’ve done elsewhere, which would be fun. I still have 22 restaurant investments — mostly on the Front Range — in four restaurant groups. The Breadery is doing an excellent job and the Steep is going to continue with the same people running it for the winter, which will be great. I’d love to have a switch I could flip and put something in Montanya’s right away, but that’s not the case. If anyone has an idea, let me know.

MR: Is it all about the management?
JH: Management is essential, but the workforce is critical. And there’s no way any of this happens without making a big dent in the workforce housing shortage. We want and need to contribute to the solution. We plan to participate in the Request for Proposals for Crested Butte’s Sixth and Butte housing project, and we also have a 25-acre parcel of land on the west side of Gunnison going through the entitlement process. This is all part of trying to do something positive in this environment of extreme change. Between housing, the wealth gap, people being forced out economically, the food security issues, it’s an interesting time in the valley.

MR: Is it too much change coming too fast to be impactful?
JH: Change can be disconcerting, but it’s part of life. It’s like body surfing. If you go out in the water, you have to adjust to the waves. If you want it to be totally predictable, you can wait for a flat day. But then you won’t catch a wave. What’s fascinating about Crested Butte right now is that we can still impact the outcome. Like climate change, it can be daunting, but there are also a lot of encouraging things happening to counter complete pessimism. Crested Butte certainly has been discovered, but we have a chance to learn from places like Telluride and Aspen. It’s easy to dwell on the mistakes and lost opportunities, but we need to look forward. We need effective public policy that’s strategic and proactive, and engages the private sector.

MR: And that applies to the private sector as well?
JH: It applies to both sectors — and in the partnership between them. I’d like to make a difference in workforce housing, in curating local restaurants, in reducing food insecurity, and in raising my daughter in a wonderful place. Impacting those areas in a positive way is what matters to me. It’s all about change right now. You can sit at the bar and complain about it, or you can try to do something about it. And I want to try to do something about it.