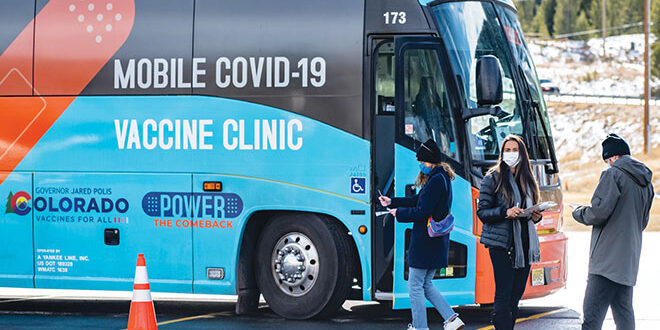 For the seven-day period between November 13 and November 20, 66 local residents tested positive for COVID-19. Case counts have now increased for two-weeks after relative stability for several weeks. For most of the late fall, weekly positives were hovering near or below 30 cases a week.

Gunnison County public information officer Loren Ahonen said cases are increasing across the region and state, and Gunnison is unfortunately, following the trend. “Incidence-rates and test positivity are high across the state and high in Gunnison County,” he said. “Many of our neighboring counties have higher case rates, but it is likely relative. Several of these communities also have substantially lower vaccination rates. With a significant increase in our own case counts locally, the focus is on continuing to mitigate risk in our own community.”

An early November hockey tournament that took place in Aspen is apparently impacting the Western Slope. According to the November 18 Aspen Times, the number of COVID-19 cases from an outbreak that started with adult and kids hockey games in Aspen two weekends ago rose by more than 50-percent on Thursday after new cases were reported from a total of six Colorado counties. The paper reported 27 more cases related to those hockey games played the weekend of November 5-7 had been detected outside the Roaring Fork Valley. That included 22 children and five adults. A total of 71 cases were reported tied to the tournament as of last week.

“Gunnison County Public Health is aware of a surge in cases amongst youth hockey and is working with parents, coaches, and the local organization to mitigate any additional spread,” Ahonen commented.

Ahonen emphasized that Gunnison County is pretty advanced in terms of vaccinations and that certainly helps mitigate the spread of the virus. “According to local data generated through the Colorado Immunization Information system, more than 74-percent of residents 5 years and older have received at least a first dose of the vaccine. In recent weeks Gunnison County has seen high levels of pediatric vaccine uptake. While the total counts are still being tallied as of this writing, pediatric vaccination has outstripped expectations in the first few weeks,” he explained. “In Gunnison County, more than 3,800 booster doses have been delivered. This is roughly a third of the total fully-vaccinated individuals in Gunnison County.”

The Gunnison Valley Hospital remains in a good, stable place according to Ahonen, but he said that is no reason to become lax. He said two people have been admitted to the GVH for COVID in the last 10 days.

“As Thanksgiving rolls around, we continue to recommend that our citizens consider vaccination, (whether first, second, or booster doses,” he said. “When gathering with others over the holidays, doing so in small family groups, where vaccination and ventilation are a priority is crucial. Consider opening a window or making additional accommodations to your holiday gatherings to improve ventilation while indoors. We also encourage testing for those who feel ill or are anticipating participating in a gathering with mixed-vaccination statuses.

“As the aprés ski season picks up, Gunnison County is supportive of Vail Resorts’ continued efforts to mitigate COVID-19 transmission in their operations,” Ahonen continued. “When transmission of COVID-19 is high, the measures we have all come to know over the course of the pandemic are effective tools for minimizing the spread in our community.”

In response to a high-volume of local residents seeking COVID-19 boosters, Gunnison County has expanded the hours of the 12/2/21 vaccination clinic. Vaccines will now be available from 3-6 p.m. at the Fred Field Center. This will be the last community booster clinic of December.

A reminder that booster doses are now available to any individual 18 and older who received a second dose of Pfizer or Moderna at least six months ago OR one dose of Johnson & Johnson at least two months ago. In the first two weeks that COVID-19 vaccine became available to those between the ages of 5-11, more than 22 percent of Gunnison County children in that age group have received a first dose. Additionally, 59 percent of 12-17-year-old children in Gunnison County have also received a first-dose.