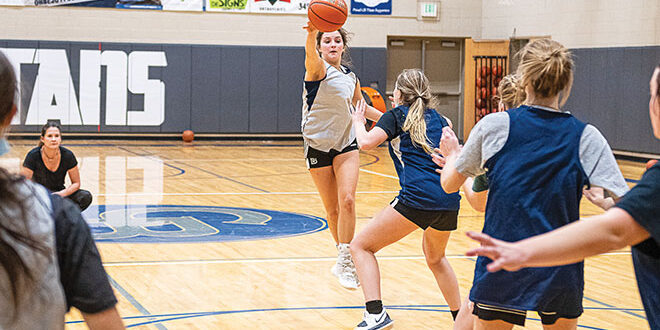 “They’re gritty, smart and not afraid of hard work”

It was a tricky season last year for the Crested Butte Titans girls basketball team given the effect COVID had on all high school sports. Seasons were shortened across the board in an attempt to fit all high school sports into the school year. Add in the fact that the Titans also had a new head coach, Amanda Reynolds, and that made things even trickier.

“It had its challenges because it was a condensed and intense season,” says Reynolds. “I threw a lot at them. But, they handled it.”
There just wasn’t much time to truly set the team’s philosophy in place or create an identity to build on, let alone prepare for upcoming games.

“You just didn’t have as much time to make changes where needed,” says Reynolds.

Reynolds is back this year and looking to continue what she started last year. And while she and her players are fortunate to have one season together under their belts, they also lost six seniors to graduation. But there is a silver lining.

“Our roster is going to look very different but I do have eight returners who took what we taught them last year and haven’t forgotten it,” says Reynolds.

A little over a week into preseason workouts and Reynolds has already noticed major steps taken by the team.

“Practices are going well and they already look like a different team than from day one,” says Reynolds.

Given her roster, Reynolds has a plan for the team, at least how she’d like to see them start the season.

“They’re quick and get down the court really well,” says Reynolds. “I think we’ll run a lot. And, we’ve got some good rebounders.”

Reynolds admits there’s plenty of work to be done, and with just 13 players on the roster, playing a fast-paced style of basketball can be tough. But, she sees something in her players that leads her to believe that they are up to the challenge and will do whatever it takes to get better and get the job done.

“They’re gritty, smart and not afraid of hard work,” says Reynolds. “All in all, they’re so dialed in to what they’re doing and I can do a lot with that.”

As is always the case, the Titans are in one of the more competitive 2A leagues in the state full of programs that live, eat and breathe basketball making for some serious league play. But given what she is seeing, Reynolds looks forward to the challenge and believes her players feel the same way.

“We have seven games before Christmas and by then we’ll have a good handle of who we are,” says Reynolds.