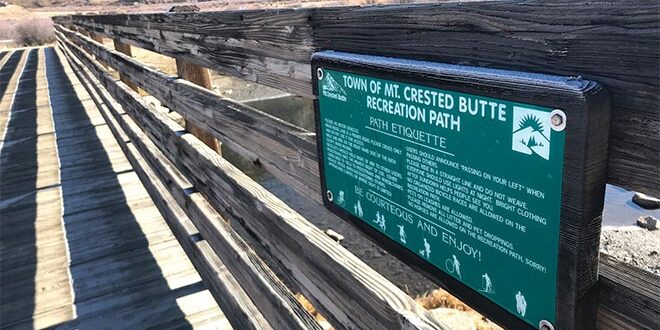 Crested Butte scratching its head over the request

The very symbol that connects the towns of Mt. Crested Butte and Crested Butte to each other is the very topic of disagreement between the two entities: ownership of the Rec Path around the Slate River Bridge.

Reeb explained that she recommended the town of Crested Butte take ownership, since this section is within Crested Butte’s boundaries and they will be making changes to the area.

“They do not want to discuss changing the ownership and maintenance of this bridge or the part of the Rec Path within their town boundaries,” she stated in a memo to council. “Staff has major concerns about the liability of this ownership not being transferred since they could undermine the structural parts of the bridge and they connect to the existing path in three locations. It’s improbable this will not impact our section of the Rec Path & Bridge, potentially costing our town money to repair.”

She continued, “The Town of CB is saying we own the easements, but there is no documentation to support that. Bottom line is our staff cannot take on another project to partner on this, so we would prefer this be streamlined to just one ownership and not overcomplicate it by trying to figure out how to ensure a smooth construction and future maintenance process. This is located in the Town of CB and should be a CB project. The Town has a history of too many documents which are difficult to navigate five-10 years in the future with confusing roles and responsibilities.”

During the meeting, Reeb reiterated that no one has been able to locate documentation saying the town of Mt. Crested Butte owns that section. “Everyone was under the assumption that there were all these easement agreements but that is not true,” she said. “They would like us to continue maintaining it and paying for it, which is a liability issue. I want to just cut the cord, this is our property and this is yours.” She told the council, “If you’re amenable to that I’d like to go back to Crested Butte and say this is yours.”

“I just feel like over the years we’ve kind of got the shaft and we did it because it was a good thing to do and that’s great but to what end?” said Reeb.

“Well I think to the end of getting people to our town via the Rec Path,” said Kempin.

“Yeah, but can’t we share that responsibility?” said Reeb. “I asked for support on maintenance of the path and they just said no. I just don’t think that’s fair.”

“It’s recognizing this very long-time partnership that we’ve had,” said Kempin. “And I understand that perhaps we’ve been bearing the bulk of that. I just wouldn’t want to be super harsh with them, just again recognizing this partnership we’ve had, the way the Rec Path connects our communities; everybody in CB and Mt. CB uses that Rec Path… I just hope that it could be put to them in a way that recognizes that.”

Council member Roman Kolodziej agreed that the liability issue was a concern. “But I wouldn’t be opposed to continuing the general maintenance of that stretch but not having any liability or ownership of the thing,” he said.

“You can’t really do that though,” said Reeb. “You’ve got to just cut the cord. This is where all of our agreements are so convoluted because we’re always trying to make it good for everybody and then it becomes this web of messes later on.”

Crested Butte a bit baffled by request
Crested Butte town manager Dara MacDonald told the CB council at its November 1 meeting that she had received the somewhat unusual request from Reeb who suggested the town of Crested Butte take over being responsible for the Rec Path Bridge located on the edge of Paradise Park. MacDonald said she responded that the town had no interest in overseeing the bridge that was part of the Mt. Crested Butte Recreation Path project. “Bridges are expensive,” she told the council.

MacDonald explained she had given Reeb a head’s up that Crested Butte was planning some improvements around the bridge to better define public access to the Slate River but “we explained the project to improve river access will not impact the Rec Path. The plans do not include any modifications to the bridge.”

Crested Butte mayor Jim Schmidt took offense at the attitude expressed about the bridge and the relationship between the two communities.

“As someone who was involved in the connection of the Mt. CB Rec Path to the town of CB instead of someone who is imagining how it went 20 years later, I’m very dismayed by the comments and actions of Isa Reeb regarding the Rec Path bridge,” said Schmidt. “To say that Mt. CB has been getting the shaft displays a total insensitivity to the relationship between the two towns and the efforts we have made to work together. The goal of Mt. CB was to build a path to connect the two towns and Mt. Crested Butte built the concrete path, which unfortunately was in fact a path that dead-ended in a wetland. CB engaged with three different developers in regard to the Verzuh Property with the connection to the path always being one of the primary requirements of annexation. After the long and arduous annexation negotiations were completed, Mt. CB town manager Chuck Stearns requested permission to construct the Rec Path and build the bridge as they had grant money from the state to do so. Permission was given by the CB Council and the “path to nowhere” connected the two towns after eight or nine years. It was and has been a great amenity for the entire valley.

“The two towns have worked together in the past for the betterment of the entire community,” Schmidt continued. “The Mountain Express for instance is paid for by both towns with CB putting in a couple of hundred thousand dollars more than Mt. CB. The Chamber visitor centers have been financed with Mt. CB putting in a little more than CB. The bridge was a cooperative effort for the benefit of the complete valley. The new manager of Mt. CB doesn’t seem to understand that we need to work together to make this valley a great place.”