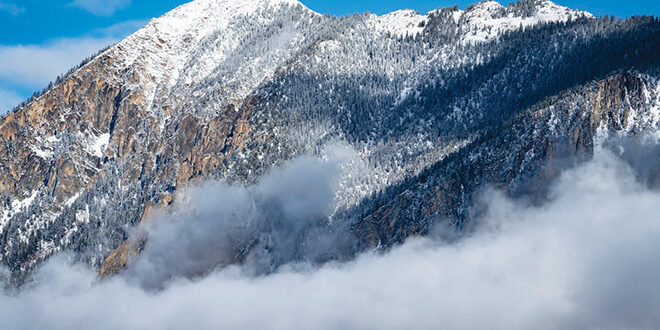 I did pop up to the bottom of Warming House Hill at CBMR and was frankly impressed with what appeared to be the skiability of the hill. An old school ski instructor was showing around some new people and described it as the “Ribbon of Death.” That’s a bit of an exaggeration, at least the death part anyway. It is indeed a ribbon and it will probably be crowded at times. You definitely don’t want to fly off the edge. Ribbon of Mayhem might be more appropriate. I got my first turns in before the lifts were spinning — sort of like Titans soccer coach Than Acuff who I saw on my FB app had hiked up and skied Mt. Owen with his heavy state championship trophy on his birthday. Sort of — I hiked up to Red Lady and skied down for coffee with a participation ribbon instead of a state trophy.

But the point is there is skiing to be had. And we are a ski town. Not that I’ve put away my bike shoes yet since I see on a phone app it will be in the 50s in Gunni next weekend and there is nothing wrong with making turns in Graceland when it’s sunny and 55 except it’ll be December.

I am reading Powder Days by Heather Hansman at the moment and while she extolls the ideal of being a ‘ski bum’ she rightfully worries those days are waning. She reasons that ski town issues like housing, wages and the corporatization of the ski industry — not to mention Climate Change that may or may not be impacting the quality of the opening day ribbon — is decimating the old ski town culture. But we’re in Thanksgiving mode so we’ll save the hot button topics and the apparently not so cold reality of climate change impact on ski bums and ski towns for another time…

Walking the dogs before bed the other night I huddled up in the crisp air knowing the snow guns were blowing. I saw Jupiter shining bright and my phone’s sky view app told me we were walking beneath exotic points of light with names like Rastaban, Enit, Dipda and of course Polaris. It was beautiful.

It reminded me of the postcards I read earlier in the day that local first graders wrote to their parents. You can see them on page 21. The little kids thanked their parents for their life in the valley, for just being able to live here, for the fresh air, their siblings and pets, for the fun and the oxygen. They are not wrong. They are incredibly lucky as are most of us who have the opportunity to live and work or just visit here. It’s rarely easy but it sure is worth it. It is a different life and while the kids growing up here may not know it now, they’ll understand as they move to the ‘real world,’ whatever that is. It may be getting harder but that is why we all must keep working together to figure out how to keep that fortune viable for more than just the extremely wealthy. More topics for future editorials.

And frankly, that’s one reason some people struggle here. It’s not perfect and can at times be really, really hard. It’s a real place with real people with real problems and mental health issues are not rare in mountain towns like ours. The common mantra is that for anyone struggling with those issues, they should know we are all in it together. We are better together. There are places and people who can help get you through a rough time. We have all lost too many of our friends to depression. On Tuesday, November 30 at the CB Center for the Arts, CB State of Mind and Gunnison Valley Health are holding a community meeting to have a conversation on why “mental health matters.” Do not be afraid to show up and share. That too is part of our reality. If you feel the need to talk, call the confidential crisis hotline at 844-493-8255.

So for now, be as thankful as you can and help those in the community that need it. Spread the love. Cultivate gratitude. Also remember places like this have always been based in hope. The miners relied on hope to come here and look for silver and gold. Ranchers hope the price of beef makes raising cattle in the high country worthwhile. We all hope for a big winter to provide sustenance and the soul that comes from skiing powder – or groomers – or steeps. Workers and business owners hope for a season where they can bank the tips and season’s earnings to get through the off-seasons that allow them to live a unique life out of a cubicle and far away from a mall. Hope is a constant in this high mountain valley and there are few better places to hope.

This week the ski area opened with a strip of snow and four inches of fresh. But have some optimism — real winter will come. Lily Lake will turn white again. I anticipate the costumes to come out, the snow dances to commence, the sacrifices to Ullr to begin any minute. In the meantime, find the turns where they are —be it on Peanut, the Mt. CB Rec Path, or the Sea of Sage. Celebrate living in a place where you can do all of them in the same day and where when the sun goes down, the stars and planets guide your night walk as brightly as anywhere with a zip code. Be thankful for being in a weird but special place that some people can’t even dream of.

We’ll get to the hard issues soon enough but today, be thankful. Be grateful. Have hope. Make some turns with your trophy or participation ribbon and be proud. Here’s to the start of another season!