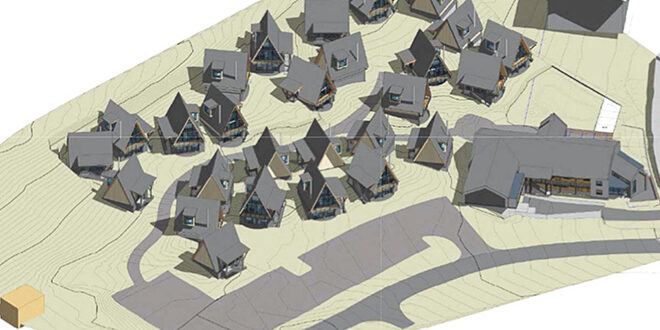 The Nordic Inn, which has gone through several proposed iterations for a major alteration planned unit development (PUD), has a new proposal that would give the existing building a makeover and add cottage-style lodging to the property.

The latest PUD approved by the town in 2019 called for a 132-room, six-story hotel and covered parking garage. However, the applicant, Pearls Management, took a pause on the project during COVID. During the November 2 Mt. Crested Butte town council meeting, the Nordic Inn team presented the latest revamped concept plan, which would consist of renovating the existing Nordic Inn, adding five affordable housing units and developing 27 A-frame cottages. Overall, the council was pleased with the new direction away from the large hotel.

“It’s been kind of a rocky road the past couple years due to COVID,” said Gary Hartman of Sunlit Architecture. “[The applicant] wanted to come forward with something that wasn’t a large hotel but something much more palatable for the community and would be more sympathetic to the town.”

Hartman explained that the cottage style development would be a smaller scale both in footprint and in massing, be less impactful on the neighbors and bring less traffic and parking demands.

The existing Nordic Inn includes 27 hotel rooms and one standalone cottage. The previously approved PUD called for a hotel with 132 rooms, nine affordable housing units and a 220-space covered parking garage. The new proposal would develop 27 cottages, renovate the existing structure to include eight hotel rooms and five affordable housing units and include a parking lot with 68 spots.

The concept would create a series of four little neighborhoods, Hartman explained, each with its own fire pit, hot tub, grill and outdoor activity area.

“When somebody comes in to check in, their bags will be collected by an electric car and taken to one of these neighborhoods,” said Hartman. “There is no automobile traffic intended to access the interior of the site.” However there would be a loop road scenario, as requested by the fire department.

The current building would keep the existing hotel rooms on the south side and include the affordable housing units. The renovation would include a new check-in facility, ski lockers and valet, laundry facility, dining room, kitchen, bar area and activity center. Developers are also interested in putting in a pool that would become an ice rink in the winter.

The style of the building and A-frame cottages would still reflect the Scandinavian architecture from the previous PUD. Each cottage would be three-bedroom, with two bedrooms and a bathroom on the basement level, living room/common area and kitchen on the main level and a master suite and bath on the top.

The PUD consists of lots NI-1, NI-2 and ROS-1. Because the town owns the ROS-1 parcel, part of the original PUD deal was that the covered garage parking would include 78 public spaces for town parking. “Public parking is not part of this application,” said community development director Carlos Velado.

The Pearls team noted that there are still some details that will need to be hashed out regarding parking and affordable housing obligations from the previous agreement.

“Because we are moving away from the hotel…that means that we need to address what happens with both ROS-1 and that development agreement,” said Aaron Huckstep with Huckstep Law. “What I have told Isa (Reeb, town manager) and Carlos is we would prepare a term sheet or letter of intent that says, here’s conceptually how we’d like to handle it.”

The new PUD proposal’s inclusionary zoning minimum affordable housing requirement calls for one unit, but as a possible ROS-1 solution or compromise to the parking agreement, would include four additional affordable housing units for a total of five.

“So of the five units being proposed, one of those is required then the other four units are basically what we could do on ROS-1,” said Reeb. ”When we initially met and saw this new plan I felt from a planning standpoint in looking at our Master Plan that this is much better than having the shared parking garage. It’s self-contained and there’s no confusion or complicated agreements that have to be in place. The development meets a lot of the goals of the Master Plan.”

“Would the applicant be open to allocating a certain number of A-frames as affordable housing in an attempt to be able to house more people?” asked council member Steve Morris.

“We’re certainly happy to take it back to them,” said Huckstep. “Our estimate of the construction cost per square foot is between $450 and $650. That is part of the challenge.”

“It comes up short in parking for what our parking requirements are,” said Velado, estimating it’s roughly 25-27 spaces short. “That’s something we’ll have to look at.”

Hartman explained that the plan calls for two cars per cottage, one per hotel room and the remaining for affordable housing units.
“I think that’s a good observation because that’s something I’m definitely concerned about,” said Reeb. “Our history with short-term rentals is that people all show up with private vehicles.”

Hartman said there was a possibility for the surface lot to become a two-story parking garage.

The council was happy with the new direction, but noted their concerns over the limited parking and figuring out the town’s agreement with parking versus affordable housing.

“This looks a lot better,” said council member Lauren Koelliker. “It’s cognizant of what the original zoning was and the concerns neighbors brought.”

“We’ve got some work to do but we’re on a good track,” said mayor Janet Farmer.

With the concept review under their belt, the applicant will now move into a formal PUD application process.