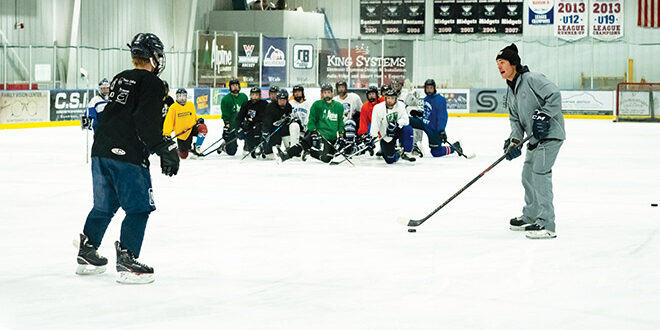 The Crested Butte Titans hockey team had a prolific season last year winning the league title with a record of 9-0 and reaching the 4A state finals.

This year, they are back at it once again and chomping at the bit to get back to action. So much so that several players spent the fall playing in a club hockey season as part of the West Elk Hockey Association and are now on the ice as the Titans for preseason workouts.

“Shane (McGuinness) and Matt (Prudhomme) did a great job with the kids in the fall,” says head coach Billy Watson. “To be able to work out the kinks and the rust is huge.”

The Titans have 27 players on their roster this year and Watson is planning to carry three lines, two sets of defensemen and an extra player or two on the varsity roster with a handful of those players getting time in both JV and varsity games.

“We will double-roster some players but that just means more time for them which is good,” says Watson.

The team did lose some punch to graduation from the squad last year but some elements are still in place and Watson, and his coaching crew of McGuinness, Prudhomme and Bob Piccaro, has a foundation to build on.

“We need to make a few tweaks,” says Watson. “We got some different personnel but we’re a fast team and we will build our systems around that, use our strengths.”

The coaching staff also has a volunteer goalie coach, Ryan Taylor, for the first time to work with the goalies this season adding a key element to their preparation.

“We’re looking forward to that and having him work with our goalies,” says Watson.

Furthermore, they do have some veteran players returning and some up and coming younger players mixing it up, and some who are ready to step into bigger roles.

“We need to get our systems in place but the young guys are picking it up and the older players are helping out a lot,” says Watson. “We lost five of our top players but we definitely have a few kids reloading getting better and better.”

The Titans open the season on Friday, December 3 at home when they host Cheyenne Mountain, the same team they beat in the semifinals of the state tournament last year. It should be quite the season opener for the Titans. The puck drops at 6:15 p.m.