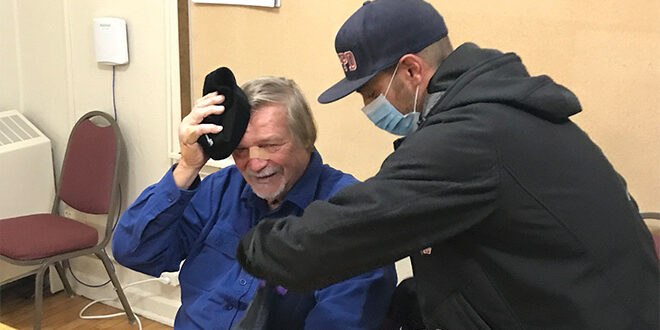 Rough sendoff for Deli’s final meeting as mayor of CB

After serving 31 years on the Crested Butte town council, 10 as mayor, Jim Schmidt stepped down and was honored with a proclamation declaring November 15 as “Jim Deli Schmidt Day” at the November 15 meeting. The reality of the night hit him like a ton of bricks, or literally a ton of concrete, as Schmidt tripped and fell while on his way to the meeting giving himself a major contusion on his forehead that swelled up quickly.

Not wanting to admit his trip, Schmidt explained to those at the council meeting that he actually had to fight off a bear on the way to town hall. He presided over a one-hour work session and opened the regular meeting with an ice pack firmly pressed against his forehead. Not only were his eyes welling up with emotion for his final meeting, his entire face was swelling up with a big bruise.

By the time the cake was presented, chief marshal Mike Reily had alerted local EMTs who checked out the now former mayor. Ultimately the swelling continued and his wife drove him to the Emergency Room where he had a CT scan. He spent the end of “Jim ‘Deli’ Schmidt Day” at the Gunnison Valley Hospital where he admitted CT scans on his head “found nothing there.”

He was released Tuesday morning and was advised to postpone his flight to Maui for at least a few days as well. We were not able to get a comment from the bear he allegedly fought off to make the meeting but in the sense of “you should see the other guy” we figure that bear is ready to hibernate well into next year.