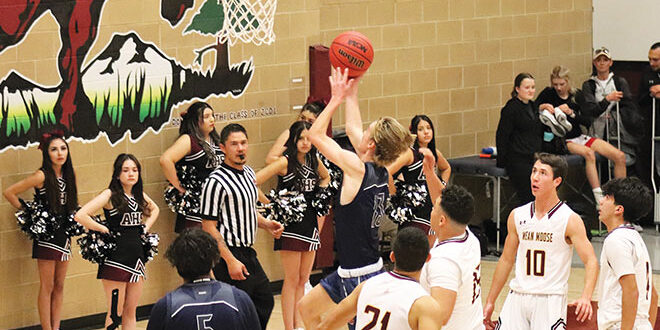 Boys basketball poised to break out for league play

The Crested Butte Titans boys basketball team continues to search for its second win of the season but all is far from lost as they made massive strides this past weekend against some stout 3A non-league opponents.

“We knew going in that it was going to be a challenging weekend,” says Hannes Gehring.

The Titans headed to Alamosa to face the Alamosa Mean Moose on Friday, December 17 still down a player as starter Grayson White remains out with an ankle injury. Nevertheless, the coaching staff continued to impress upon their team that patience on offense was key and the Titans were down just four points at halftime to the Mean Moose.

A slow third quarter by the Titans would eventually lead to their demise. The Titans opened the quarter with two long possessions as they’ve been coached but both resulted in turnovers. Alamosa then turned it up a notch to hold Crested Butte scoreless the entire third quarter building a 38-20 lead. The Titans stayed true to their course though to score 11 points in the fourth quarter but the damage was done as they fell 54-31 to Alamosa.

“Seeing the kids play unselfishly was the best thing I saw,” says Gehring. “We talk about moving the ball and making that extra pass to get a better shot and they’re starting to buy into it.”

Despite the loss, the Titans held their heads high in the locker room as they got a glimpse of what they’re capable of, it’s just a matter of consistency. As a result, they headed into their game against Centauri, ranked top 10 in 3A, the next day still brimming with confidence.
“Their mentality was, let’s go get them,” says Gehring. “That resiliency was uplifting.”

Centauri looked to blow the game open early and flirted with it but the Titans refused to give in and by halftime, Crested Butte was down just five points.

“We were right there,” says Gehring.

Unfortunately, the Titans suffered another tough third quarter as Centauri started to pull away outscoring Crested Butte 19-8. Remarkably, the Titans still did not give up and started chipping away at Centauri’s lead to cut it down to single digits.

“If things don’t go our way we lose confidence and it started bubbling up but we just kept battling,” says Gehring.

But as the game wore on, the Titans had to foul to stop the clock and Centauri knocked down their free throws to finish off the Titans 49-37.

“The weekend was more about, did we improve, did we get better? And it’s a resounding yes,” says Gehring. “It was the best, by far, that we’ve played as a team and we were able to show what we’re capable of.”

Much of the team is sick or getting sick as they enter the holiday break so Gehring is looking for the team to get healthy and will then get back to work on January 3 as they start league play against Trinidad on Friday, January 7.

“If we play to the level we played at last weekend, we should fare well in league play, these kids want it,” says Gehring. “We just have to put the pieces together and prove it on the court.”