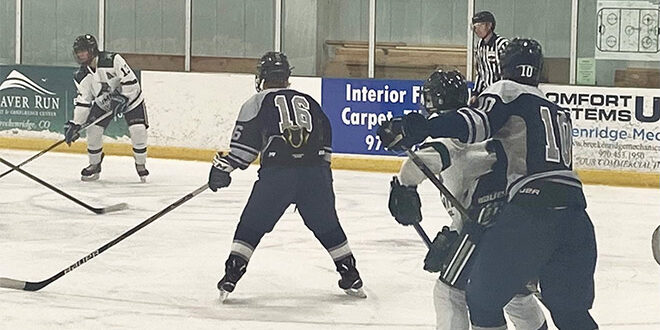 Titans hockey notches first win of the season against Summit

“They came out in the third and put everything together”

After falling to stout opponents in Cheyenne Mountain and Steamboat Springs to open the season, the tough games made for better hockey from the Crested Butte Titans hockey team and they put it all together to take down the Summit High School Tigers 5-2 on Saturday, December 18.

Cheyenne Mountain and Steamboat are currently ranked one and two respectively in 4A hockey and while the Titans played well against them, the losses still stung but they shook it off to prepare for their upcoming game against Summit.

“Morale on the team was okay,” says coach Billy Watson. “We always try to learn from our mistakes and those games were great opportunities to learn. The kids were feeling down but we kept it positive throughout the week to get ready for our first win.”

The two teams traded penalties but no goals through the first 15 minutes of the first period until the Titans opened the scoring in the 16th minute when Connor Zummach found the back of the net for his first varsity goal but the Tigers responded 19 seconds later and the teams were tied 1-1 heading into the second period.

“I thought we were a little hesitant in our defensive play and got into a little penalty trouble but we weathered the storm,” says Watson. “There was some frustration at the end giving up that goal.”

The Titans retook the lead six minutes into the second period when Jack Lambert scored on a power play but Summit came right back again scoring a minute later to even the game up. The two teams continued to battle back and forth until Crested Butte struck again when Cael Medina scored off an assist from Brendan Hartigan to give the Titans a 3-2 lead with one period left to play.

“That goal to put us up at the end was huge,” says Watson. “The energy was pretty high in the locker room.”

Penalties on the Titans through the first 10 minutes of the third period had Crested Butte skating on thin ice but their penalty kill unit came through again to hold off Summit. The Titans finally tacked on an insurance goal when Rocky Marchitelli scored his first varsity goal on a power play in the 10th minute to put Crested Butte up 4-2.

“That was the first varsity goal for both Connor and Rocky and it’s great to see people contributing to the score sheet,” says Watson.

But the penalty bug hit the Titans again as they had two more penalties to kill off down the stretch. Once again the penalty kill unit came through to hold the Titans’ lead and when Summit pulled their goalie, Medina sealed the 5-2 win with an empty net goal. Crested Butte goalie TJ Wonnacott finished the game with 24 saves.

“They came out in the third and put everything together,” says Watson. “The penalty killers we have going now are doing it well.”

The Titans have one more game on the road before the holiday break as they head to Denver to face another tough 4A opponent in Colorado Academy.