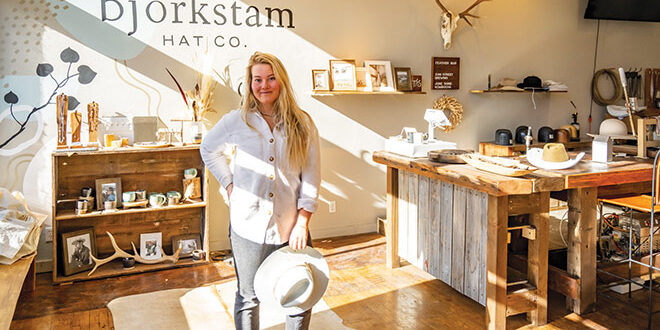 Elle Truax grew up surrounded by the lush orchards and vineyards nestled along the banks of the Columbia River in Hood River, Oregon, where breweries and watersports are fostered. Despite being quite a distance from the coast, the area is known for its windsurfing and Elle proclaims kitesurfing the Columbia Gorge was her passion. “You rig up on the Oregon side and surf into Washington,” she says. Both Elle’s parents were environmental engineers – her mother focused on air quality and her father on water quality. Her dad grew up skiing the icy East Coast resorts, but her mom hit the slopes around the Seattle area and Elle laughs, “She kicks his ass skiing.”

As a kid, when it was time to stash away the board and kite for the winter, Elle dove into her other passion, ski racing. She joined the local Mt. Hood team when she was 7. “I was the kid who would throw a fit when I had to go in to eat lunch because I just wanted to keep skiing. I’m pretty competitive, so I grasped the sport early on,” she says. As a freshman in high school, she was successfully competing.

Elle recalls the regimen of hard core ski racing discipline. “In the summers you’re in the gym working out and during the winters you’re training all the time,” she explains.

Her dream was to be an Olympic ski racer so when she won an academic scholarship her high school sophomore year to attend the prestigious Rowmark Ski Academy in Salt Lake City, it made it affordable for her family to find a way to fund the rest of the expenses. “I was ecstatic. It was a big deal, especially financially,” she tells. “My family has worked hard for everything we have.”

She arrived in Salt Lake City in August of 2013, living with a host family. “School was so hard and I was training with the ski team every day after school. We’d do a lot of outdoor training, like road biking and running.” It was October, just before the team’s scheduled trip to train on Colorado resort slopes, when Elle’s dreams were literally shattered.

“We were road biking up Emigration Canyon. I was doing warm up laps, crossing the road to group up to start the ride,” when a speeding car T-boned her at 40 mph. Her bike went under the car and Elle flew up on top. “I remember being in the air thinking, I’m going to die if I don’t land right. I landed on hands and knees and my left patella took most of the force.” Elle’s kneecap shattered. “I had so much adrenaline that I got up and walked to the side of the road.” She describes a traumatic scene where her teammates were crying and her coaches came running. “I remember, being on the ground, looking at my kneecap. It’s about a week before we go to Colorado to start on-snow training. I was totally in denial saying, I’m going skiing, I’m fine. I wasn’t paying attention to the pain, I was just pissed.”

Her team had to take off without her. After multiple surgeries, wires and screws, a massive brace and in a wheelchair for a month, Elle was determined to still get out on the slopes. She began upper body workouts, building her strength, along with intense physical therapy. “I’m frustrated and in disbelief. I’m nagging the doctors about when can I ski.”

Incredibly, she was able to strap on her skis in February but she says, “I couldn’t do anything. I was just sliding around. My knee wasn’t strong. I couldn’t ski a race course with my team.” She was cleared to ski for real in March. Her goal was to qualify for Junior Olympics at the end of March in Alaska. However, she missed the qualifier by one spot. “I wasn’t ready to compete at that level yet. But it was still quite an accomplishment,” she says, rightfully proud.

With mounting hospital and medical bills, Elle was maxed out financially and emotionally and didn’t return to the academy for her junior year. She finished out high school at Mt. Bachelor Ski Education Foundation in Bend, Oregon, where she graduated a semester early in 2015 and took the opportunity to simply ski through her final semester of high school. “I’d go up every day. I started to freeski a lot, skiing with people who were better than me, going off cliffs, doing 360s. I became a really solid, all-round skier. It wasn’t about ski racing anymore, it was more about having fun.”

Taking a gap semester before college, Elle traveled to Chile for two months to freeski at Portillo and, “to find my passion again.” She stayed with a Chilean friend in Los Andes. Fluent in Spanish, she was able to work in her friend’s family bed and breakfast in exchange for housing. While in Chile, she decided to attend Western Colorado University in Gunnison because she had several friends from Hood River at WCU. “I heard they had a Big Mountain Freeride ski team.” Elle was accepted into WCU with a scholarship as a Borick Scholar, arriving on campus in January of 2016.

She joined the freeride team for Big Mountain competitions on the freeride world qualifier tour. She hadn’t even seen Crested Butte yet. “The first time I ever skied CB was on Headwall as a forerunner for the competition. I couldn’t believe all that was so close to Gunnison. I instantly fell in love and everyone was there because they wanted to be,” she says. Elle had her revelation, “I decided it’s what I really wanted to do. My passion shifted away from the U.S. Ski Team and the Olympics to freeride and big mountain skiing.”

Elle began competing that first semester. “Ed Dujardin was my coach, and I was stoked. Our trainings were serious. We’d push ourselves. Ed would be at the bottom of Body Bag screaming at me to huck myself off of whatever was in front of me. Things like that are such a good feeling after you do it,” she laughs. “That’s my whole experience in freeride, you’re really so scared but it’s so rewarding.”

Every summer Elle returned to Hood River to kiteboard and work, becoming certified as a wildland firefighter, fighting fires in California. “But it was traumatizing for me, it was a wake up call. I was a little 18-year-old girl fighting fires with all these creepy guys. I felt uncomfortable. Someone broke into my truck and stole all my gear. It made me decide to go back to WCU and get my degree and have a different job to support myself.” She graduated in 2019 with a business major in marketing and a minor in communication.

“I wasn’t sold on CB yet and I was a broke college kid. I wanted to live the life I wanted to live,” Elle says and moved back to Hood River, getting a job in the marketing department of Naish Kiteboarding Company. “It was a full-on nine-to-five behind a desk all day. But it was a dumpster fire for me. I couldn’t ski.” And she admits, “It was back to the Pacific Northwest cement snow.” Then COVID hit that spring of 2020. She missed skiing in the Butte, so she moved back that September, working at the Dogwood and remote part-time marketing with Smak Strategies.

Another realization recently led Elle to her new business endeavor, “I’ve always worn wide brim hats and there weren’t any hat shops in Crested Butte like there are at most ski towns,” she noticed. She took off for Denver to gather info and instruction on becoming a milliner. “I wanted to learn to make hats and get insight as how to make them. I always admired the work of hatter Nick Fouquet,” she says, researching his hats and videos online. “His hats are extremely expensive,” she describes some of the famous milliner’s methods of steam shaping, taking sandpaper to hats, and using fire to give smoothness and shine to his felted creations. “I thought that was so cool.”

Serendipitously, Elle met a hat toolmaker who gave her a hat block and some felts and a Tennessee milliner’s phone number who also tutors. She was on the plane the following week for an intensive workshop with the master, after which she began to drain her savings to set up her Elk Avenue shop, Bjorkstam Hat Company (Bjorkstamhatco.com, also on Instagram and Facebook). “Bjorkstam” is Icelandic for birch tree and as a child, Elle had an enormous one with a treehouse. But more importantly to her, it’s a dedication to her mom, whose surname is Bjorkstam.

“It was a turning point to risk everything to get the mandatory machinery. The CB Center for the Arts came through with a temporary winter workspace,” in which she cranked out hats all off-season to prepare for her June 4 opening. Elle partnered with Caitlyn Ward of Lonewolf Collective who makes hatbands for her creations. “Everyone in town was so supportive. I realized through this process that CB is my home. Making hats here in Crested Butte made it feel like home and I felt like I had a purpose. Everyday is a new challenge that I love. I’m so thankful for this community and friendships that I’ve grown.”